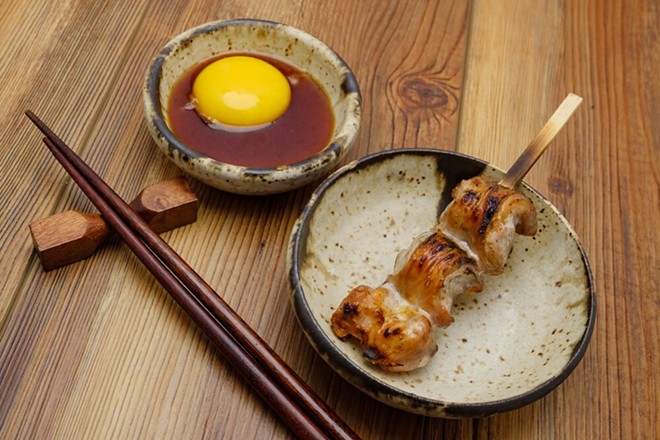 “We had a real challenge to take a beautiful fine-dining Japanese space and turn it into a beautiful Japanese bar,” explains Spinner, who says that the finishing touches are just now being applied.

The overarching objective was to transition the property from an exclusive fine-dining establishment with long dinners and lofty check averages to a fun, casual and affordable pub experience that showcases a different side of Japanese culture, adds Spinner.

“This is part of the culture that you may not have seen before,” he says. “It’s fun and drunken and loud and bawdy and it’s a blast and we’re watching baseball with our friends. That’s not strictly an American thing; that is absolutely a Japanese tradition as well.”

Guests will see the same footprint, with high-backed booths on one side and the bar on the other, but the room has been painted black with pops of bright orange. The galvanized aluminum bartop has been replaced with warm maple wood, as have the tabletops. Behind the bar hang three new screens for sports. A new draft system will deliver beer, cider and cocktails on tap.

The kitchen has been remodeled to accommodate this new concept and food menu. Front and center is the imported yakitori grill that will turn out skewers of grilled and glazed chicken thigh, breast, tenderloin, wing, liver, heart and meatballs. Those classic yakitori items will be joined by grilled or tempura-fried vegetables like eggplant, shishito peppers, oyster mushrooms and cherry tomatoes. Slightly more expensive specialty skewers range from tuna-stuffed peppers and jumbo shrimp to pork collar and top-quality Wagyu.

Those items will be joined by one daily feature like fried pork katsu or tempura fish.

“We’ll be open from Wednesday to Sunday and each day will have an assigned plate,” says Spinner. “One of the things we became well known for at Ushabu was a complete lack of consistency – not in terms of quality and service, I hope – but with respect to certain dishes. One of the things that we’re striving to change that Ushabu regulars will notice is we’re shooting for straight up-and-down consistency.”

Spinner makes a point of saying that the closure of Ushabu was not a verdict on its chances of survival, but more of a way to keep moving in a way that excites him.

“I would be lying if I said that a few tears weren’t shed on the last day of Ushabu; we poured everything that we had into that,” he says. “But I think the resounding emotion that Dave and myself and everybody else involved share is excitement for the future. I’d rather be on the front end of things and forever changing than kind of waiting to see if it works. What we are shooting for, and what means something to us, is to give a sense of continuity and normalcy and fun at an approachable price point that people can latch onto while continuing to celebrate Japanese food.”