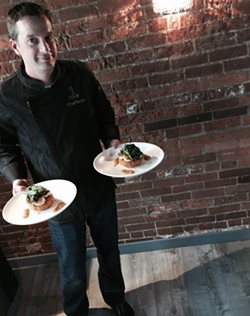 The iconic Matchworks Building in Mentor has seen more than its fair share of restaurants over the years. Concepts such as the Perfect Match, Blue Tip Grill, Wallaby’s, Match Works Tavern and Harry’s Hofbrau House have come and gone over the past three decades.

Come May 1, Fourk will occupy that notable structure, but this new restaurant has more than a few things going for it that most of its predecessors did not. For starters, chef-partner Ryan Scanlon’s experience has provided him not only with the culinary chops to turn out great food, but also a pragmatic mindset that will likely appease the diners who walk through his door.

A graduate of Johnson & Wales University, Scanlon was the first employee that Burntwood Tavern founder Bret Adams hired. Scanlon served as opening chef of the original Chagrin Falls location plus many others that followed before becoming Regional Culinary Manager for all of them. But after seven years at Burntwood, Scanlon jumped at the opportunity to open his own place.

“It was time to branch out and do my own venture with different food, and this project seemed like a good adventure,” he explains.

He partnered with Marc Wertenberger, the owner of the building, who has invested a significant amount of time and money renovating the historic structure. Past restaurants all suffered from a rambling, dark and tired interior that seemed out of step with the times. Not any more, says Scanlon.

“You won’t recognize the building now,” he says.

The crews stripped away the dark wood paneling, pulled up the carpeting, demoed many of the small nooks and crannies, created a seamless, one-level space, and laid down new hardwood flooring. Now guests will experience a space with a modern-industrial look with steel accents, concrete bartop and cool color patterns.

“Fourk” is play on words, the chef says, referring both to the four different food groups and the eating utensil. Scanlon describes the place as a modern American tavern, where classic dishes will be tweaked just enough to make them sing.

In the starter department, empanadas will be stuffed with lobster and topped with slaw and homemade hot sauce; BLT sliders feature thick-cut bacon and marinated tomatoes; Indian naan is topped with chorizo and goat cheese; tacos are filled with tuna ceviche and jalapeno lime slaw.

The sandwich category includes a bacon and cheese burger with an egg, a meatball and mozz sub, a fried fish sandwich with avocado and jalapeno lime slaw, and Cubano-style sandwich stuffed with cola-braised pork shoulder, Havarti cheese, Dijon and pickles.

For the mains, items like steak frites with salsa verde and grilled asparagus, brick chicken with mashed roasted cauliflower, and seared scallops over risotto cakes with peach and cracked-black pepper sauce are likely to hit home with diners. Also on the menu are dishes like fish & frites, salmon and polenta fries, and Cioppino-style seafood and grits.

All of the above is matched with a progressive beer, wine and cocktail program.

Ironically, Scanlon worked in these very kitchens as a young chef, back when it was the Blue Tip Grill. This time around, he’s in charge, and he intends for Fourk to be a fixture of the community for many years to come.

“I don’t by any means expect to start out of the gate full bore, packed-house every night,” he says. “I think it’s going to take some time to regain people’s trust around here and prove that we’re not those same places. I can’t speak to why some of those other restaurants were or weren’t a good fit because I wasn’t there, but we’re going to try and provide a fine-dining level of service but in a casual atmosphere.”

When it opens on May 1, Fourk will serve lunch and dinner seven days a week.