Dinner at Empress Taytu is one exotic interlude. 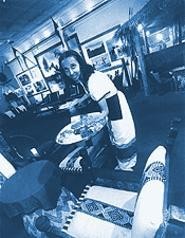 Walter Novak
Empress Taytu: A short trip to a faraway place.
The East African nation of Ethiopia is home to unique and exotic cuisine, with foods and culinary traditions dating back more than a thousand years. And although recent decades of civil war and drought have burdened the country with a desperately poor economy, its history and culture, with Indian, Greek, Roman, Egyptian, and Semitic influences, remains rich and vibrant.

Vegetables and grain play the starring roles in the Ethiopian pantry, but beef, lamb, chicken, and fish occasionally find their way into the kitchen. Flavors are intense, fiery, and complex, with a sophisticated spice blend -- berberé -- seasoning many of the dishes. Communal dining, without benefit of flatware, is commonplace; rather than spoons and forks, pieces of injera (a flat, rubbery bread made from t'eff, the native millet) are used to scoop up mouthfuls of the stewed foods that form the basis of the diet.

While this type of dining experience is far from commonplace in Cleveland, home of pierogi and fried walleye dinners, sophisticated tabletop travelers know that culinary adventures of the first order await them inside the stucco walls of the delightful and impressively authentic Empress Taytu, the city's only Ethiopian restaurant.

While the spicy cooking might not be to everyone's taste, a dinner here is about as far as you can get from Northeast Ohio without a passport. Come in the back door, from the restaurant's small, fenced parking lot, and take a peek into the open kitchen, where nearly everything is made from scratch. Inhale the perfumed air, heavy with the aromas of incense and seasonings like bishop's weed, rue, and "holy" basil. Pull up a carved stool to one of the traditional mesobs (sturdy, intricately woven basket tables), and cleanse your fingers with the hot towels that a white-clad server brings. Then study the large, colorful, and descriptive menu of Ethiopian foods, and make a selection from among a number of delicious meat and vegetable dishes, all at reasonable prices.

(Owner Carl Robson, a physician and native Clevelander, cautions that he and his brother-in-law and general manager, Mike Shiferaw, have been working on "updating" the current menu, and guests may see prices rise in the near future. The two men, along with Robson's wife, Senait, have operated the restaurant for eight years with only one prior price increase.)

Our party of four began our most recent feast with two hot appetizer selections: crunchy sambussas and a bowl of thick, heartily seasoned mashed beans, called foule. The sambussas -- four large triangles of phyllo-like pastry stuffed with a choice of tender lentils or ground beef -- were crisp, a bit oily, and flavored with green onions and bits of hot peppers. Even better was the deep-green foule, served in a medium-sized bowl topped with chopped tomatoes, green pepper, and onion, and robustly seasoned with fiery berberé powder, a blend that includes ground hot red peppers, ginger, rue, basil, cloves, cardamom, bishop's weed, and cinnamon. The foule was sided by a smaller bowl of cool, refreshing homemade yogurt and wedges of ambasha: a sweet-hot yeast bread with a coarse, biscuit-like texture that made the heat much easier to bear.

Main dishes for the entire party came to our mesob on one impressively large, injera-lined metal platter, which fit neatly into the tabletop. Each meal had been ladled onto a quadrant of the tray, directly onto the crepe-like bread; our server arranged the tray so that each diner's portion was placed more or less in front of him or her. Two smaller platters, filled with folded rounds of cool injera, were placed on side tables, for use as utensils. The goal was to gather portions of food with a bit of injera and transfer both bread and meat to the mouth, all without touching one's fingers to the main dishes or to one's lips. Needless to say, this is not something that comes easily to spoon-fed Midwesterners, making this communal dining experience one best shared with people of whom you are -- shall we say? -- terrifically fond.

Not everything on the menu is fiery hot. Shiro, an earthy russet-brown mixture of stewed beans and lentils, seasoned with ginger root, rue, thyme-flavored bishop's weed, savory, and garlic, was relatively mild. It came sided with a portion of tikil gomen: a buttery, low-wattage cabbage, carrot, and potato stew. Also fairly easy on the palate were the rosemary-scented t'ibs: little cubes of well-trimmed but slightly chewy beef, sautéed in ghee-like spiced butter along with onions and bits of green pepper. This was sided by a few spoonfuls of misr, a vegetarian dish of spicy red lentils stewed with chopped onion and berberé.

We took a chance on two steak-tartare-like raw beef dishes, kitfo and gored-gored, and ordered a half-serving of each, spiced medium-hot. The rosy red beef in both dishes was tender and fresh-tasting, and well-suited to the awaze (hot sauce), diced jalapeño peppers, and the thick glaze of spiced butter, which added a velvety touch to the already heady treats. In the kitfo, the meat was finely chopped, and the sauces and spices seemed to virtually melt into the beef, making for a notably rich and succulent dish, almost like a coarse pâté; in the gored-gored, the meat was cut into medium-sized cubes, and the interplay of flavor and texture was therefore a bit less astonishing. Both meat dishes were served with a side of iab: a moist, homemade cottage cheese with a creamy taste and a texture similar to Greek feta.

While every dish we had sampled up to this point was a winner, the most outstanding, at least in terms of complexity of flavor, was the house specialty, a traditional ceremonial stew of chicken, vegetables, and spices known as dorowat. A sophisticated blend of sweet, savory, hot, and tart flavors -- similar to a perfect Mexican mole -- the dorowat wrapped itself around our taste buds like a silk scarf. The dish began with a piece of boneless chicken breast and a whole leg, which were marinated in lemon juice, sautéed in spiced butter, and slowly simmered with onion, garlic, ginger, and berberé, until the chicken was meltingly tender and the fragrant sauce was thick, dark, and enticing. As is customary, a large, whole, peeled hardboiled egg was part of the dish and was surprisingly delightful when dredged through the savory stew. The marvelous meal came sided with a bit of iab and a pile of boiled collard greens, for contrast.

Desserts are not commonly served at the Ethiopian table, but coffee is -- often in elaborate and elegant rituals whose origins predate Christianity. In fact, the country's Kaffee region is thought to be the spot where coffee cultivation began, so it seemed natural to bring our meal to a close with a traditional coffee ceremony, which we requested when we made our reservations. We had a momentary setback when our server told us that the labor-intensive ceremony generally wasn't available on busy Saturday nights, but our crestfallen looks must have won her sympathies, because she found the time to perform one for us anyway.

At her suggestion, we moved from our basket table to a cozy corner of the restaurant outfitted with massive wooden couches and a low, glass-topped coffee table. After a few minutes, our server reappeared with a small oval pan heaped with sizzling, freshly roasted Ethiopian coffee beans and whole cloves, and set them on the table for our aromatic enjoyment. When the beans lost their sizzle, she took them away and returned with a smoldering incense burner that she sprinkled with frankincense, which soon embraced us in a smoky curtain of fragrance. While we sank deeper into our chairs, feeling sensually pampered and lulled into a state of utter contentment, she fetched the curvaceous, black clay jabena, a vessel in which the ground, roasted beans were brewing. After depositing a spoonful of sugar into each tiny espresso cup and adding the dark coffee in a thin stream, she handed us each a cup of heaven. Clearly, there was no need to add cream: The sweet, almost cordial-like liquid was so rich that it left a coating of satiny coffee oils on our tongues, yet so mellow that we drank cup after tiny cup without detecting any notes of unbalanced acidity. If not quite religious, the experience of sipping that revelatory cup of winey brew while inhaling the perfume of the frankincense, surrounded by pleasant company in a fascinatingly foreign setting, was as refreshing and relaxing as an evening of meditation.