A few minor touch-ups would help this Zin sparkle. 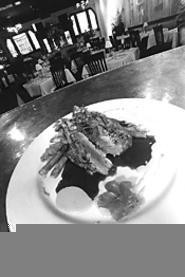 Walter Novak
Peter Katelanos has a full plate at Zin.
It's a Saturday night at Zin Restaurant & Bistro, and the tables are filling up fast. General Manager Justine Frate directs traffic with gusto, guiding guests across the dining room, handing out menus, pointing out the cloakroom. Busy servers rush by in a blur. Chatter has drowned out the background music, and chef-owner Peter Katelanos works the room, smiling, chatting, and shaking hands. The crowd (mostly silver-haired gents and their fur-coated women) continues to expand inside the tiny foyer. Hopeful patrons joke, laugh, and look at menus while they wait to be seated. But if they've popped in without reservations, they're pushing their luck: We've watched while more than a few crestfallen faces have talked to Frate, then headed back into the night.

It's clear that Zin is a popular dinner stop, especially for the "40-and-up" clientele. And why not? Just off Shaker Square, in space that was formerly Tutto a Posto, the restaurant is snug and comfortable, with a high-ceilinged, nonsmoking dining room on the main floor and a small, smoking-permitted "bistro," with live weekend entertainment, down below. Ivory linens, dark woodwork, candlelight, and handsome terra-cotta tiles provide decorative charm, and the regulars give the place a neighborly feel.

Katelanos has put together a compact menu of sophisticated-sounding Mediterranean and American fare, including seared duck breast, filet mignon, and grilled salmon, prepared in his open kitchen and brought to the table on oversized white plates. In true bistro style, entrée prices are moderate, with the majority of main-course dishes going for less than $20. Adding to the perceived value, meals begin with slices of superlative crusty bread from the Stone Oven, accompanied by kalamata olives and a saucer of chunky tomato-and-garlic tapenade; and the menu pointedly advises that main courses include a salad and a "seasonal vegetable bouquet."

Still, like a sexy label slapped onto a bottle of average wine, Zin's packaging sometimes promises more than it delivers -- especially for those with gourmet tastes. For instance, the aforementioned salad turned out to be a rudimentary toss of partially limp greens, crowned with a wedge of pale tomato and a half-slice of cucumber. The enticing-sounding "vegetable bouquet" was a good-tasting but decidedly unseasonal and pedestrian mélange of sautéed zucchini, summer squash, and red and yellow pepper strips. And we soon came to recognize those pepper strips as a kitchen staple -- an ingredient that turned up, monotonously enough, in everything from salad to duck.

Call us touchy, but we also get huffy when kitchens try to pass off a dish for something it is not, and Zin's menu wasn't immune to such overstatement. Among the starters, for instance, what was labeled "a panzanella-type" Warm Bread Salad turned out to be nothing more than torn romaine, topped with grilled red and yellow pepper strips and a blanket of giant toasted croutons -- tasty, but not remotely like traditional panzanella, where stale bread is torn, briefly dipped in water, then combined with vinegar, oil, tomato, cucumber, and seasonings.

We also felt misled by a dish titled Pasta With Vodka, which we understood from our waitress to be pasta with the usual vodka-cream sauce; what we got instead was a light, lemony broth, tossed with otherwise well-prepared fettuccine and garnished with red and yellow pepper strips, chopped tomato, and spears of grilled asparagus. It was by no means a bad dish; it just wasn't as advertised. And another surprise came with a comparatively pricey dessert of Sorbet and Berries; the nomenclature, while not technically false, seemed to give way more credit than was due to the four lonely blackberries resting in the shadow of a mound of raspberry sorbet.

Once we scraped away the hyperbole, though, much of the food was basically good. Among the starters, petal-pink lobster bisque, enhanced with crème frâiche and chunks of luscious claw meat, was rich and satiny. Five blue-cheese-stuffed ravioli in a red-wine reduction successfully aroused the appetite without bludgeoning it. And grilled asparagus, bundled in crisped prosciutto, dressed with a bit of balsamic vinaigrette, and finished with grapefruit segments and crumbs of feta, was a clever and well-managed collage of contrasting temperatures, textures, and tastes. But we weren't so fortunate with an appetizer of scallops with saffron: The five tepid scallops, in a less-than-lukewarm pool of thin yellow sauce, were a little too gritty, a little too rubbery, and a little too fishy-tasting to recommend.

One might expect that a restaurant taking its name from the fruit of the vine would have a spectacular, user-friendly wine list, with a decided emphasis on its namesake. However, this wasn't quite the case at Zin. While the wine menu listed nearly 80 different bottles, only 9 of them were zinfandels. And although it was a good one, only a single zin -- "The Monster," a big, jammy red from California's Norman Vineyard -- was available by the glass. Nor did the menu's design exactly encourage voyages of viniferous discovery. Regions and countries of origin were frequently omitted from entries, making it hard for all but the most diligent connoisseurs to make an educated choice. Even more surprising, only two of the listings included descriptive phrases or food-and-wine-matching suggestions that could encourage novice wine drinkers to try something new.

As for the main events, entrées were modestly apportioned and generally appealing -- although, again, not always as advertised. The most memorable was the herb-roasted boneless, skinless chicken breast, thickly sliced and fanned out beside a portion of buttery if not assertively cheesy macaroni and cheese. Simple yet flavorful, the homey dish was reasonably priced at $14 and was something we would return for on a regular basis. Juicy duck breast was also well prepared, although its pear-peppercorn sauce tasted more of pepper than pear, and the usual side of potatoes was replaced by a portion of run-of-the-mill oil-tossed penne pasta, the kitchen reportedly having run out of potatoes earlier in the evening. Pistachios, too, seemed to be in short supply on the night of our next visit: Four thick, double-boned lamb chops, served with a dollop of creamy mashed red-skinned potatoes and plenty of sliced peppers, tasted fine, although their promised "crust" of chopped pistachios was the merest hint of pistachio dust. (Katelanos says his customers prefer them that way; we only wish he would adjust the menu description to reflect that.)

Unless you are the owner of an especially insistent sweet tooth, the four dessert options at Zin can probably be skipped. Priced at $6 each, the mundane offerings include the sorbet, an average crème brûlée, a freshly baked Apple Tart Normande (which, when it runs out, is replaced by a slice of uninteresting commercial apple pie, crumb-topped and streaked with caramel, and gussied up with a scoop of ice cream), and, best of the lot, the Zinful Chocolate Cake: a fudgy flourless number with an understated sweetness and a touch of espresso flavoring. However, the restaurant does whip up an especially good cappuccino, with robust body and a thick, creamy head, that makes a pleasant and less expensive ending to a meal.

In the final analysis, diners could certainly do worse than stopping by Zin for a casual meal: The ambiance is friendly, entrées are moderately priced, and portions are not overwhelming. Still, it's going to take some attention to make the place sizzle: A few crumbs of cheese on the salad, maybe . . . more variety in the vegetable garnishes . . . more accurate menu descriptions . . . and, what the heck, maybe a dozen berries on the sorbet. It's really not much to ask. And it may be all it would take to make discerning diners pop their corks over Zin.