“Other places claim to do Detroit-style, but they aren’t doing it the proper way," says Joe Schlott. 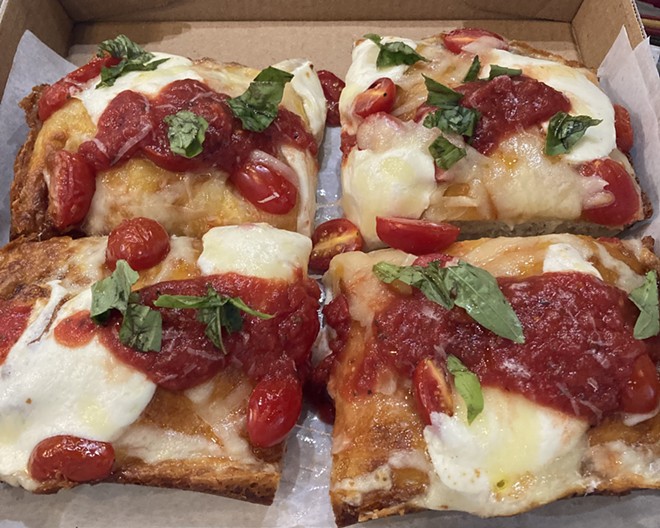 Joe Schlott
Detroit-style pizza at Gray House Pies
Last month, we shared the news that Gray House Pies owner Joe Schlott was making a return to Lakewood, the city where his pie and quiche business began. But soon after signing the first lease another piece of property caught his eye: the corner space at Madison and Brown (14201 Madison Ave.) that has been home to Chow Chow Kitchen, Smokin’ Thyme Kitchen and recently Primoz Pizza.

“I’ve had my eye on this shop for like 10 years because it’s turnkey, but people keep beating me to it,” Schlott says.

In the main space, Schlott will open Pizza Vendetta, which will focus almost entirely on Detroit-style pizza, which has been available by the slice at Gray House for a few years.

“I’ve been passionate about pizza forever and learning different styles, but I’ve been really hung up on Detroit-style for the past five years,” he explains. “So when that space became available I said this is perfect.”

Unlike those over-the-counter slices at Gray House, Pizza Vendetta will sell whole pan pizzas in two traditional sizes, 8 x 10 and 10 x 14. Customers will have a choice between a few signature pizzas or building their own from a short list of toppings. As a purist, Schlott likes to keep things simple and streamlined. But he promises that what will be coming out of the ovens will be the real deal.

“We’re going to do it the right way,” he says. “Other places claim to do Detroit-style, but they aren’t doing it the proper way.”

His technique starts with a two-day cold proof, which creates a lighter finished product. He uses high-fat brick cheese, making sure to pile it into the corners and edges. Naturally, they are baked in blue steel pans and sauced after they exit the oven to keep the tomato flavors bright and fresh.

What really sealed the deal on the property, Schlott added, was the separate walk-up space on Brown that connects to the kitchen.

“I travel around a lot checking out food places and I just adore those tiny, tiny places, so I knew I would have to put something in there,” he says.

“Something” will be U.K. Pies and Fries. Schlott has been selling savory British handpies for years at Gray House. He’ll offer traditional fillings like pork pie, steak and kidney pie and Cornish pasties, along with non-traditional fillings that will change with the seasons. Instead of the classic “pie, mash and gravy,” the shop will serve pie, fries and gravy. And since he’ll be selling fries and gravy, Schlott says customers can expect poutine. The gravy will be available in beef, chicken and vegan versions.

Look for Pizza Vendetta and U.K. Pies and Fries to open in the next month or so.