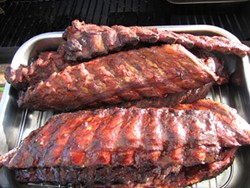 The festival was one of the largest food related festivals in Northeast Ohio and 2016 would have marked its 25th year of celebrating barbecued rib goodness in downtown Cleveland.

The four-day celebration was held during Memorial Day weekend at Jacobs Pavilion and the Nautica Entertainment Complex. It was hosted by Live Nation, and the company says this year they will be focusing on other events and festivals in the works. One of the company's prime reasons for canceling was the dozens of other rib cook-off events every summer in the city, which translates to less revenue. (Make sure you don't miss Scene's Pig & Whiskey festival in Willoughby this year — hint, hint.) There was a lot of competition and some folks have already noted on various comment threads that the Great American Rib Cook-Off had its problems — crowds and prices being two of the biggest factors.