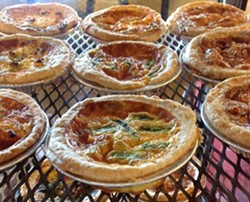 Joe Schlott launched Gray House Pies as a second career by peddling pies from his front porch to hungry parishioners as they left a nearby church and passed by his old gray farmhouse. After five years of farmers market appearances and improvised commercial kitchens, Schlott opened the original Gray House Pies in Fairview Park in 2008. He followed that with a second shop in Westlake (26075 Detroit Rd.), which he opened six years ago.

Next up for Schlott is a new shop clear across town on Larchmere, not far from the North Union Farmer’s Market at Shaker Square, where he’s been a regular fixture every Saturday for more than a decade.

“We’ve been doing the Shaker market for 13 years, so we have little bit of an East Side following already,” he says.

The new spot (12204 Larchmere Blvd.), most recently the short-lived Urbean Joe's Café, will be a full bakery and retail storefront. Like at his other shops, the new one will sell fresh-baked fruit pies, cream pies and meat-based pot pies. Schlott uses free-range eggs, whole butter, and organic whole milk, avoiding canned fruit, hydrogenated fats and preservatives.

A new line of products, however, has been stealing much of Schlott’s time and affection.


"I’ve been playing around with pizza for 20 years and I’ve settled on Detroit-style because I just love it.”

“We started doing real Detroit-style pizza by the slice,” he says. “That’s really where my heart is these days. I just love making pizza. I’ve been playing around with it for 20 years and I’ve settled on Detroit-style because I just love it.”

Schlott says he’s doing it by the book, which means using real blue-steel square pans, a three-day fermentation process, and fresh uncooked sauce on top of the cheese.

“It’s lighter than a focaccia,” he says. “They’re light as a marshmallow.”

Valon Jusufi will be running the shop, which will open the first week of April.

No changes at North Union, where shoppers will still hear the ever-present jingle: “Small pies for walking around; large pies for sitting down.”