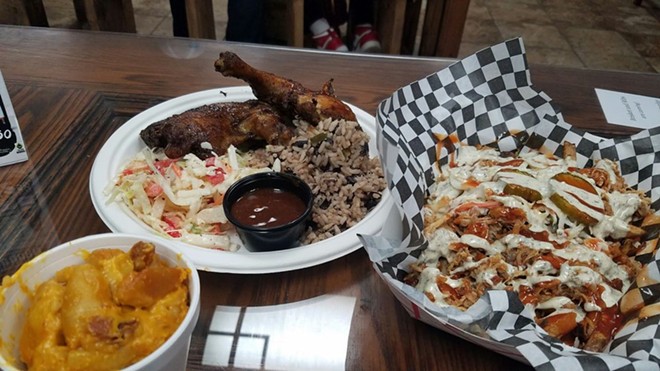 Hatfield's Goode Grub Express opened its doors in the old Cleveland Pickle spot last week and is now serving up southern-infused sandwiches and sides from 11 a.m. to 5 p.m. Monday through Friday.

Check out the menu here.

(Original story 2/19/18): It didn't take long for a new tenant to scoop up the spot occupied by Cleveland Pickle until last month.

"The space doesn't have a hood, so I won't be able to do burgers," Hatfield says, "but I'm formulating an insanely good sloppy joe, and we're still going to do our pulled pork, our hillbilly philly and we'll do a bunch of southern twists on different sandwiches."

Hatfield's Express will also feature a roster of deli favorites — chicken salad, tuna salad, egg salad, potato salad — all spiced up with a southern twist, of course. Hatfield is still figuring out the exact menu and hours but says the shop will probably be open from 11 a.m. to 6 p.m.

"We're already established with our food truck which is at Walnut Wednesdays, so we want to take what all those people enjoy at our truck and have them come over any day of the week," he says. "We're really looking forward to it and we want to get open as soon as possible."

There's also news on the food truck front: Hatfield's is launching a second truck, Hatfield's Goode Grub Sweet Tooth. Malts, milkshakes, cookies, pies and cobblers will be served from a vintage 1976 ice cream truck. Look for that to start rolling this spring.