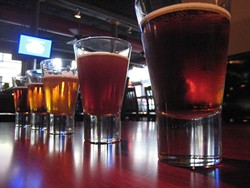 Courtesy edkohler via flickr
Listen up Clevelanders: You have through the end of the month to make sure Cleveland makes it to number one in USA Today's vote for Best Beer Scene in the US. The outlet is running a handful of beer-related votes this month — best beer bar, etc. — and the lovely Forest City is in contention for the top brew location in the nation.

Voting is open until Monday, February 29. So far Cleveland is in sixth place with Asheville, N.C., Tampa, Chicago, Fort Collins, Colo. and Grand Rapids, Mich. holding the next five spots. Anyone can vote, and you're allowed one vote per day.

The Readers' Choice vote is held each year, with only 20 cities ultimately making the cut.

Cleveland isn't new to being number one. The city's beer scene was recognized by the Huffington Post as best in the country last year.

To vote for Cleveland your Favorite Beer Scene in the US, click here.

To take a look at he leaderboard, click here.