Anthony Franchino, PressureLife
Like the pot sellers of Austin, Natalie Sideserf owes much of her success to Willie Nelson. Well, an edible version of him anyway. Soon after relocating from Cleveland to that Texas town, the artist-turned-baker had the crazy idea to craft a hyper-realistic likeness of the country legend out of delicious cake.

“I had this goal set in my mind to learn how to use these materials as if they were traditional art materials so I could use my artistic side to do some really extreme things, except that it's edible and it's cake,” explains Sideserf, owner of Sideserf Cake Studio. 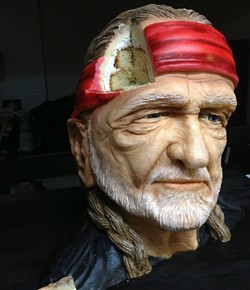 While countless pastry chefs have followed in her footsteps, Sideserf was a pioneer in the field of lifelike, often over-the-top, edible confections.

“When I started I was just experimenting,” she says. “In sculpture class you make these busts out of clay and I thought, why can't I make that out of cake? I started doing research online to try and find a cake bust and I could not find any. I said, I'm just going to dive in and try this.”

That tasty Willie Nelson cake landed on the front page of Reddit and all of the sudden, everybody wanted a taste of Sideserf and her cakes.

“It went viral all over the world because nobody had seen anything like that. Now, they're everywhere. But nobody had attempted that level of realism back then.” 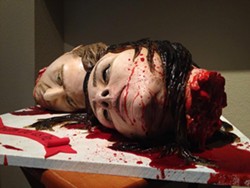 When Sideserf married her husband, it was only natural that she would bake the wedding cake. What wasn’t expected was the form it would take: her and her betrothed's severed heads in a bloody scene straight out of the Walking Dead.

“My husband is a huge horror fan so I had the idea in my head,” she says. “I was describing the idea to my family and they were all like, yeah, I don’t get it.”

When you’re staring down a work of art like one of Sideserf’s artistic creations, it must be unbearable to demolish it with a knife, no?

“It’s always so much harder for everyone else, but I love it. It’s my favorite part. Like the severed head for example; once you cut into it you can see that it’s just cake, and it smells like cake, and it tastes like cake and it’s way less intimidating.”

And there are no brains oozing out.

“I can make that happen too.”

“Anybody who is interested at all in how it works can come in and try it out,” she says. “It’s a nice introduction to using edible materials to make a cake topper.”

Unlike clay, which is patient and forgiving, using edible materials as art materials presents a special set of challenges, Sideserf explains.

“You’re using cake, you have to build an armature to hold it up, and chocolate likes to melt, and everything is really sticky and temperature-sensitive,” she says. “It’s not the easiest thing to work with.”