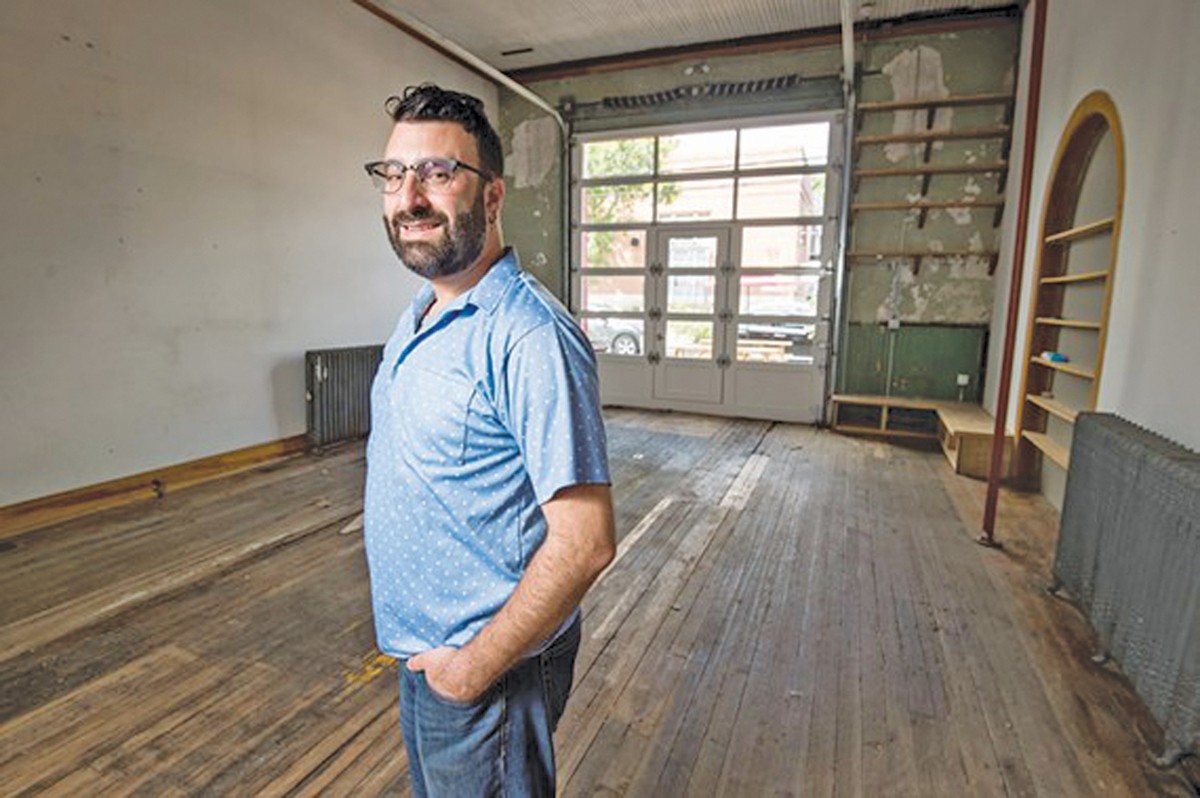 It's the last Sunday in June, and dull, wooly heat weighs down on an unpaved parking lot outside of Nelson-Kennedy Ledges State Park. In a back corner of the lot, Jeremy Umansky holds court between an irrigation ditch and the rusted wheel well of a silver Dodge Durango. He's teaching two dozen of us — hip kids, big boys in Browns jerseys, young professionals, hobbyists, boomers, a vegan cheesemaker — how to safely and confidently forage for some of the approximately 300 edible plants and 100 fungi that grow wild in Northeast Ohio.

"If you find a plant that has thorns, and produces fruit that looks like blackberries or raspberries, you can eat it," advises Umansky, after spotting a familiar tangle of thorns near the ground. He was drawn to this patch of brush by the fuzzy, fuschia cones of staghorn sumac — the North American relative of the bush whose dried berries are ground into the tart, peppery seasoning widely used across Middle Eastern cuisines — visible from across the lot. Within 15 minutes, Umansky deciphered blackberries, wild roses, wild grapes, cattails and thistles from the brush surrounding the sumac.

We were surrounded by edible plants, all of which Umansky regularly uses in the dishes he serves at his James Beard Award-nominated Ohio City restaurant, Larder Delicatessen and Bakery. At Larder, Umansky and his partners and staff serve housemade fried chicken sandwiches, ferments, pickles, salads and gigantic pastries to diners throughout the week — many of which are made with ingredients harvested from Northeast Ohio's collective backyard.

"Personally, I work with about 150 to 175 different species of mushrooms," says Umansky. "Plants, we probably use over 300 different species. When we use the ingredients [at Larder], they're just fully integrated into our cooking. They aren't called out as something special or unique because we want everybody to be able to relate to it."

Umansky holds a Wild-foraged Mushroom Certification from the Michigan Department of Agriculture and Rural Development, one of only a handful of qualifications professional foragers can receive in the United States (Ohio does not regulate wild foraged foods). Growing up in Solon, Umansky began foraging with his mother, harvesting wild blackberries from a dirt-bike pathway in a wooded lot near his home. He began foraging professionally in New York, working as a land manager for a farm that partnered with Cornell University, New York's state agricultural school.

"We worked on an added value program of developing wild foods into a product listing," says Umansky. "Teaching farmers how to recognize that instead of spraying your fields, you can harvest these things and sell them for a primo at the New York City green markets."

After returning to Cleveland in 2014, Umansky began teaching foraging classes to make money while he and his partners were opening Larder. Today, he runs these two-hour classes twice monthly from April through early November as part of Larder's food education program, which includes classes on topics including fermentation, charcuterie and canning.

"We're a very nature-phobic society," says Umansky. "We're mycophobic. We're afraid of fungi. People are afraid to even touch them — they think they're going to die. We're afraid of every berry, thanks to great sensationalized outdoor adventures like Into the Wild. Every plant you touch is going to give you a rash because of poison ivy. Essentially, we're afraid of the outdoors. And we shouldn't be, because we're part of the ecosystem. Being able to dispel that is a huge goal."

Umansky's class serves as an introduction to foraging in and around Cleveland. Through the afternoon, we learned how to identify a handful of Northeast Ohio's most common edible — and poisonous — plants and mushrooms, as well as ground rules for how to safely and responsibly forage.

"Outside of the black and white of 'this is poisonous and will kill you,' and this is delicious,' there's all these other ramifications of improperly foraging and being a bad steward," explains Umansky. "You can be trespassing on someone's lawn. There's places you legally can't forage — like in the Metroparks — and you'll get a ticket. There's also issues of places that are contaminated. It may look like a beautiful, wild space, but there can be cadmium or lead in the soil."

Once we moved from the parking lot into the forested sandstone contours of the Ledges, my personal goal was to find and harvest a patch of chanterelles, the squat, golden mushroom which grows near birch trees and is prized by chefs for its peppery flavor. As we picked through the underbrush, aspiring foragers would bring different plants and mushrooms to Umansky's attention, each of which he identified by its Latin name and described in detail. Almost every mushroom we were able to dredge up from the forest floor was, unfortunately, not palatable, meaning it would either dissolve into nothingness when cooked, taste awful or, if ingested, send you running to the bathroom. One forager was able to find a hatful of tiny chanterelles, but the enormous haul I had been hoping for did not arrive.

I returned to the Ledges with a backpack and pocketknife on a heavy July morning, mushrooms on the brain. Two weekends later, patches of apricot lumps had spread through the forest floor. I checked the underside of a cap, seeing gills that split off divergently in little rivulets rushing toward the sky. These mushrooms were clearly, unmistakably, chanterelles. And they were everywhere.

I began harvesting, slicing the larger mushrooms in each patch off at the base of the stem. After a half hour's worth of mushrooming, I had over a pound and a half of chanterelles, at least forty bucks' worth at any grocery store. That evening, I would roast my chanterelles with garlic and olive oil and toss them with parsley, Parmesan, butter, black pepper and tagliatelle.

"Most of the rest of the world, foraging is a normalized activity that's just part of how you put food on the table," says Umansky. "In Eastern Europe, most of Asia, from Russia down to Thailand, large parts of Central and South America, that is just as much a regular thing for putting food on the table as it is for us to go to the supermarket. To find something here that you can get with your own hands, that you can enjoy eating with your family ... it's captivating."

After 17 Years at Former Location, Crave Will Open its New Downtown Akron Restaurant Next Week

Chef Michael Grieve Takes Over the Grocery in Ohio City, With Ambitious Plans to Follow