La Fiesta to Relocate from Richmond Heights to Beachwood, Preserving a Cleveland Trailblazer 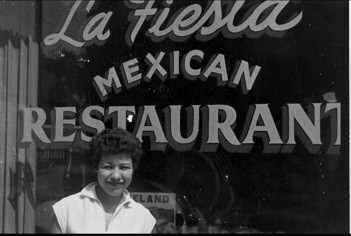 Courtesy Brian Adkins
The year was 1952 when Antonia Valle finally realized her dream of opening a restaurant specializing in the foods from her home state of Michoacán in Mexico. When La Fiesta began serving enchiladas, tostadas, tamales and moles at its modest Ohio City restaurant, located at the corner of W. 25th Street and Walton Avenue, it offered many Clevelanders their very first taste of Mexican food.

In the mid-1970s, that pioneering operation, which many agree was the region’s first Mexican restaurant, relocated to Richmond Heights (5115 Wilson Mills Rd., 440-442-1445), where it has been ever since. The appealing, accessible, family-run Mexican restaurant kept generations of Eastsiders well fed with some of the most comforting foods around, even if they were unfamiliar to many in the early days.

That 67-year legacy was just weeks from closing its doors, says fourth-generation partner Brian Adkins, whose great-grandmother first decided to peddle the foods of her homeland here in the States. A perfect storm of property issues, family retirements and demographic trends had all but snuffed out the legacy of Cleveland’s oldest Mexican restaurant.

“We were planning on closing after Cinco de Mayo, but in the last few months, one of our customers got wind of it and we are in the process of moving,” Adkins reports.

The new home, which is just now coming together, will be located at Richmond Plaza in Beachwood, the small commercial strip across the way from Moxie and Red restaurants. La Fiesta’s neighbor will be Hough Bakery, which also recently announced plans to put down roots there.

Plans call for a summer opening.

When it does open, La Fiesta will be a touch trimmer, shedding about a 1,000 square feet and some seating. That suits the family just fine, says Adkins, adding that the restaurant outgrew the business over the years. The menu will be streamlined as well, with a sharper focus placed on the foods that people really love. Improvements, too, will be part of the blueprint, with plans to once again craft tortillas by hand in house.

A quick-serve taqueria will be incorporated into the design of the restaurant, notes Adkins, as will a bar and patio.

Given the recent developments, the goal now is to keep the Richmond Heights restaurant open until the new one nears completion.