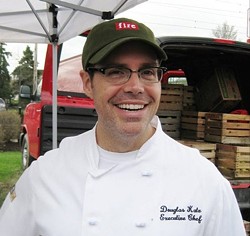 CleveScene archives
Doug Katz, chef-owner of Fire Food and Drink and Katz Club Diner, will try his hand at chef merchandising for the first time this fall with Fire Spice Co.

Katz told Crain's Cleveland he came up with the idea for Fire Spice Co. while making Indian curry, which is normally a lot of work. When he added his spices "all of that anxiety and stress of cooking went away." He also plans to launch a spice-of-the-month club aimed at the everyday cook. The Council of Smaller Enterprises in Cleveland provided funding for this venture.

Katz received a $2,500 award after finishing as a finalist in the annual COSE Business Pitch Competition in May of this year. This money was used for to fund the startup cost for the spice company. Expect to see Fire Spice Co.'s custom-blended spice packets in local cooking stores, farmer’s markets and at Katz’s restaurants this fall. By day, Tyler Singleton studies journalism at Kent State University. By night, he pledges to serve and protect the public as a Geek Squad Agent. Tyler has been “waiting for next year” his entire life and even this love for Cleveland sports led to his name: Tyler as in Ty Detmer, another mediocre Browns quarterback...
Read More about Tyler Singleton
Scroll to read more Food News articles