It's really not an Irish pub, but it certainly feels like one. 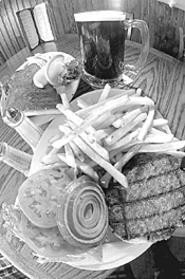 Walter Novak
When it comes to Beachcliff offerings, burgers -- and Guinness -- leap to the fore.
Saturday night around eight in Rocky River, and we're perched on bar stools, smiling down at the shamrocks drawn in the creamy white heads of our Guinnesses and listening to Jerry Lee Lewis on the jukebox. "Don't fuck with the bartender," cautions a buddy, leaning in close to my ear. Like I can't see that for myself: Not only is mix-master Jimmy Jerman the reigning champ of the Guinness two-part pour, but the guy has arms the size of Yugos, and each sculpted mass of muscle bursts out of a black T-shirt tighter than an Irishman on St. Paddy's Day.

Speaking of which, we didn't wander into the Beachcliff Tavern looking for a place to celebrate the good saint's holy day. All we knew was that the joint is owned by industry vets Tommy and Vickie Valore, and that the house specialty is barbecue -- neither of which particularly suggested visions of the Auld Sod. Then again, we've been on enough bar stools to know that an owner named "Mick" and a menu of colcannon and boxty don't guarantee an authentic Irish experience either. So, though it's not intentionally Irish, when the Valores' handsome tavern turned out to be more like the essential Dublin pub than Fado or Claddagh will ever manage . . . well, let's just say we weren't entirely astonished.

After all, the sine qua non of an Irish pub is not necessarily its menu, its beer list, or even the ancestral roots of its owner. The real mark is its warm, inviting ambiance, which the Beachcliff has by the bushelful, from its stone floor to its soaring ceiling and from its mirrored Victorian backbar to its broad-beamed schoolhouse chairs.

Besides the requisite Guinness-emblazoned mirrors and the neon Miller sign -- and, okay, the Elvis lamp high on a corner shelf -- there is little about the place that is kitschy or self-consciously cute. Instead, its stylistic persona signals a humble authenticity, the comfort of which slowly washes over the grab-bag clientele like the dim amber light from the intricate leaded-glass wall lamps.

For our money, the best seats in the house are at the end of the long oak bar, and not just because that lets us keep an eye on Jerman (who is a really nice guy, and who didn't make us write that). There's just something ineffably companionable about sitting elbow-to-elbow with other like-minded patrons, checking out our neighbors' meals and pondering what to drink next. Peroni or Hoegaarden? Bass or Bud? The options run deep and wide.

Also, bellying up to the bar reminds us to stick to the simple pub grub, which seems to be what the kitchen, under the direction of chef Tom Doerner, does best. You might want to write that down; the menu is a big one, and its rambling passage through the usual bar noshes and onward to soups, salads, sandwiches, seafood, steak, and pasta can be tough to navigate.

Among the not-so-great put-in points, for instance, we count the Beachcliff's specialty, hickory-smoked barbecue. We gave it two chances -- in a half-slab of spice-rubbed St. Louis-style ribs and a slow-roasted pork sandwich -- but neither made our boat float. Sure, both the ribs and the pork had fine, dusky aromas from hours in the wood smoker, and the accompanying homemade barbecue sauce (not served on the meat, but on the side) was thick and mild, although effusively tangy. Still, the ribs were dry and bony, and the stringy hunks of slow-roasted pork were so unyielding that we could barely penetrate the sandwich with a knife. Slathering on the sauce was a palliative measure at best and by no means a cure.

A combination of overcooking and underseasoning sank the bland, slightly dry chicken-and-shrimp combo dinner, too; some of that zesty barbecue sauce would have brightened up the flavors considerably, but none was offered. Along the same lines, a small broiled filet of frozen cod -- remarkable only for achieving a state both dry and mushy -- might have been helped by the promised lemon butter; but if it was there, we certainly couldn't taste it.

In fact, after two visits, we developed a strong suspicion that the menu's descriptions are merely broad suggestions and what is actually served depends on staffers' whims. We never saw the rolls and butter that were supposed to accompany our entrées. A poorly trimmed strip steak arrived without the promised sautéed onions; chicken wings were accompanied by the celery, but not by the expected blue cheese; and while homemade chili came with the reported toppings of shredded cheddar and chopped onion, the sour cream was MIA.

And about that chili . . . thick, mild, and filled with kidney beans and ground beef in a sweetish tomato-based sauce, it was a good-tasting example of typical Midwestern red and one that we would certainly order again. So why the menu called it "Texas-style" (which implies a blend of cubed beef, lots of heat, no beans, and usually no tomatoes) completely escapes us; unless the cook came from Dallas, this bowl of gentle flavors was no more Texan than the Terminal Tower.

(While we're griping, we should also mention that smoking is permitted throughout the space, and after sitting in the middle of the dining room on a crowded Thursday night, we had to hurry home and wash the lingering scent of cigarette smoke out of our hair.)

But despite some rough spots, we did find other reasons to reclaim our favorite barstool. Take the crisp-edged kettle chips, for instance, hot from the fryer and still slightly chewy in the center. Heavily seasoned with a salt-and-pepper blend and served with a vat of dense, creamy French-onion dip, the huge portion was such an irresistible complement to a couple of brews that we finally had to hide the basket beneath a pile of paper napkins, lest we gobble down the entire batch.

Follow the chips with a thick, beefy, half-pound bacon-and-bleu burger, and you've got yourself a tasty two-fisted meal. Or try the deep-fried chicken wings -- plump, hot, and slathered with barbecue sauce -- for a deliciously messy and satisfying nosh. And if there's still an empty spot in the belly that needs filling, there's nothing wrong with sides of crunchy-sweet homemade coleslaw or smoky molasses-and-bacon-piqued baked beans.

Remember, though, that where the beer, burgers, and wings roam freely, homemade sweet endings are rarely to be seen. And so it is at the Beachcliff Tavern, where dessert selections are limited to the usual retinue of tall tortes and cheesecakes, brought in from an outside bakery. True, a generous slab of one night's chocolate mousse cake hit all the right flavor notes. Still, if something sweet is what you're craving, let us point out that both a Rosati's Frozen Custard shop and a Mitchell Brothers' Ice Cream emporium are within half a mile of the tavern. 'Nuff said.

The tavern's other amenities include a lunch menu, kids' menu, and frequent live entertainment, and even if the Beachcliff isn't really Irish, on March 17 the beer and music will be flowing all day long. That should come as no surprise, of course: On St. Patrick's Day, everybody is Irish, and that includes the Valores and their tavern.