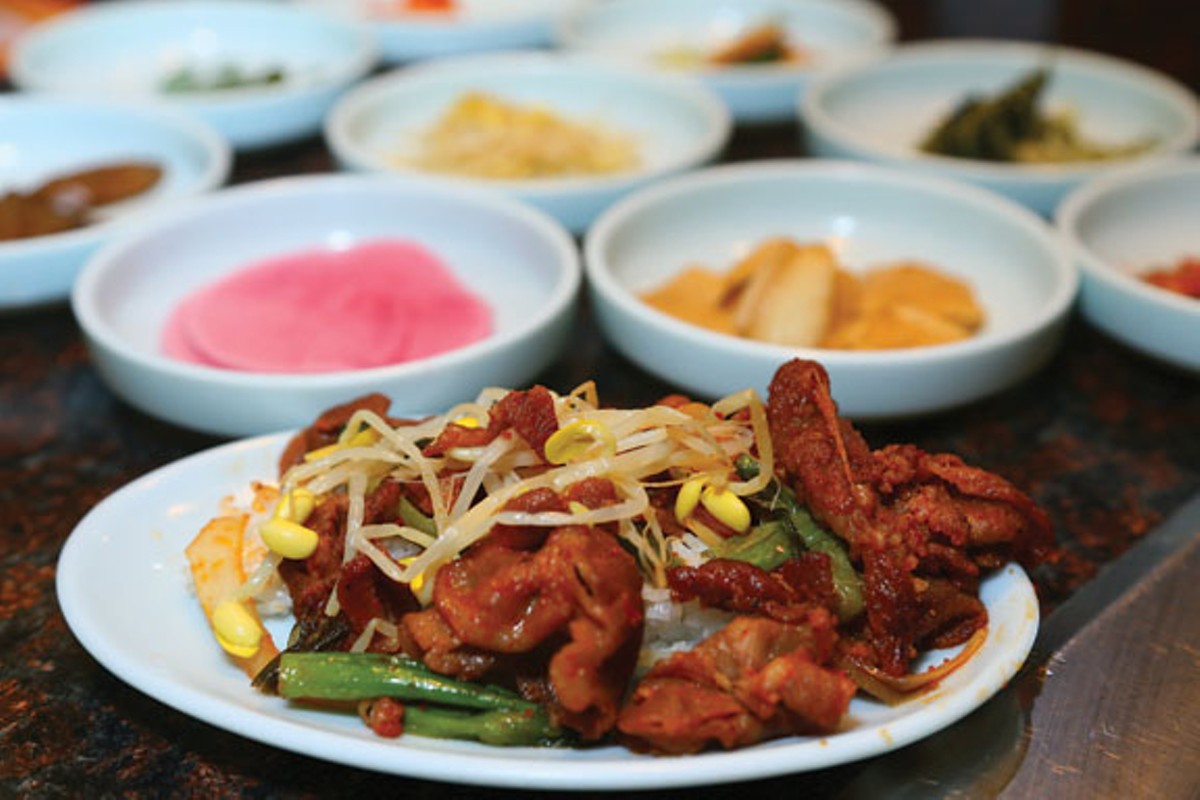 When Miega Korean Restaurant opened on the second floor of Asian Town Center about five years back, they had plans to install the sort of built-in grills that make Korean-style barbecue so much fun. Those plans were scrapped in favor of the more affordable tabletop hot plates, which are fine in a pinch, but don't do nearly as good a job of browning — as opposed to steaming — the meat.

When we learned that the restaurant recently had installed built-in infrared-powered grills, I scheduled a return visit. After being seated at one of the five or six grill-equipped tables, we settled on orders of the galbi ($26.95) and the pork bulgogi ($19.95). Our server informed us at that time that they were out of lettuce wraps, an indispensable component of Korean BBQ. When asked why an employee didn't simply go downstairs to the same well-stocked Asian grocery that we just departed, she responded with, "We don't buy from them."

Our waitress brought over a nice selection of banchan, an array of small dishes filled with delectable items like spicy kimchi, bean sprouts in sesame oil and pickled radishes. She did not, however, offer cups of bori cha, the nutty barley tea that is automatically served at most Korean eateries. She also didn't turn on the grills in time for them to properly pre-heat, which meant that we couldn't begin cooking for nearly 10 minutes after she dropped off the raw food.

Korean BBQ always requires more than a bit of management on the part of the diner, and Miega is no exception. Items like galbi, meaty bone-in beef short ribs marinated in soy, garlic and sugar, take longer to cook than the bulgogi, thin-sliced pork in a zesty red chile pepper paste. Also, the grills have two power settings, and we frequently needed to switch from high to low and back to keep things running smoothly. Like most nights at the Korean BBQ, expect to leave smelling like a fry cook.

Despite the shortcomings, the food turned out excellent, with large portions of flavorful meat that we enjoyed with steamed rice. Miega has no liquor license, so if you like to pair your Korean BBQ with soju as is customary, you'll need to bring it yourself.

Over the past few years, the longtime owners of Seoul Hot Pot closed, reopened and then closed their shop again after nearly 30 years in business. Last December the restaurant changed hands, with Soon Moh taking over and changing the name to Hansol.

Despite the name and ownership change, this Asia Town eatery is still tops when it comes to Korean barbecue thanks to roomy tables with built-in gas grills and vent hoods that suck up most of the fumes. But the rest of the menu seems to have gotten a bit of an upgrade since the transition. Moh, who relocated from New Jersey, says that he brought with him a "New York-style" of Korean cooking that amps up the heat and dials back the sweetness of many classic dishes.

"It's almost the same," he explains. "It's the same food, but every cook is different."

For diners new to Korean cuisine, he recommends the dolsot bibimbap ($13.95), rice, beef, veggies and a fried egg layered into a hot earthenware bowl. After adding some gochujang-based sauce, the dish is stirred and enjoyed, especially the crisp rice stuck to the bottom of the bowl.

Hansol excels at soups and stews, which arrive at the table bubbling away in a hot cauldron. The yukgaejang ($12.95) looks formidable owing to its fire-engine red hue from a heaping portion of red pepper flakes. It's indeed spicy, but it also is incredibly complex and delicious, with bits of beef, scallions and glass noodles. Another great option is the kimchi soup ($10.95), a tart, pungent brew loaded with cubes of silky tofu, tasty bits of pork, and spicy pickled cabbage. Both are served with steamed rice, which can be added to the broth or vice versa.

Unless you're opting for the full-on meat-based barbecue adventure, you should add a few starters to your meal. Almost every table orders the pajun ($8.95), a thin, crisp and eggy pancake studded with bits of shrimp and scallions and served with a sweet soy-based sauce for dipping. Kimbap ($5.95) is a Korean-style sushi roll filled with egg, pickled veggies, seasoned beef and sesame-scented rice. Mandu ($6.95) are delicious meat and vegetable filled dumplings that are similar to potstickers.

If you haven't visited Seoul Hot Pot in years, you'll be pleasantly surprised by the recently updated interior. The previous owners swapped out the musty carpet for hardwood floors and put in place a handful of other improvements that have made the experience a hundred times more comfortable.