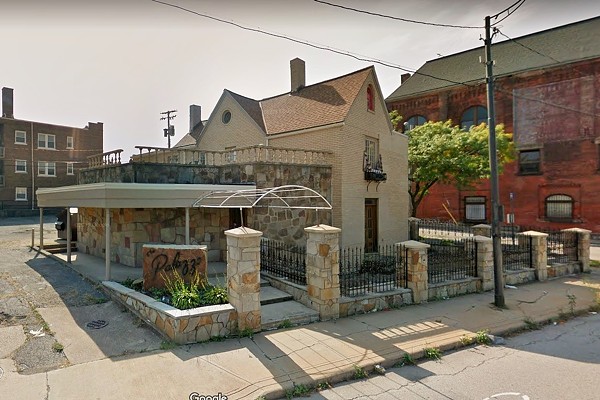 Google Maps
It’s hard to find a restaurant with a more compelling backstory than Palazzo. The building, located at 10031 Detroit Ave., began life across the street as the Spaghetti Grill. The business was purchased in 1947 by Palmina DiFilippo and her daughter Theresa, who opened Palmina’s. At some point, the building was relocated across the street to make room for an RTA station. In 1993, Carla and Gilda Carnecelli, grandchildren of the original owner, reworked the building into the Italian restaurant Palazzo. That restaurant cruised along until about 2002, when it closed. The fieldstone and brick “palace” has been vacant ever since.

That is, until about eight months ago when Rafael Zaloshnja purchased it. The Albanian-born chef has been working to renovate the space into an upscale Italian eatery. His work experience includes stints at Heck’s Café, Beachcliff Tavern where he was co-owner, and Luca, where he was a cook. He said that he has always admired the building.

“I’m an Eastern European and I’ve always loved that construction, so one day I decided that I’m going to take a chance,” he says.

He is in the process of updating everything regarding the property except for the name, the bar and the original pizza oven, a 70-year-old Italian beast that still works like a dream.

“I’m going to keep the old bar exactly the way I found it, scratches and all,” he adds. “People have a lot of memories about this place.”

When it opens in about a month, the restaurant will offer made-from-scratch pizzas, pastas and desserts, along with hearty main courses built around seafood and chops.

The somewhat isolated location between Detroit Shoreway and Lakewood does not concern Zaloshnja.

“I’m third-generation and in my experience, if you do good food and good service, people, no matter where you are, will come support you,” he says. “They’re going to give you a chance, at least, and if you’re smart enough, you can keep them.”