Nora is in the Heart of Little Italy, But Also a World Away 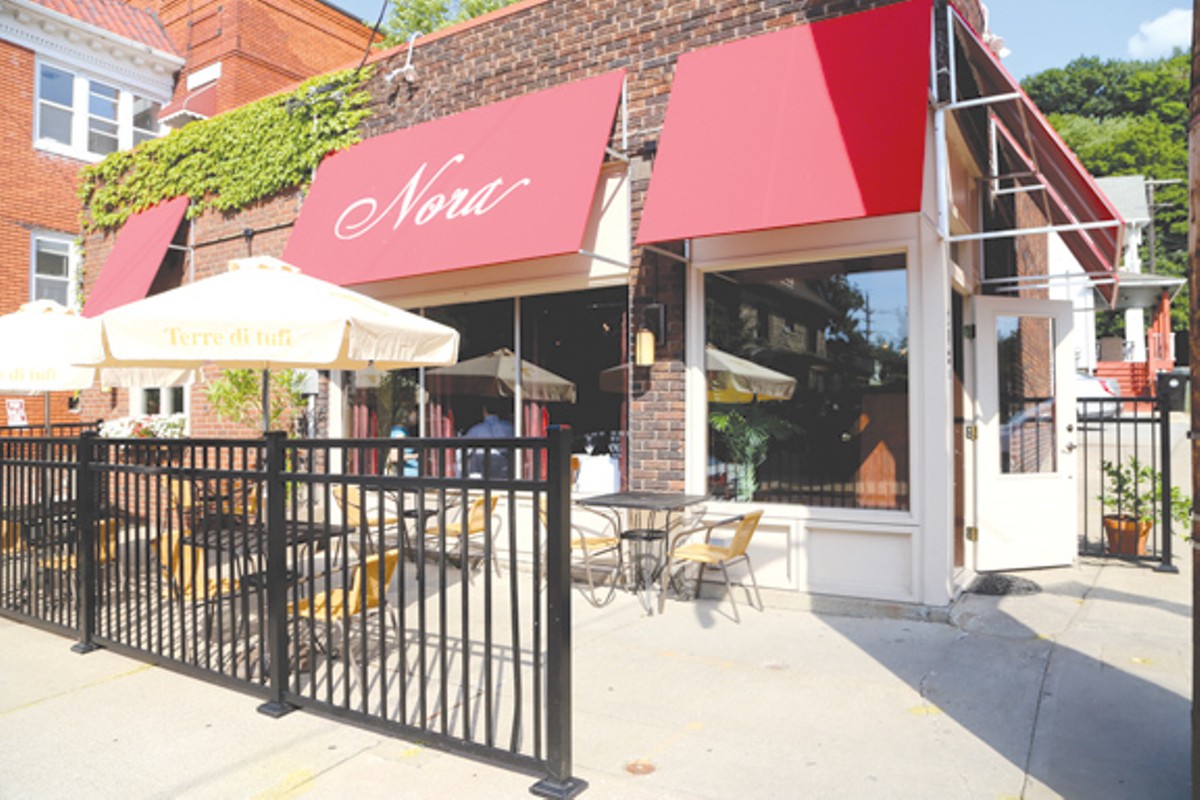 You don't expect to find a pasta dish that includes potatoes. For good reason too, because who needs to add more starch to a plate of starch? But then the dish lands on the table and you see that those potatoes are wispy little matchsticks, flash fried to a sunny golden brown and arranged like a crown of thorns around the fettucine noodles. More than a garnish, the crispy spuds supply some much-appreciated texture in an otherwise texture-less dish.

But that's just one delicious facet of the pasta carbonara that chef Eddie Zalar prepares at Nora, his one-year-old bistro in Little Italy. That crunch of the potato is set against the gentle resistance of housemade noodles. Then there's the requisite creaminess, provided by the oozing yolk of a perfectly poached egg. A grating of cured egg yolk offers a salty kick of umami.

In a neighborhood that runs on red sauce, it's shocking to find an Italian restaurant in Little Italy that lacks a single marinara. Instead, Zalar applies his classic French training to characteristically Italian ingredients to come up with dishes that are in synch with the season, if not the surrounding restaurants.

"Yeah, we're trying to avoid red sauce," the chef says. "If you want pasta with red sauce, there are other places in the neighborhood that are doing that. We're trying to do something different."

Indeed. The last time my wife and I dined at that historic corner bistro, long home to Salvatore's Ristorante, it was the dead of winter and the chef of a previous business thought it was a good idea to serve a tomato and mozzarella salad. It wasn't, and we never returned. Perhaps that's why it took me 10 months to work up the courage to return to that squat brick building on Murray Hill. I'm glad I did — and so should you.

There's a certain freedom that comes with small restaurants and short menus, a sensation that Zalar came to know and love working at places like Smith & Mills, a trendy 30-seat, 400-square-foot boîte in New York. The opposite of turning a large freighter, running a diminutive bistro allows the chef to be nimble and daring without fear that he'll be stuck with a clunker. We didn't find many clunkers on his concise roster of appetizers, pastas and entrees, which tops out at around 15 items.

Meals begin with warm, crusty bread served with salted whipped butter. That same bread gets toasted, slathered with roasted garlic and paired with an orb of burrata ($10), ripe tomatoes and basil pearls that pop when you slice into the fresh, milky cheese. Unlike that ill-fated wintertime salad a few years back, this clever caprese succeeds on every level.

Zalar, who left Cleveland when he was 18 to embark on his culinary career, has a knack for rearranging the components of classic dishes not just for fun but for the benefit of the diner. In place of the customary pool of marinara (nope, not in this house), the chef rests his golden brown arancini ($8) in a bed of airy whipped ricotta. The fennel that so often finds its way into red sauce shows up instead as a dusting on the rice balls. And when you break into them, yellow saffron risotto glimmers like sunshine.

Damn near every chicken Marsala ($28) I've ever eaten starts with a sauteed chicken cutlet and ends with a sweet, gloopy wine sauce. Zalar, naturally, goes about things differently. For starters, he treats the white and dark meat differently, with an expertly roasted crisp-skinned airline breast joining a juicy roulade of boneless thigh meat. The meat, along with earthy mushrooms and halved Peruvian blue potatoes, rests in a silky, elegant blush sauce with a hint of wine.

When it comes to a filling for ravioli — here called agnolotti — the chef shuns globs of meat and cheese in favor of a neon-green sweet pea mixture. In this case, the pasta pillows are presented on a bed of whipped goat cheese and garnished with tomato, cheese shavings and pickled kohlrabi slices, creating a beautiful, colorful still life.

The closest a diner will get to pasta with red sauce at Nora is the pappardelle with lamb ragu and minty ricotta. There's also a Calabrian-style pasta with clams, octopus and chiles and a ravioli stuffed with duck confit, but expect the menu to change. All pastas can be ordered in half or whole portions ($12-$16/$19-$26), great for diners who enjoy coursing out their Italian feast.

Nora's non-conventional Italian menu will not please every diner who visits Little Italy, but at 40 seats, it doesn't have to. And for those who will not be denied their chicken Parmesan, there is no shortage of suitable options within walking distance.