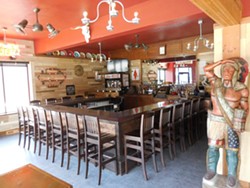 Last month we offered the first public glimpse of Woodstock BBQ (13362 Madison Ave., 216-226-8828), a Lakewood smoked-meat restaurant a couple years in the making. After such a lengthy and extensive build-out process, owner Robert Togliatti said that he wouldn't open the doors until he had every detail ironed out.

Apparently, that occurred this past weekend. After a few days of a "soft opening" period, Woodstock BBQ opened to the public this Monday.

Sides range from corn bread and baked beans to broccoli salad and mac and cheese.

Woodstock opens today at 3 p.m. in case you're wondering.