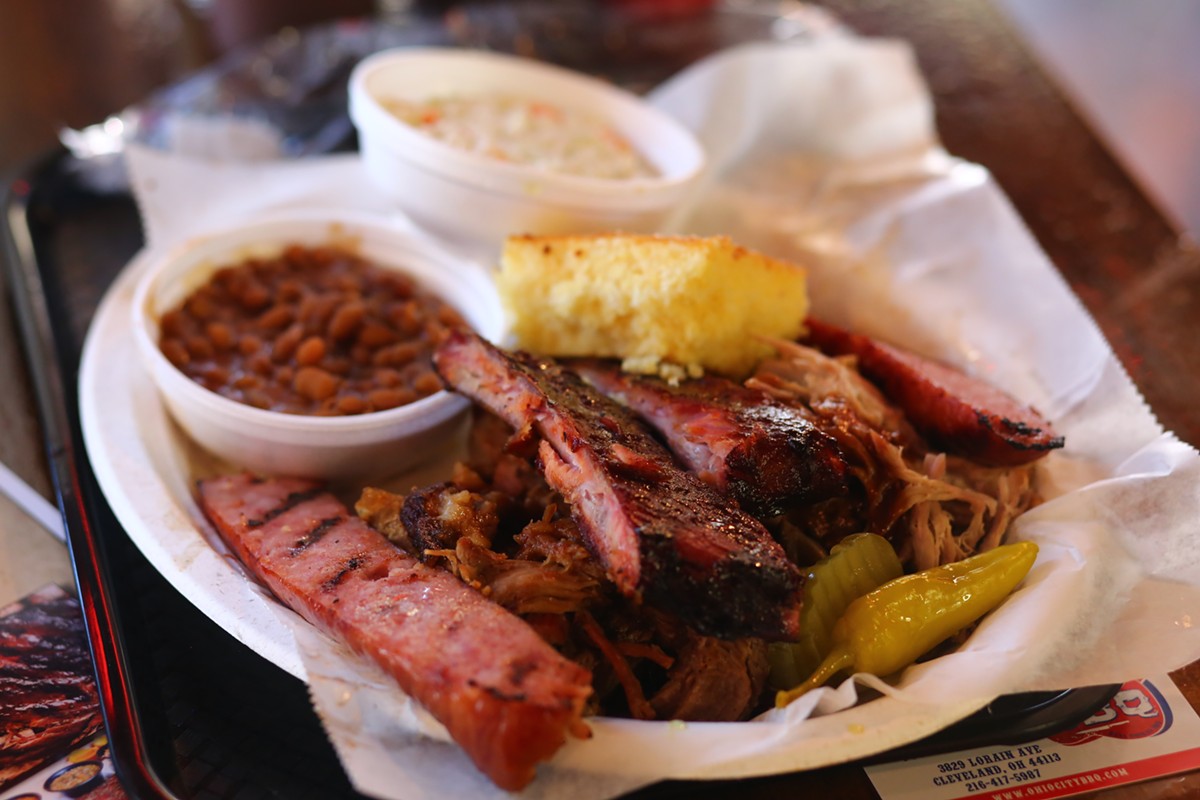 You could spend an entire day poring over the cultural memorabilia that covers nearly every square inch of the walls at Ohio City BBQ. There must be hundreds of individually framed and mounted pieces mostly depicting rock icons like Elvis and Jimmy and Jagger and Johnny, but also luminaries like Marilyn, years of Life magazine covers and a handful of musical instruments tossed in for good measure. We were doing just that when our number was called, signaling that our order was ready for pickup at the counter.

"If the kitchen had spent half the time it took to hang one picture to properly plate our food ... ," my companion stated when we sat down, not having to complete the thought.

If it's true that we eat first with our eyes, we were less than impressed. Our Ultimate Platter ($22) consisted of four types of meats and various sides piled onto a paper plate that was much too small for the task, with some items like the brisket completely hidden from view. In a time when smoke shops are rolling out craft paper-lined trays with artfully arranged meats and sides, this presentation is a bit proletarian.

The good news is that when we did exhume that brisket, the star of Texas barbecue, we were pleased with the appearance, texture and flavor of the meat. The thick slices are tender but not falling apart, with a mild smoke flavor and even milder spice rub. We had the same reaction to the spare ribs, meaty batons that require teeth but still come cleanly off the bone. They were, however, a touch dry, as if they had been cut and held too far in advance. If there's fault to the pair, it's that both the brisket and the ribs would benefit from a bolder spice rub and more robust smoke flavor.

Also on that platter were a few links of juicy, tangy and delicious smoked sausage that almost steals the show. The sausage was joined by a large mound of pulled pork, which had all the signs of good barbecue in that the meat was tender, lightly smoked and sweet tasting. But there was also a massive hunk of inedible, unappetizing skin and fat that somehow got folded into the mix. We tacked on an order of smoked half chicken dinner ($10) and immediately wished we hadn't because it was clearly oven-baked with zero spice, rub or smoke. (The owner confirmed that is was baked, but promised that going forward it would be smoked.)

A second visit netted better results all around, from execution to presentation. The Southern Platter ($17) had the same satisfying spare ribs that popped with just-carved freshness and a heaping helping of smoked, pulled chicken. That smoked chicken, along with pulled pork, beef brisket and smoked sausage, are all available as sandwiches ($8). Ohio City BBQ also sells a delightfully old-school Polish Boy ($7), a no-frills Cleveland pileup of smoked sausage, fries, chip-chopped slaw and sauce.

A few words about the sides: They all need work save for the French fries ($3). The collard greens ($3) were watery, bland and limp. The noodles in the mac and cheese ($3) were overcooked and the sauce, remarkably, had no cheese flavor. The cornbread ($3) was more wet than moist, the baked beans ($2) were likely emptied directly out of an industrial-size can of Heinz, and the peach cobbler ($3) was delivered hot and fresh from the microwave oven. I get that you don't go to a smokehouse for the sides, but they shouldn't be phoned in either.

Owner Nav Singh hired as a consulting pitmaster and coach Gary Carrino, an award-winning competition barbecue cook who competes under the name Blazing Broncos. When we were there, Singh solicited feedback from every diner he could with assurances that his goal is nothing short of smokehouse nirvana. He and his kitchen crew are heading in the right direction for sure.

Located in a cheerful double storefront, Ohio City BBQ exceeds the accepted level of character required for a BBQ joint. The warm, saloon-style space is clad with wood walls and floors, there's a freshly painted tin ceiling, and red neon piping acts like a spiffy ring of fire around the room. Though it's largely fast-casual counter service, staffers could not be more friendly, courteous and genuinely pleased to be there. That — and prices that are more than a couple bucks below the competition — go a long way toward carving out a niche in Cleveland's increasingly competitive smoked-meat market.

Now, if we could only get some ice-cold beer up in here (a possibility down the road, says Singh).