Vita Urbana, located in the freshly minted Shoreway Building (1200 W. 76th St.) in Battery Park, is on track to open its doors within the month, says owner Mike Graley. The all-day gourmet market and café is designed with the immediate community’s needs in mind.

“It’s kind of a new concept, but it’s beginning to catch on,” says Graley. “It’s a breakfast, lunch and dinner restaurant with retail, all in one and designated for the community. I’ve spent a lot of time in Italy, and there they have a lot places that are very similar to this, where you can go in the morning for a cup of coffee and pastry, and then at night for an Irish coffee with a baguette or something.”

The long, slender space is divided into two main areas, with a 50-seat bistro up front and the marketplace in the rear. In the morning a barista will prepare coffee drinks from behind the bar, while grab-and-go items like fresh fruit cups, granola, quiche and frittatas are available for those on the run. At night, chef-partner Scott Popovic will prepare small plates like meat and cheese boards, sliders topped with fried mortadella, risotto croquettes with tomato fondue, and beer-braised short ribs with mascarpone polenta.

Those dishes can be paired with a local craft beer, glass of wine, craft cocktail or a bottle of wine plucked from the large retail section in the back. Also back there will be many of the products featured on the menu, so if you really liked a particular cheese or salumi at dinner, you can grab some to take home on the way out. 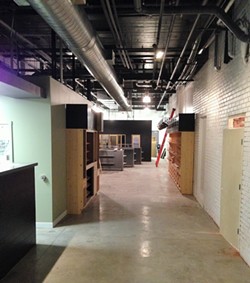 The shelves will be stocked with beer, wine, gourmet cheeses, charcuterie, pasta, olive oil, condiments and a few basic necessities for the neighborhood like paper goods. One section will be dedicated to “first to market” products originating in the Cleveland Culinary Launch and Kitchen. The shop’s product line will adjust according to the wants and needs of the community, says Graley.

“We’ll let the customers dictate what they want, and whatever they want we’ll cater to,” he says.

Graley, who opened Battery Park Wine Bar back in 2010, later selling that nearby spot to Susan Walters so she could open CHA Spirits & Pizza Kitchen, says that he is thrilled to be back in his old neighborhood. He’s banking on continued growth in the neighborhood, fueled in no small part by an additional phase of residential development.

Graley says that he already has plans to open additional Vita Urbana locations in, naturally, other urban Cleveland neighborhoods.