Party on a Plate

The fun's in the food at funky Reddstone. 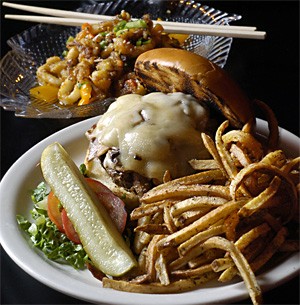 Walter Novak
A juicy burger, fresh-cut fries, and tender calamari, washed down with a cold Pabst.

With apologies to rockin' restaurateur Josh Kabat, we'll admit we were a tad worried when Reddstone popped up on our schedule. After all, when the former Peabody's Concert Club owner launched his modest Detroit-Shoreway watering hole in October, he told us he was mostly "just looking for a place to party." Sure, he balanced the bravado with a vow to dish up first-rate food. But while Kabat's culinary cred is respectable — he's done stints at Akron's Treva, Wadsworth's Galaxy, and Michael Symon's Lola, where he worked as a line cook — it's been years since he's overseen a kitchen.

Would the food rock, or just roll over and play dead?

Reddstone's surroundings seemed equally problematic. Settled into the former Snicker's Tavern, at the bottom of a dead-end street in a tattered residential neighborhood, the squat brick building (now painted a brilliant crimson) has never been on trendinistas' road maps. Yet with the upscale condos of Battery Park sprouting just to its east, we could see that this sort-of-shabby street corner could soon become part of a happening scene.

The question was how Reddstone would fit in. For an answer, we needed to catch the crew in concert.

The show began the moment we walked through the door and into a snug, softly glowing cocoon filled with high-tops, banquettes, and a sleek wooden bar. Lights (mostly red) were dimmed, the White Stripes cranked high, and the usual beer signs had been nixed in favor of mirrors and a Taittinger poster. The upshot was a "West-Side-tavern-meets-Victorian-parlor" kind of space, topped with an ornate tin ceiling and draped with crimson swags.

This obviously called for a beer — domestic, imported, on tap, in bottles, or in a can (the requisite Pabst tall boy). Best of all, happy-hour prices were still in effect, knocking a dollar off the cost of each drink and bringing our bottled Blue Moon down to $3.25.

Of course, the eats were the featured act, and here Kabat's small, handwritten menu seemed right in tune. For one thing, Kabat knows his ingredients — the freshly ground sirloin that makes up the plump, hand-formed burgers, say, or the impeccably fresh squid that goes into his "Tubes & Tentacles" starter. (Try it, and you'll soon forget the not-so-tempting name.)

Moreover, he handles those ingredients with respect. Goosed with savory infusions or topped with high-test add-ons, the two-fisted burgers couldn't be livelier. Adding to their luxe was a golden tangle of freshly cut frites, humming with Kabat's secret seasonings. Rosemary? Sea salt? Lime zest? He's not telling.

That riff on calamari is a showstopper too. It's dredged in curry-flecked flour, sautéed in hot garlic oil, then tossed with skinny strips of pepper, carrot, and scallion. For final fillips of flavor, Kabat adds a sweet-and-spicy slather of Rica Rica sauce (a combo of hot peppers, ginger, and sesame oil, from Cleveland's own TeaHouse Noodles). And for some added texture, a sesame-seed glaze.

We've had bigger wings than the ones at Reddstone. Yet bathe them in tangy homemade barbecue sauce and serve them up all crisp and moist, and you won't hear us complaining. Likewise, while it won't go head-to-head with Morton's, a tender 12-ounce strip steak, served with garlicky smashed spuds and two ho-hum onion rings, made a great value at just 15 bucks.

That's not to say the kitchen didn't flub the occasional note. We expected more from the sweetbread pizza, which featured too few bits of crispy sweetbreads, too much in-your-face garlic-and-peppercorn purée, and a dull, heavy crust. We tried again with the Cleveland Heart Attack, a combo of Italian sausage, cubed ham, pepperoni, bacon, fresh jalapeño, and Pepperjack and cheddar cheeses, on a well-balanced tomato-sauce base. Once more, though, the dull crust and stingy toppings turned the pie into something of a yawner — more "muscle strain" than "heart attack," a companion opined.

Then there was the Payne Avenue Pasta, a sassy-sounding combo of spaghettini, veggies, Rica Rica sauce, chicken, and a side of five-spice garlic bread. Somehow, the chicken and the garlic bread never made it to the plate; what did arrive was good, but certainly not the anthem we'd been longing for.

As for sweet endings, desserts aren't on the menu yet. But Kabat says they are coming, along with delivery service and the return of Sunday brunch. On the other hand, live music is off the table, at least for now, thanks to rumblings from the nearby neighbors.

Maybe that detracts from Reddstone's rockin' role. But for fans who dig good bar food, the real party is on the plate.