Photo by Emanuel Wallace
Boiling Seafood
Ever since Winking Lizard closed its doors on Coventry last summer after nearly 20 years, there has been a flurry of activity inside the space. But all of it has been concealed by craft paper, leaving passersby few clues as to what would replace the wing-and-beer joint. The name – Seafood Shake – conjured images of liquefied sea life served up by the glass.

Of course, those familiar with the increasingly popular seafood-in-a-bag concept knew better.

“A lot of these are popping up across the U.S.,” says owner Hangchun Zheng. “I think they started in the south and out west. They are for the true seafood lover.” 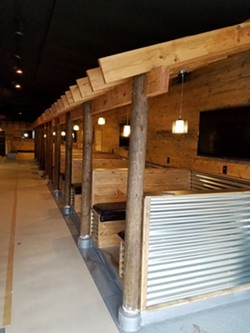 Dooley Construction
Like Boiling Seafood on Lee Road and the soon-to-open Boiler in Gordon Square, Seafood Shake (1852 Coventry Rd.) is indeed modeled after those festive seafood concepts. Various types of seafood are boiled in a flavorful broth, tossed in an aggressively seasoned spice mixture (hence the “shake” moniker), and delivered to the table in clear plastic bags. Diners can pour the contents out onto paper-topped tables or eat straight out of the sack. This is messy, delicious fun.

“Where I come from you eat the seafood by hand,” adds Zheng. “How else are you going to eat it?”

Since taking possession, the owner has completely gutted the 3,000-square-foot space. Built-in booths are covered with awnings to lend a casual “outdoor picnic feel” to the interior.

A 12-foot-long, three-level fish tank will be filled with live seafood like lobster, Dungeness crabs, and other fish. In-season specials like live king crab and crawfish will join the usual line-up of oysters and shrimp. All of it will be sold by the piece or pound and is prepared in one of a couple ways.

“The customer has a choice of getting it Cajun-style in the bag or fried in our special breading,” says Zheng.

Whole lobsters will be cut into pieces, lightly breaded and fried in the shell, similar to Chinese-style salt-and-pepper baked shrimp or lobster. The crust is very thin and very crispy.

The restaurant will seat about 110 guests throughout the space. While the bar in the middle space has been removed, there will be a bar near the original one in the first room.

Zheng grew up in Cleveland and went to Ohio State University. He operates three HC Way Asian Bistros in Columbus.

Look for Seafood Shake to open in about a month.