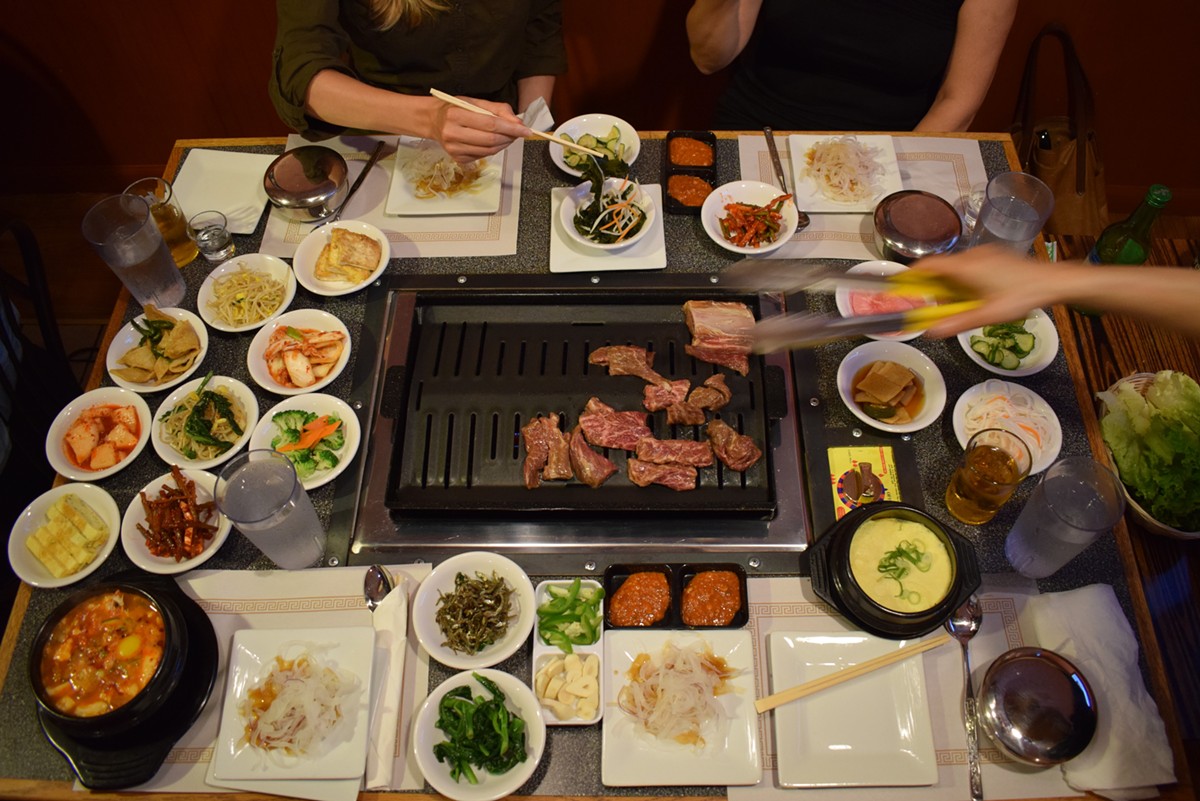 There's the intimidation that comes from encountering an unfamiliar menu, and then there's the intimidation that arrives in the form of a wobbly stainless steel cart that gets wheeled right up to your table and is absolutely laden — on two separate levels — with food, both raw and prepared. By the time our server finishes the task of unloading the goods, not one square inch of tabletop remained visible. It was at that moment we knew we had our work cut out for us.

Sure, it takes a bit of effort to get settled into a groove at a Korean barbecue joint, but once you do, there are few more exhilarating dining experiences. Bring the right tablemates and you're in for a boisterous, delicious and, at times, chaotic meat-filled ride. Paired with plenty of ice-cold OB beer ($4.75) or fiery Chamisul soju ($14.95), dinner doubles as the night's entertainment.

Our lively group was arranged around a table at Rising Grill, the latest business to occupy this on-again, off-again Asian eatery on Payne Avenue. For nearly 30 years, this bland wrapper was home to Seoul Hot Pot — until it closed, and then reopened, and then closed for good. A short-lived replacement popped in for a bit before vanishing like a puff of smoke in the breeze. The collective sadness of local Korean BBQ fans, however, was quickly ameliorated by this latest tenant.

At the heart of any great Korean barbecue joint is the grills, which can range from janky tabletop skillets to sleek infrared-powered cookers. Rising Grill owner Byung Im invested in all-new gas grills for each of the four barbecue tables up front. What's more, he improved the exhaust system, the second most important part of the setup. The cooktops are hot, responsive to adjustments, and roomy enough to accommodate sufficient meat for the whole crew.

If you're new to the game, it's wise to hop online, check out the menu, and do a little research. The options are a bit daunting given that there are various meats, cuts, treatments and portion sizes. Items range from marinated boneless chicken breast and the ever-popular bulgogi on up to a $120 combination platter with a variety of meats and seafood. Our S2 ($97) included boneless beef short rib, ribeye, pork and chicken. If that sounds like a lot of money, try dividing it by five and still banking on leftovers.

To get us started, the server (often the owner) snipped some pieces of meat and arranged them on the preheated grill. After that, we were pretty much on our own. It's not that the staff isn't gracious and helpful, it's that they are often so weeded that all they do is sprint from request to request. We find that the slower we go, the happier we are, adding small quantities of meat so we can easily manage them and enjoy them hot off the grill. All of it is thinly sliced for quick cooking and most, but not all, is marinated in a sweetened soy-based sauce with garlic and sesame oil.

A stack of cold, crisp lettuce leaves are on hand for making little bundles of meat, sauce, and garnishes. Rising Grill's banchan game is strong, and our table received no less than a dozen sides of raw, pickled, fermented, dried and/or cooked veggies, hard-cooked eggs, even seafood. Most barbecue combos also include bowls of soondubu jjigae, a savory soft tofu stew.

It would take weeks to work through the non-barbecue portion of the menu. Familiar starters are here, like mandu ($6.99), addictive Korean dumplings that arrive deep fried rather than the typical steamed or pan fried. The restaurant's version of seafood pancake ($13.99) arrives crisp-edged and fluffy, loaded with bits of squid, shrimp, clam and scallions.

There are rice dishes like the textbook dolsot bibimbop ($12.99), a version of the classic shredded veggie, egg and rice bowl served in a molten-hot crock that transforms the rice on the bottom into deliriously crunchy bits. There are noodle dishes like the summer-appropriate bibim naengmyeon ($14.99), a refreshing but spicy serving of cold buckwheat noodles and thin-sliced beef. And there are soups, stews, hot pots and casseroles too numerous to count, including the rare-around-here sullongtang ($14.99). This restorative beef bone broth arrives milk white, with a few glass noodles, some lean beef and a sprinkle of scallions. It is utterly unseasoned, sided by a dish of coarse salt for the diner to do so at will.

Unfortunately, Rising Grill doesn't take reservations for its grill tables, instead relying on a first-come, first-served system. Waits for those tables are common, but the kitchen does have tabletop cookers for those seated in the dining room, a fine alternative. Speaking of waits: I now bring cash here, not because Rising Grill doesn't accept credit cards, but because I once waited 25 minutes for the check.