Pulpo Beer Co. to Open Taproom and Restaurant at Crocker Park in Westlake 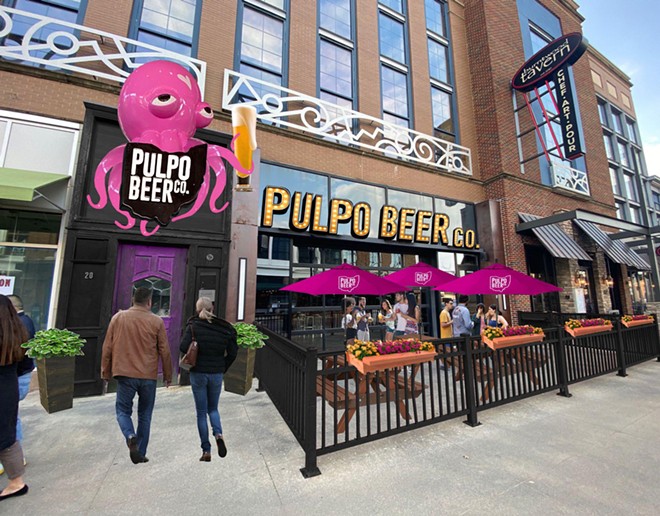 Juan Vergara
In 2020, Juan Vergara and his team took over the former Brim Kitchen and Brewery space in Willoughby, where they created a unique dual-concept eatery with a first-floor Hola Tacos and a second-level Barroco Arepa Bar. Not long after, he partnered with some family members to launch Pulpo Beer Co., Ohio’s first Latin-owned brewery, in the same 10,000-square-foot building.

Now, Vergara and those partners are expanding the Pulpo brand with a new taproom and restaurant in Westlake. He recently signed a deal to take over the former B Spot space at Crocker Park, where the Willoughby-based brewery will be able to carve out its own niche separate and apart from Barroco and Hola.

“It’s cool because of both of those already known concepts, but Pulpo doesn’t have its own food,” Vergara explains. “We want to open a taproom to get our beer out to more folks that might not be willing to go all the way out to Willoughby, but also to take the opportunity to give Pulpo its own image and identity and food.”

Vergara says that the 4,000-square-foot space will be completely reimagined in ways only Vergara can produce.

“Designing the space and how the atmosphere is going to be is definitely one of my favorite parts of opening new location or business,” he says.

While the menu is still in early days, Vergara promises that it will not be a copy of either Barroco or Hola Tacos, adding that it will be unique and delicious.

Vergara, who also owns the Barroco restaurant at Crocker Park, says that the long-vacant space “has been winking” at him for a long time. He loves the location and finally decided to grab the opportunity.

“We are stoked with the success we have had so far in our Barroco location at Crocker Park in the past four years and couldn’t be happier to add yet another of our concepts to this beautiful and busy shopping district,” he says.

Look for Pulpo to open this summer.