The chef’s unfussy, seemingly effortless style of cooking is tailor made for sunny breakfast dishes and wholesome lunch plates 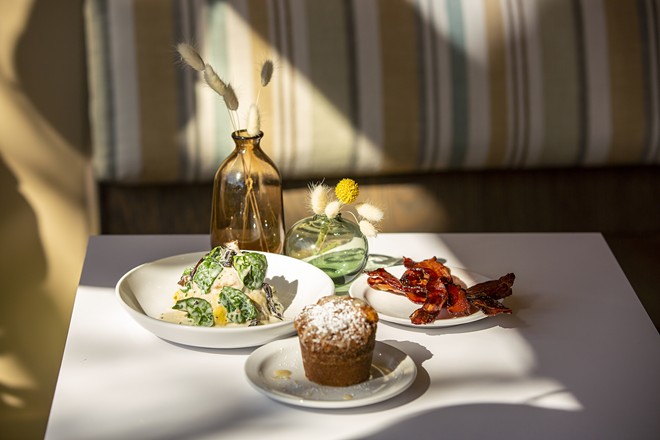 It’s difficult to disassociate Karen Small from her trailblazing farm-to-table bistro Flying Fig. For diners too young to recall meals at the Ninth Street Grill at the Galleria, where Small helmed the kitchen in the late `80s, or the long-departed Fulton Avenue Café in Ohio City, Small and the Fig have been inexorably linked in our collective minds for more than two decades.

But it was Small’s relatively short-lived exurban café Jezebel's, which she ran in Bainbridge prior to opening the Fig, that offered perhaps the most accurate glimpse into the chef’s culinary DNA. The operating hours of that breezy breakfast, lunch and brunch spot dovetailed with Small’s own circadian rhythm as a self-described morning person. Now, after 23 years of working against nature, Small has swapped the twilight hours of dinner service for the break-of-day breakfast and lunch game.

In ways that extend beyond its hours of service, Juneberry Table is a fitting match for Small’s approach in the kitchen. The chef’s unfussy, seemingly effortless style of cooking is tailor made for sunny breakfast dishes and wholesome lunch plates. Hers has always been an ingredient-driven process, but here, that process is shaped largely by the chef’s years spent living in Southeast Ohio, the western edge of Appalachia. In Small’s hands, humble ingredients like buckwheat, sorghum, rhubarb and cornmeal, along with seasonal greens, fruit preserves, fermented vegetables and cured meats, exit the kitchen in attractive and delicious form.

Every restaurant should have a signature item and at Juneberry, that dish might be the biscuits ($6) with sorghum butter and jam. The immeasurably satisfying biscuits are meltingly tender, perfectly balanced between sweet and salty, with uber-crispy edges from bits of cheese that leak out and caramelize on the hot sheet pan. The whipped sorghum butter is creamy and sweet, with hints of molasses and sassafras. On my next visit, I plan to order the biscuits and gravy, which features those stellar biscuits, soft scrambled eggs and velvety mushroom gravy.

Operating off an all-day menu, Juneberry gives diners the choice to go either the breakfast or lunch route. Some dishes, like the Breakfast Salad ($14), blur the lines. A bountiful assortment of greens and veggies is dressed in a flavorful but delicate vinaigrette and “garnished” with two golden, jammy eggs, two thick strips of glazed bacon, and toast in the form of sourdough croutons.

For purists, there’s the Juneberry Breakfast ($12), a diner-style platter with a pair of lacy-edged fried eggs, griddled potatoes tricked out with bacon and cheddar, and thick toast and jam. Small isn’t doing the bread baking as she was at Jezebel’s, electing instead to bring in goods from great local bakeries like Leavened. Those hearty, often seeded artisan-style breads are the unsung hero at Juneberry, serving as the sturdy base to an avocado toast ($10) with chunky avocado, a kiss of honey, nuts and a pile of greens. Diners can add an egg ($2) or bacon ($2) – or both – to their toast.

There’s something about Juneberry’s chicken and waffles ($16) that sets it apart from the rest. Maybe it’s the Ohio cornmeal waffles, or the pickle-brined local chicken, which is dredged in panko and fried to the perfect chestnut brown. To dress it up, there’s Ohio maple syrup and that alluring sorghum butter.

The kitchen veers away from the conventional three-slice stack and triangle cut with its Club ($14). This meaty sandwich is stuffed with great-quality smoked ham and turkey, bacon, thin-sliced pickles, Swiss, lettuce and sauce. It’s griddled until warmed through and sliced in half.

Whether she wanted to or not, Small added a burger ($14) to the menu and it’s one of the best I’ve had recently. Tucked into a Good Company milk bun, the smashed patty gets the classic treatment with American cheese, lettuce, pickles and comeback sauce. There’s also a fried bologna and egg sandwich and one starring “cold BBQ meatloaf” that sounds intriguing.

If there’s a more pleasant room in which to gently ease into one’s day, I’d love to see it. This sun-soaked urban diner, formerly home to Jack Flaps, dazzles with light and color, but in an understated, peaceful way. And unlike most diners, this one offers guests fizzy pét-nats by the glass, along with a nice selection of other wines, beer and even cocktails.

Over the 20-plus years that Small has been cooking in Ohio City, she has watched her neighborhood evolve into one of the most in-demand residential communities in town. Many of her neighbors work from home, affording them the modern luxury of an unhurried weekday breakfast or lunch. To those people, Juneberry is now an indispensable amenity.