Rhinegeist Brewery to Expand Distribution into Cleveland and Akron 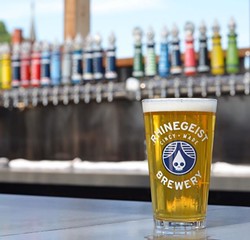 Cleveland craft beer fans will soon spot the popular Cincinnati-based Rhinegeist beers and ciders in local bars, restaurants, liquor and grocery stores. Draft products will begin popping up the second week in August while packaged beer will start showing up the last week in August.

Rhinegeist translates to “Ghost of the Rhine” and refers to the brewery’s location in the historic Over-the-Rhine neighborhood. The brewery is housed in the old bottling plant of the Christian Moerlein Brewing Company, once the city’s largest brewery. Brewmaster Jim Matt, formerly of Sun King brewery, has a weak spot for dry, hoppy, West Coast-style IPAs.

“Cleveland is a great craft beer town and we knew we would need to find the right partner if we weren’t going to do it ourselves,” says Bryant Goulding, co-founder and VP of sales. “The House of LaRose [distributor] is a force in the Cleveland and Akron market and shares our commitment to customer service and building the Ohio craft beer market. We are thrilled and excited to announce this partnership and Rhinegeist’s expansion into the great city of Cleveland. Keep your eyes peeled for some exciting launch events rolling out the second week in August.”