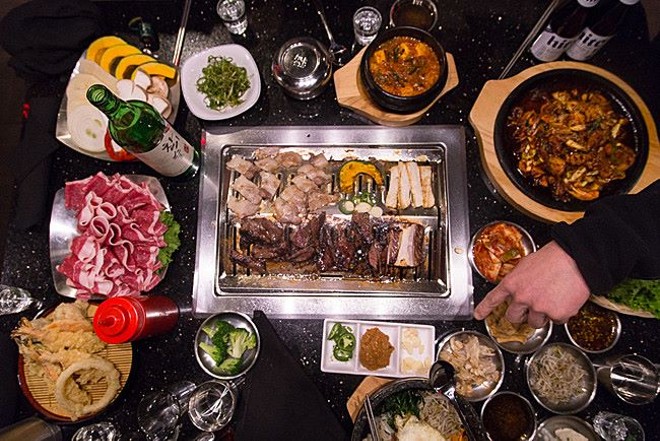 Rising Grill
Chalk up another win for Cleveland’s Asiatown neighborhood. As of May 14, the space long occupied by Seoul Hot Pot – and briefly occupied by Hansol – has a new operator. After arriving in the neighborhood two years ago to work as a chef, Byung Im chose to invest in a restaurant of his own. That restaurant, Rising Grill Korean Barbecue (3709 Payne Ave., 216-465-3561), already is drawing high praise.

Manager Jessica Singh says that while dishes on the menu might appear familiar to Korean food fans, the quality of the ingredients and level of execution are anything but.

“This is upscale, restaurant-style Korean food,” she says. “This is a different level of Korean food.”

The lengthy menu starts diners off with expected appetizers like mandu, the ubiquitous and delicious pan-fried dumplings, and seafood pancakes. But also kimchi pancakes and a spicy stir-fry of rice cakes and fish cakes.

The chef prepares a wide assortment of ambitious-sounding soups, stews and casseroles. From the straightforward housemade dumplings in beef broth to the elaborate seafood stew flush with crab, squid, shrimp, octopus and clams with vegetables in spicy broth. There also is kimchi soup with pork and tofu, spicy fish roe stew with tofu, and seolleongtang, a milky-looking soup made by slowly simmering beef bones for hours.

There’s bibimbap, of course, but also a number of rice bowls topped with grilled fish such as salmon, mackerel and eel. The chef rounds out the menu with more than a dozen stir-fried noodle dishes, signature entrees and even an assortment of Korean-style Chinese dishes like sweet and sour pork or chicken.

For many of us, it was the communal grill tables that kept us coming back to Seoul Hot Pot all those years. The best thing to arise from this change in management is news that the tables have been updated to new gas-powered grills with  quiet exhaust hoods. It isn’t just the hardware that received an upgrade, but also the software. The chef is using top-quality – even Prime – beef for his kalbi and bulgogi, but that’s just scratching the surface. The number of meats and treatments has skyrocketed, with options covering chicken, pork, duck and seafood. Extravagant combination platters can include marinated bone-in beef short ribs, ribeye, shrimp and abalone.

During lunch, there is a pared-down menu of soups, stews, casseroles and kitchen-prepared barbecue.

Rising Grill is open every day but Tuesday for lunch and dinner.