Russo's on the Rise

Chef David Russo's Peninsula restaurant belts out the flavors -- and the songs. 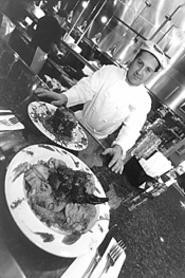 It was sometime between the fried oysters and the tagliatelle that the tenor -- a regular customer with a yen for opera and good food -- took the floor, wrapping his impressive pipes around the notes of an Italian aria with unbridled passion. For an amateur, he sang with astonishing panache, his voice piercing the considerable background din, then spreading through crowded Russo's like a slow-moving river of warm toffee.

While the tenor sang, chef-owner David Russo -- usually seen bolting from one part of his open kitchen to another, tossing around sauté pans, colanders, and ladles like a man possessed -- paused for a rare moment, his head bowed respectfully, and savored his friend's impromptu serenade until the final note trailed off and the room erupted in applause. Most of the room, that is . . . not counting the eight well-lubed golfers in the back corner, who launched into a raucous songfest of their own ("Take me hooome, country roaaads, to the plaaace I be-looong . . ."), or the music-critic wannabe who registered her opinion of Mr. Opera's performance by throwing her head back and baying like a hound. Apparently, once you allow guests to break into Verdi, it's hard to draw the line at John Denver or, for that matter, Rin Tin Tin.

But if the howling and harmonics sometimes give the restaurant the air of a peculiarly well-appointed middle school cafeteria, Russo's zesty food is mostly rated R, designed for mature palates that can take the heat. Former head chef at Akron's now-defunct Liberty Street Brewing Company, Russo gained a devoted following with his piquant gumbos, saucy jambalayas, and signature Navajo tacos (highly seasoned meats and veggies, piled onto fat pillows of Indian fry bread and finished with salsa and a cooling dollop of crème fraîche). When he opened his own place on State Road over the summer, in a handsome stone- and cedar-sided building that also includes his brother-in-law's HVAC shop, the hot stuff came with him, plus a host of revved-up pasta, pork, and seafood dishes that have been drawing crowds since day one.

The wildly eclectic menu borrows heavily from Cajun, Italian, and Southwestern pantries, but also throws in Carolina barbecue, Oklahoma-style chicken-fried steak, Texas red chili, and daily specials ranging from Korean-influenced kimchee and pork to Japanese-accented seared yellowfin tuna with ginger-sake sauce. This "you name it, we got it," philosophy is endemic at regional restaurants outside of Cleveland and seems to be an attempt to attract the widest possible constituency from among a population that still views dining out with some trepidation. (This is in sharp contrast to the menus in Cleveland's chef-driven bistros, which keep getting smaller and one day will probably feature only organic chicken cheeks, served on a bed of baby arugula, hand-picked from the chef's windowbox garden beneath the light of a full moon.) Too bad, though, that the scattershot approach usually backfires, and chefs who do too much often wind up not doing anything particularly well. It's a tribute to Russo's skill, then, that he and his staff generally pull off these divergent cooking styles with gusto and grace.

You've got to admire a crew that can cook up an exquisite pomodoro sauce, as rich and authentic as anything to come out of Nonna's kitchen, then turn right around and bake a pecan pie so unexpectedly delicate that it seems in danger of floating right off the plate. (No surprise to learn the pomodoro is, indeed, from an old family recipe, and the pie is a Paul Prudhomme original that Russo learned while working for the ragin' Cajun.) His golden chicken étouffée, with breast meat that melts in the mouth like mascarpone, was so voluptuously seasoned that we couldn't stop eating it, even as its black, white, and cayenne pepper punch brought sweat to our brow. Firm, translucent ribbons of tagliatelle, tossed with garlic, olive oil, and lush chard, were such a feast of textures that a usually well-disciplined size-3 companion chowed down like a trucker. And that Asian-accented yellowfin tuna -- quiveringly rare, cashmere plush, and lightly piqued with hints of sesame and ginger -- was utterly without peer. Yes, we smirked when our young waitress first suggested trying the Pernod-buttermilk dressing on our simple house salad; disparaging thoughts of nasty, licorice-flavored ranch dressing lurched through our imagination. But one bite was all it took to turn our apprehension to approbation: We now understand the brilliance of combining brisk romaine with the slightly bitter bite of Pernod and balancing it with the mollifying richness of dairy, and Russo is probably a genius for envisioning what, in hindsight, seems so obvious.

Such victories make it easy to look past the occasional gaffe, like the rubbery grilled squid appetizer and the tough, chewy steak strips in the fiery Navajo taco. Otherwise perfect chicken-fried steak also lost some points for its unexpectedly spicy pan gravy. While the chile-heads at the table thought the gravy was little more than pleasantly piquant, neither the menu nor the server gave us a reason to anticipate any amount of fire, and a capsicum-phobic companion, who had chosen the dish specifically for its purported mildness, was distressed. (Russo said later that the dish was not intended to be spicy.) And then there was the strange chocolate "tuille" (thick, limp, and pliable, rather than thin and crisp), filled with an off-kilter, Grand Marnier-heavy white chocolate mousse, that we pushed aside in favor of pastry chef Carl Dupree's dreamy peanut-butter mousse pie: cloud-light, not too sweet, and piled high with real whipped cream.

Russo's international wine list is as pleasantly broad as the general menu, ranging from soft, fruity Viogniers to spicy, robust Zins, with prices (mostly in the $18 to $40 range) that hover around the standard 100 percent markup. (As usual, a more expensive reserve list, with bottles in the $50 to $100 range, reflects a smaller price hike.) While the listings don't include vintages (an annoyance), they have been grouped according to style (a boon), with descriptive notes to help guide novice wine drinkers. Yet we can't understand why a spot that obviously takes its wines seriously chooses to store them right next to the open kitchen: Our bottles of Lyeth Red Meritage and Hess Select Cabernet Sauvignon, for example, had soaked up enough stovetop heat to feel like bath water. And while it was funny when a companion jokingly called for an ice bucket, it won't be so humorous if the wines start to deteriorate from poor storage.

The open kitchen does, however, make a fascinating focal point for the otherwise boxy room, and interested diners will enjoy watching Russo and his crew perform their energetic culinary ballet from perches at the sleek granite-topped bar that surrounds the work space. On the other hand, diners who hope to focus on their companions will prefer one of the white-paper-topped tables or high-backed booths -- set with bottles of Tabasco and Melinda's Habañero Pepper Hot Sauce -- that line the room's perimeter. Whatever you do, though, don't accept a seat at one of the three or four tables located near the hostess station: Plunked down in the middle of a chi-challenged Siberia between the front door and the service hall, the grimly lit tables are uncomfortably exposed and yet completely cut off from the merriment in the main portion of the dining room. Avoid those seats at all costs. Because once the singing starts, you won't want to miss a beat.