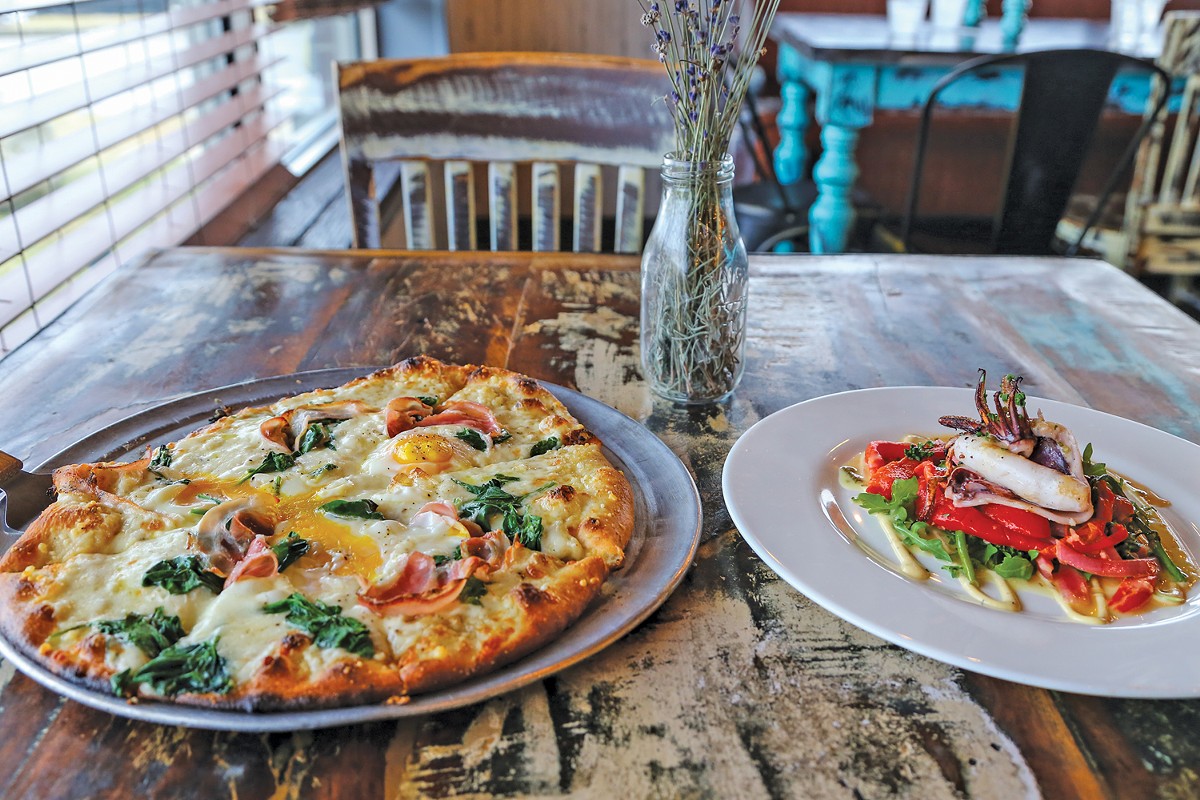 As large as the Texas-size tabletop happened to be, it was nearly obscured from view by the trio of pizza pans that descended like spaceships from above. Everything's bigger at Salted Dough and though they're billed as 18-inchers, the massive pies slicing through the air at this Broadview Heights restaurant appear to be cheese-topped flying saucers out to colonize the solar system.

It's another weekend night in the suburbs and this two-month-old pizzeria is absolutely jumping. There's a slight bottleneck at the front door, where small groups and outsized families vie for the next available table. As stools free up at the generously proportioned bar, they quickly are snatched up by couples, who eagerly swap a little comfort in exchange for speed. Meanwhile, in the 80-seat dining room, guests giddily lap up those slices alongside decidedly non-red-sauce-Italian fare built around pasta, fish, chicken and beef.

It seems that owner Jeff Fisher knew what he was doing when he decided to open Salted Dough 13 miles south of places like Crust and Touch Supper Club, eateries indelibly marked by the veteran chef's culinary aptitude. Down here, Fisher offers large portions of agreeable food at sensible prices, along with enough cold beer and easy-drinking wine to melt away the stresses of the day.

"We're not reinventing wheel," he admits, "just paying attention to the details that make a simple dish special."

It bears repeating that good pizza starts at the bottom. Fisher knows dough, and the pizzas that relentlessly exit the industrial-size brick ovens in the open kitchen look, smell and taste divine. They possess the most sought-after attributes in a crust: simultaneously thin and airy; pocked, blistered and crisp but chewy; aromatic and meticulously topped. Nearly flawless in design, the Breakfast for Dinner ($14, 10-inch) combines pecorino, spinach and crispy thin-sliced pancetta. A just-cooked egg boasts a set white and a runny yolk, which coincidentally makes a fine dipping sauce for the rims. A scant spritz of truffle oil pairs harmoniously with the ham and eggs.

Diners can select from three sizes and more than a dozen builds ranging from the austere margarita, with little more than crushed Italian tomatoes and fresh mozz, on up to the autumnal squash pie with roasted butternut, thick-cut bacon, Danish blue cheese and fresh sage. Go rogue and design your own from a roster of gourmet toppers.

Fisher's pizza is like a gateway drug that leads, inevitably, to the procurement of other foods. The panzanella salad ($6) puts yesterday's bread to good use by tossing it, along with fresh greens, tomatoes, cucumbers and thumb-size dollops of goat cheese, in a zippy red wine vinaigrette. While the meatball ($10) appetizer is conventional, it's also flavorful and robust given the size and quantity of the balls resting in marinara. The calamari ($13), on the other hand, is anything but typical. Fisher manages to finesse whole squid bodies into tender grilled filets, which he then pairs with butter beans, poached tomatoes and blanched green beans in a cool, refreshing and lemony Mediterranean-style salad.

Salted Dough takes an interesting approach to entrees as well. There are just two housemade pastas — ravioli and gnocchi — but the ravioli changes almost daily and the gnocchi comes in five different trims. The top seller is the one that marries those plump dumplings with peas, prosciutto, cream and cheese. It's a bit of a belly-buster to be sure. All models come in at $16.

A small chalkboard by the open kitchen (and, hopefully, your server) indicates the day's fish, chicken and beef specials. A salmon Oscar ($26) stars a meaty flank of pan-seared fish that is capped with a crab cake, perched atop a pool of rich, cheesy risotto, ringed by sauteed Brussels sprouts, and gilded with a lava flow of creamy bearnaise. Like the sweet pea gnocchi, it's an over-the-top indulgence that's nearly impossible to finish.

If you do manage to "save room," consider a sweet finisher like the tiramisu or gelato, which are made from scratch like pretty much everything at Salted Dough.

Those weekend crowds are great for the bottom line, but they can and do exert pressure on the bartenders, servers and kitchen staffers who struggle to keep up. Despite this fact, it's not uncommon to watch a flour-dusted Fisher make an appearance in the dining room to perform slight-of-hand tricks for tiny tots. If you want to know what pure joy looks like, make a ball of dough seemingly appear out of thin air and present it to a wee one.

The team did an adequate job of taking a bland strip mall space and imparting it with some color and life. Sporting a sort of DIY farmhouse-chic vibe, the cavernous room is bright, loud and boxy. A second entrance is designed to accommodate take-out orders and future grab-and-go foods like salads, sandwiches and giant slices.