For pure tastes that evoke the heartland of Ohio, that's exactly where you have to go. 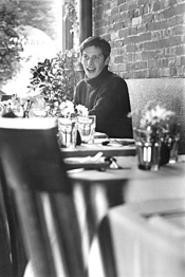 Walter Novak
Mike Mariola, South Market's main magician in the kitchen.
Eating in an earth-friendly way is a concept that can unnerve even those of us who've long abandoned the fear of all things soy. But Wooster's South Market Bistro, which opened in July, is one more reminder that we can find environmentally sound agricultural practices and mindful living in the same place as stellar food made with straight-out passion.

Not that we'd expect anything less from an endeavor inspired, at least in part, by well-known sustainability advocate Parker Bosley. South Market Bistro's owner and executive chef, Michael Mariola, and his chef du cuisine, Michael Ollier, both spent time in Parker's New American Bistro, Bosley's Ohio City restaurant, learning to work magic with seasonal, regional, and mostly organic ingredients. Like Bosley, both men also studied and worked in Europe, where they became fluent in culinary French. Bringing such precision to bear on our bountiful indigenous food products (sweet corn, green beans, tomatoes, goat cheese, mushrooms, poultry, and the like) not only translates into satisfying eating, but moves us closer to developing a distinctive Ohio cuisine -- something strangely lacking in a state that teems with small family farms.

But enough already with the pedantry. The bottom line is that the food at South Market Bistro is excellent, if perhaps trading too heavily on the distinctive Parker's menu.

Still, if the bistro's small list of dinner offerings -- a half-dozen starters, five or so entrées, and three desserts -- isn't wildly inventive (grilled hangar steak with roasted shallot sauce here, pan-seared sea scallops piqued with bacon there), the bistro's warm, inviting ambiance is entirely its own. Shoehorned into a vintage brick building in downtown Wooster, the narrow, high-ceilinged dining room, with stone and polished wooden floors, emanates a homespun charm that seems completely at one with the earthy, honest food. Even the pottery table settings, created from Ohio River Valley clay by artist Emily Moorefield (Mariola's wife and partner), foster a rough-hewn appearance echoed in the textural, artisanal quality of the food. The deep ochre paint on one wall brings to mind whole-grain mustard or maize; depending on the light, the hue of another wall conjures up images of chocolate or brown mushroom gravy. And thriving green house plants, along with jazzy background music and soft lighting, infuse the room with energy and vitality. No wonder the restaurant bustles at both lunch and dinner, with a buoyantly eclectic crowd of workers, shoppers, and retirees, as well as long-haired academics and flannel-shirted students from the nearby College of Wooster.

What strikes a diner first about Mariola and Ollier's cuisine is its immediacy. That is, their food tastes like what it is. If you like your mashed potatoes laced with wasabi, say, or your beef soused with truffle oil, keep walking. These pristine ingredients, simply prepared, can scarcely be improved upon. And so, if you crave the essence of Ohio sweet corn, captured in a bowl of creamy soup, or the purity of an heirloom tomato, served simply sliced and faintly salted, you've come to the right place.

That less-is-more philosophy is clearly outlined in one of the duo's most memorable appetizers, a dish almost spartan in its simplicity: two jumbo organic chicken eggs, hard-boiled, cooled, and halved, sprinkled with salt and pepper, and served with rich homemade mayonnaise and a slender bundle of blanched, chilled, and barely seasoned green beans. Each simple, carefully prepared component tasted like the archetype of its kind: aggressively fresh and completely natural. Eaten for lunch with slices of coarse bread, freshly carved from a round peasant loaf and served with a slab of sweet butter, this was the very spirit of bistro fare.

Terrine of organic rabbit, another appetizer that could easily double as a light lunch, was similarly rustic. Bits of dried apricot and tender white loin meat were incorporated into each slice of coarse, mildly flavored pâté, simply served with a few sweet-tart cornichons, a mound of sweet onion "jam," and a spoonful of whole grain mustard. A bite of this . . . a bit of that . . . and a smidgen of the other . . . and an atavistic sort of gustatory bliss ensued.

At dinner, main-course favorites included a dark, autumnal dish of slow-roasted pork shoulder, served on a bed of roasted potatoes, beets, onions, and carrots, spiked with plump brandied prunes and apricots; and firm penne pasta tossed with a mélange of tender-crisp veggies, Parmesan cheese, and an outstanding fresh-basil pesto. The only also-ran was a filet of Pacific halibut, settled on a well-seasoned hillock of tender black beluga lentils and organic mushrooms: Pearly white and flavorful, the fish was nevertheless somewhat drier than it should have been.

If any type of cuisine cries out for a bottle of good wine, it's bistro cookery, with its handcrafted quality and purity of taste. But hold onto your corkscrew: Although the bistro has a liquor license, a frustrated Mariola says he doesn't expect to receive a wine permit until late November. (And ironically, because of the liquor license, diners are SOL for BYOB.) Dejectedly, we settled for amusing ourselves with pre-dinner cocktails like the fruity Raspberry Spritzer (Sprite and vodka; $4.25) and an astringent Tanqueray & Tonic ($5.50) -- refreshing trifles in their own right, but admittedly poor substitutes for a glass of German Riesling, say, or a Napa Valley Cab.

Mariola and Ollier stay the course when it comes to sweet endings, eschewing sugary confections and instead turning out an ethereal chocolate mousse -- light, creamy, and exquisitely semisweet -- and what may be the ultimate pear and berry crisp, juicy and warm inside a crunchy cornmeal crust, and served beneath a melting scoop of Woo City butter pecan ice cream.

Yes, Wooster is a long way from Cleveland, buried in the heart of the Ohio farmland, surrounded by fields of corn and soybeans, edged in ironwood and goldenrod. In fact, you can probably count on at least a one-hour drive to get there, on narrow country roads that rise and fall like roller-coaster tracks. You might want to get a move on.