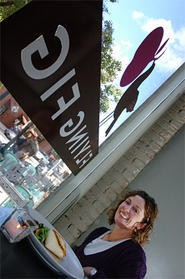 Walter Novak
Karen Small is self-trained. You'd never know by her food.
Even on a Wednesday night, the Flying Fig is rocking, with a bubbly, energetic mix of after-work unwinders, noisy knots of friends, and cuddly young couples indulging in a midweek splurge. Lights are dim, the vibe is festive, and a wailing sax riff rips through the air as diners -- many of them neighborhood regulars -- sip martinis, consult the small but value-laden wine list, and peruse the menu. Adding to the bustle, a cadre of hip-looking servers, many of them replete with the requisite tats, piercings, and burnished domes, glide around the room like a team of T-shirted ninjas -- filling water glasses here, spiriting away an emptied plate there, and contributing a spark of cool everywhere they pass.

It's been eight years since chef Karen Small launched her smart, contemporary Ohio City bistro, and in that time, diners have watched it quietly evolve into one of the region's most popular, successful, and critically acclaimed restaurants. That Small -- one of the region's few female chef-restaurateurs -- has accomplished all this is in itself a wonder, given the always-precarious nature of the biz. That it's been done without the aid of publicists, self-promotion, or even a visit from Tony Bourdain is only further testament to Small's talents -- and the perspicacity of area food fans.

As a self-trained chef and veteran restaurateur, Small doesn't hesitate to spread the credit for her success: a great location, a tenured staff (including sous-chef Nathan Williams and loads-of-fun bar-manager Dave Hridel), and an ongoing commitment to discovering -- and then delivering -- what her customers want.

As a result, her New American menu has become ever more concise over the years, and the preparations increasingly simple. At the end of August, for instance, the ever-changing document included a mere five starters (mussels, calamari, and her famous tempura-battered green beans with curry yogurt sauce and pineapple caramel, recently featured in Food & Wine magazine); five small plates (choose any three, in lieu of a traditional entrée, for a petite $24.50 bonanza of tastes and textures); a trio of seasonal salads; and seven entrées ranging from pancetta-wrapped chicken thighs to a trio of perfectly seared sea scallops, each prettily perched on a dollop of tongue-tingling green-olive tapenade. A handful of daily specials, like an impeccable wild-salmon filet in a crimson ring of beet purée, rounded out the offerings.

"There's been a real maturing in the American palate," the chef says. While diners used to gravitate toward the predictable -- strip steaks, pork chops, and chicken -- today Small "can hardly give those things away. But let me put a lesser-known cut on the menu, like pork short ribs for instance, and my customers are right there with me. They know that the most flavorful cut isn't always the most expensive."

That helps explain, perhaps, the Fig's less-than-astronomical prices: Apps and small plates generally run between $8 and $9; entrées top out at $25; and the popular Tuesday-through-Saturday happy hours feature apps, wine, and select cocktails for only $5 each.

Small has also built a reputation as a leading advocate for locally grown foods, a passion that finds her spending hours each week with area farmers, securing the freshest seasonal foods. During the late summer, that meant a menu filled with ripe Ohio peaches topped with gossamer transparencies of prosciutto; a BLT salad, featuring smoked bacon, baby lettuces, and an assortment of heirloom tomatoes; and dainty pan-seared chicken livers from Loudonville's Tea Hills Organic Farms. "Those kinds of products bring a whole new element to dining," she says.

Yet while Small will tell you that "simplicity" has become her mantra -- "I don't manipulate my ingredients at all any more; I just let their natural goodness shine through" -- her creations are anything but plain. Dishes like the chorizo-stuffed Medjool dates or the seared scallops stuffed with braised beef are practically eye-poppers, thanks to the chef's knack for stacking layer upon layer of sheer flavor into edifices of startling impact.

Other memorable tidbits -- which may or may not be on the menu by the time you read this -- include housemade gnocchi with Killbuck Valley oyster mushrooms and parmesan cheese, and sweet soy-glazed tofu and tender braised chard on coconut-cashew rice. On the dessert menu, hope to find a warm raspberry-peach crisp, almost unbearably dense and jammy beneath a perfect almond-sugar topping, a tiny scoop of lavender-honey ice cream on the side.

All this is brought forth in a warm, urbane space that would look at home in any major metropolis. Subtly lit and done up in shades of russet, mushroom, dill, and toast, the long, narrow room is home to a handsome bar and lounge, a slightly more formal dining room, and a knockout private room with a soaring ceiling. In season, a small outdoor patio takes advantage of tree-lined Market Avenue, where mini-lights twinkle up and down the street.

Also notable is the restaurant's charming new logo, a plump bird holding a voluptuous fig in its beak, above the words "Flying Fig, a small eatery & bar." Developed last year by Lakewood designer Charity Ewanko, the graphic now shows up on the Fig's business cards, T-shirts, and website.

"I wanted something fresh and exciting to complement what we do here," Small says about the change in image -- as if what she puts on the table isn't fun and fresh enough.