After hours on your feet, take a seat for a feast. 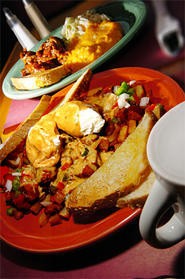 Walter Novak
Market Hash's poached eggs rest on a zesty hash-brown bed.
If there's a better way to work up an appetite than strolling the aisles at Ohio City's venerable West Side Market -- pacing wide-eyed amid a dizzying array of produce, bakery, meats, and spices -- we certainly haven't found it. And judging from the crowd at the equally venerable West Side Market Café during a recent Saturday lunch hour, we aren't the only ones who hanker for the real deal after feasting with our eyes.

Buyers and sellers, porters and clerks, urban pioneers and suburban sightseers -- all were snuggled shoulder-to-shoulder inside this small and cheerful space in the market's southeast corner, eager to assuage their hunger pangs with something from the café's midday menu.

That menu was designed by restaurant vet and café operator Randy Kelly and executed by chefs Jay Shiever and Tim Duchnowski. It's a mostly homey opus, filled with a retro-sounding roundup of simply prepared staples -- burgers, grilled cheese, tuna salad, and fresh walleye among them. Even when the kitchen gets a little jiggy -- with chicken-and-asparagus crêpes, say, or sausage-stuffed mushroom caps -- the offerings still seem to channel an unpretentious, Betty Crocker vibe.

Yet the finished dishes are surprisingly precise. Kelly's pulled pork shoulder is first-rate, slowly smoked over bourbon-soaked hickory and served up tender, lean, and fragrant, in a spicy slather of homemade Jamaican jerk sauce. (Just ask for extra sauce when you order: It's that good.) Rounding out the hearty platter are golden, greasy, yet hopelessly addictive freshly cut fries and crisp homemade coleslaw in a light, mayo-based dressing.

While the café has been around nearly as long as the market itself (closing in on the 100-year mark), it has only hit its stride in the past few years, with a spiffed-up interior, freshly prepped food often from the market's own vendors, and longer, more predictable hours. Kelly and his fiancée, Linda Syrek, took over in November 2005, and they've tried to transform the cafe into a full-service restaurant, open daily regardless of the market's limited schedule: The café now serves breakfast and lunch daily, dinner from Wednesday through Saturday, and a Sunday brunch. Beyond market days' predictable bustle, business also booms during the popular Sunday brunch, when the menu's focus turns to eggs, crêpes, and griddled fare. A mere $2.25 is enough to snag two eggs, toast, and fresh hash browns. Big spenders, on the other hand, can ante up $11 for Eggs Wellington: an eight-ounce center-cut strip steak topped with poached eggs and homemade hollandaise.

Not everything sizzled. A trio of giant buttermilk pancakes, ordered with optional fresh blueberries and sided by a wedge of rosy watermelon and golden hash browns, packed plenty of eye appeal. But the ultra-firm 'cakes were heavy and dry, and a requested upgrade to real maple syrup ($1.50) didn't come through, leaving us with an impossibly viscous artificially flavored syrup. French-roast Colombian-blend coffee from Caruso's Coffee went down smooth and strong. Freshly squeezed OJ was the real deal too, full of bright, tangy citrus notes.

At dinner, the bustle slowed. With the market dark, the workday winding down, and only a few patrons noshing on burgers at the bar, the café air seemed heavy and cold. A good-natured waiter proved friendly but inattentive. Even the Barefoot Contessa, smiling down on us from the telly above the bar, failed to lift our spirits.

No, for spirit-lifting, we turned to booze. Shelved beside the bar is the café's small-but-serviceable international wine collection. With an ever-changing lineup of around 30 labels, retail-priced mostly in the $10 to $15 range, it wasn't hard to find something suitable. And even with the five-buck cork fee, we had no quibble with the prices. (For hops-heads, suds include Warsteiner, Shiner Bock, and Dortmunder Gold on tap, Rolling Rock, Stella Artois, and Bass Ale, among others, in bottles.)

For starters, a platter of mushroom-topped crostini (a special) had its ups and downs: Loved the foresty flavor of the sautéed 'shrooms, sweetened with cream and a touch of sherry; hated the way they immediately soaked through the long, lightly toasted bread spears, making them too soggy to pick up. (Thin rounds of thoroughly crisped bread -- true crostini -- would probably make a better base.)

We weren't overly impressed by the chicken-and-asparagus crêpe either, with its sparse filling -- if there was asparagus in there, we didn't spot it -- and thick, bready wrapper. Then again, the homemade champagne cream sauce drizzled over the crêpe probably could have made our paper napkins taste grand.

Much better than the crêpe was the goat-cheese salad, an ample toss of pristine leaf lettuces, red onion, artichoke hearts, and roasted red pepper strips, topped with a round of imported French chèvre studded with cashews. And then there was that lush pork tenderloin: hot off the grill and wafting woodsy plumes of smoke, settled on a bed of fresh pumpkin gnocchi from Ohio City Pasta, in a fragrant beurre blanc piqued with pineapple sage from the chef's own garden. A special, it's a flavorful, imaginative dish that surely belongs in the regular rotation -- one worth coming out for, even when the market is dark.