South America meets the East Side at the lively Bossa Nova. 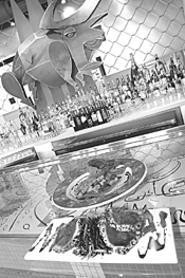 Walter Novak
Toe-tappin' numbers: Ahi tuna (foreground) and beef tenderloin.
What has 400 heads, 800 legs, and sways softly, if a bit unsteadily, to a cool Brazilian beat? If you guessed the crowd at Bossa Nova, Woodmere's stylish new nightspot, grab yourself a martini. In fact, start a tab: It may turn out to be a long but amusing night.

Open since mid-May, the 7,000-square-foot "comfort lounge" in the tony Eton-Chagrin shopping mall is the newest venture for Pittsburgh restaurateur Robin Fernandez and partner, architect Ross Bianco. (Clevelander Michael Herschman, former chef-owner of Mojo in Tremont, was also on board for the early stages of the project's development, but left less than a month after the place opened.)

While its contemporary decor and airy design set Bossa Nova apart from your usual dim, dark-curtained nightclub, the combination tapas bar-martini bar-lounge concept isn't particularly novel. But what does make this place stand out is that, instead of being nestled in the heart of the urban jungle, Bossa Nova sits in the lap of luxury in a high-rent East Side suburb (and, not surprisingly, has the drink prices to go with it). As an obvious consequence of the upscale location, the lounge's targeted audience is the "mature" and moneyed sophisticate, not the roving bands of bachelorettes who haunt some of the Warehouse District's hot spots.

Which is not to say that Bossa Nova is boring or staid. As might be expected from a tapas spot whose logo is a "Guernica"-style bull (a larger-than-life-sized sculpture of said beast forms the focal point of the twisting, 70-seat bar), there is an artful, Spanish-influenced vibe to the space, echoed in the room's groupings of oversized terra-cotta urns, the Cubist-style glass murals, and a stunning collection of nearly three dozen original sketches, doodles, and studies by Picasso, Miró, and Dalí. (Never mind that the real bossa nova is a distinctively Brazilian phenomenon, and that Brazil was settled by Portuguese, not Spanish. This is entertainment, for cryin' out loud, not political science.)

Plush little loveseats and oversized ottomans gather 'round glass-topped cocktail tables in the club's most public areas, while niches, galleries, and alcoves provide more intimacy for romantic tête-à-têtes. But for people-watching -- and Bossa Nova excels in people-watching -- the recommended vantage point is a seat at the bar, where fleet-footed bartenders turn out mean Brazilian-style caipirinhas (a sweet-tart blend of sugarcane liquor, raw sugar, and lime juice), meet special requests with grace, and prove quick to light a lady's cigarette. (Smoking, incidentally, including of cigars, is permitted throughout the facility, but thanks to a well-designed ventilation system, secondhand smoke is seldom troubling.)

From the guy in the mullet sucking on a Bud Lite to the well-coifed fashion plates cradling their Cosmos, the crowd's diversity is striking -- not only in style, but also in age and ethnicity. Sharp-dressed African American businessmen rub elbows with young Asian grad students; a 28-year-old from Akron in shorts and a madras shirt chats with a fiftyish soccer mom from Macedonia. During the Wednesday "girls' night out" rituals (which include the chance to sign up for a limited number of complimentary chair massages and nail-polish changes), silver-haired desperados take one last shot at the skinny, halter-topped blondes young enough to be their granddaughters.

(And then there was the viejo guapa in the ivory silk T-shirt, leaning against a rosy stucco wall just inside the entrance -- tall, tan, and model-lithe, his hands nonchalantly shoved into the pockets of his pleated linen trousers, as he surveyed the room from beneath half-closed eyes and tapped out a Latin rhythm with his Italian-leather loafers. "Do you think that management pays him to stand there and look beautiful?" a smitten companion asked. "Huh?" I rejoined, mindlessly dabbing my drool-covered chin.)

Herschman's original Bossa Nova menu, which he called "a respectful interpretation of traditional tapas," had pronounced Asian tendencies, which have been more or less reined in by current kitchen-manager Paul DeMelto (who worked for Herschman at Mojo for several years) in favor of more Latin-flavored fare. So now, instead of Herschman's crab "egg drop" soup, with quail egg, ikura, and shrimp broth, diners will find a Cuban-style black-bean brew; and in place of Herschman's crispy sea scallops with cucumber-daikon noodles and tobikko, we have sweet roasted Cubanelles, stuffed with potatoes, chorizo, and manchego.

If DeMelto's menu seems somewhat less adventurous than his predecessor's, however, he and his crew nevertheless turn out tasty, well-assembled fare, ranging from such light snacks as the olive sampler, served with pesto, crostini, shaved Romano, battered-and-fried slices of red and green pepper, and a variety of black and green olives to the small but mighty flavorful beef tenderloin, done to order and accompanied by asparagus, truffled potatoes, and a grapey splash of Tempranillo sauce.

The tapas menu is roughly organized from the lightest, least expensive dishes to the ones that are more substantial and expensive, and nearly everything can be categorized as either a snack, a starter, or a miniaturized main course; this makes Bossa Nova as suitable for a pre- or post-dinner cocktail and a nosh as it is for a full meal, assembled from a series of small plates across the course of an evening. If this is your dinner destination, however, plan on ordering three or four items per person and shelling out a total of at least $25 -- pricey $9.50 cocktails not included; sharing, of course, is highly recommended, but isn't likely to trim your tab by much.

Our own party's two-and-a-half-hour menu odyssey began with cool, clean-tasting Canada's Cup oysters on the half-shell, served with a compelling sweet-and-spicy plum sauce; and five moist sautéed shrimp, rubbed with a high-octane blend of cumin and coriander; and finished with a squirt of fresh lime. We then moved on to a sizzling hash of fried chorizo and cumin-and-cilantro-spiked potatoes, topped with a scattering of diced pepper and scallion, and piqued with a bit of truffle oil and balsamic reduction -- fabulous! -- and a trio of crunchy-crusted but delicately flavored salt-cod and potato balls, with lemon-mustard cream sauce for dipping. We concluded with satiny slices of rare ahi tuna, edged in black-and-white sesame seeds and served with sweet pickled ginger, crumbs of Oregon's Pacific Farms' 100-percent-real wasabi paste (no horseradish here), and a stroke of mirin-flavored mustard, for a final sweet and tangy fillip; and a tangle of al dente spaghetti, in a creamy cheese sauce flecked with caramelized onions and perfumed by a fragrant mélange of oyster, shiitake, and portobello mushrooms.

There is a respectable choice of desserts, too: a plump apple crêpe, or -- our preference -- the almost-flourless "cracked" chocolate cake, cut into bite-sized pieces, blanketed beneath an indulgent blend of crème fraîche and whipping cream, and finished with a scattering of diced strawberries.

At one point in Bossa Nova's development, there was talk of including a cocktail or wine recommendation with each food item; unfortunately, that's one good idea that hasn't come to fruition. Of course, with 35 cocktails (including curious combos of Red Bull and bubbly), about four dozen wines by the bottle and half that many by the glass, a handful of liqueur-laced coffees, an upscale beer list, and small collections of single-malt scotch, small-batch bourbons, and sherries, it's a process that conceivably could take all night. (Unless, of course, you do as we saw one couple do, and simply drink Veuve Cliquot all night long.)

Then again, what's the rush? The lights are low, the Latin music is hot, and the guy on the next barstool is looking kinda good beneath the soft blue lights. As long as the credit limit holds and the band keeps playing, this is one carnevale that need never end.