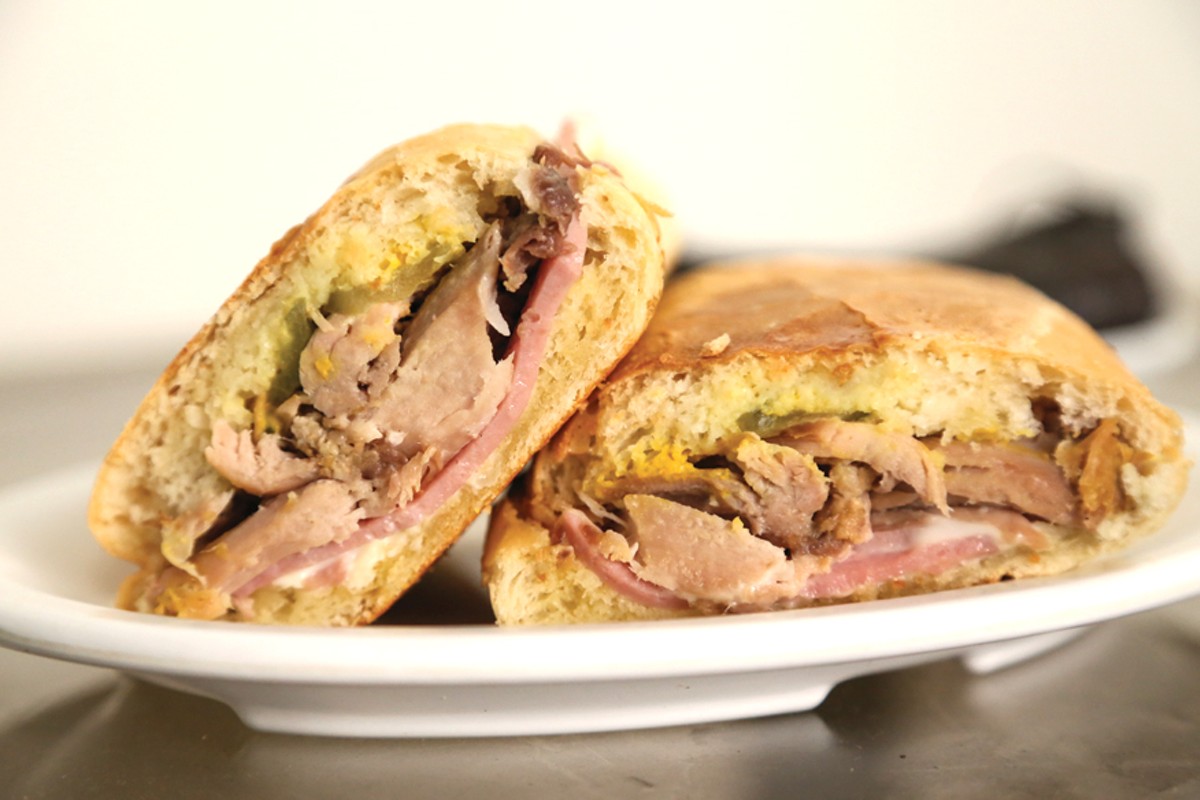 It all started with the bread. Just as you can't make a proper banh mi without a crusty French baguette; a corned beef without fresh, soft rye; or a Maine lobster roll without a pale split-top hot dog bun, you will never achieve Cubano perfection without real Cuban bread.

Caribe on Fulton began life as a bakery, turning out loaves of that crisp-crusted, airy white bread for Puerto Rican home cooks and restaurants on Cleveland's near-westside. Since 1969, this small bake shop in the Clark-Fulton neighborhood has been an invaluable resource not only for fresh breads, but also irresistible sweets like flan, coconut pudding and pastelitos de guayaba, or flaky guava-filled pastries.

Like many of the best spots in town, this one grew slowly, organically, responding to the needs of the community. On weekends, the owners would slow-roast a few fresh hams until they were supple and tender, stuffing heaps of the flavorful meat and crispy skin into that fragrant bread, resulting in the kind of roast pork sandwich that people line up for. And not just homesick Puerto Ricans, but anybody who loves great food and good value. Caribe's Cuban sandwiches are legendary, filled with that same roast pork plus ham, "white cheese," sliced pickles and yellow mustard and pressed until hot, toasty and delicious.

Before long, Caribe had set up an entire cafeteria-style steam table, where customers could walk up and find a whole host of hot foods, which they would pack up to take home or to the job. Sure, there were a handful of seats, but Caribe was the furthest thing from a traditional restaurant. And given the cramped quarters, bottlenecks also were legendary, with bakery customers jostling for space with the prepared foods customers. Something had to give.

"We needed more cooking space and a bigger place for customers, something more suitable," says manager Judith Tecillo, who has worked for the Burgos family business for about 15 years.

Though it took months and months to build, the germ of the idea for a new building began almost seven years back. Rather than just attempt to improve the aged property that already existed, the owners decided to construct an entirely new building immediately next door. When it was completed, they demolished the old and inferior one.

Step into Caribe Bake Shop today and you'll be greeted by a bright, open and modern space. A full 20 feet of hot and cold food stations are filled with Puerto Rican favorites old and new. There's that heavenly roast pork, presented whole and picked apart, order by order, until nothing remains but bone. Meltingly tender dark and white meat chicken, carrots and potatoes luxuriate in a light sauce. Crispy chunks of fried pork meat and skin — chicharron — sit next to a tray of morcilla, pitch-black sausages made with pork blood, rice and onions that have a pronounced metallic taste and creeper heat. The fried chicken comes out in batches throughout the day and happens to be some of the best in town. Mofongo, beef stew, meatballs, corned beef, and even spaghetti make occasional appearances in the steam tables.

Considering the portion sizes, prices are ridiculously reasonable. Made-to-order Cubanos come in three sizes: 8-inch "personal" ($5), 16-inch medium ($8) and the large ($15), which is built on an entire loaf of bread. Most diners order combination plates that include a main dish, white or yellow rice and a choice of beans (black or kidney with pork). Prices for those are $8 to $10.

Regardless of the improvements, diners should not expect a full-service dining experience. This is still an unassuming cafeteria-style operation with limited seating, though an adjacent room has room for more diners. For now, there is no menu — not even labels that indicate what the foods are behind the glass. But that should change soon, says Tecillo.

That would prove invaluable to the scores of people who adore the food, but just don't always know what all the various options are. I, for one, look forward to branching out from my tried-and-true orders.