The Best Things I Ate in Cleveland in 2020 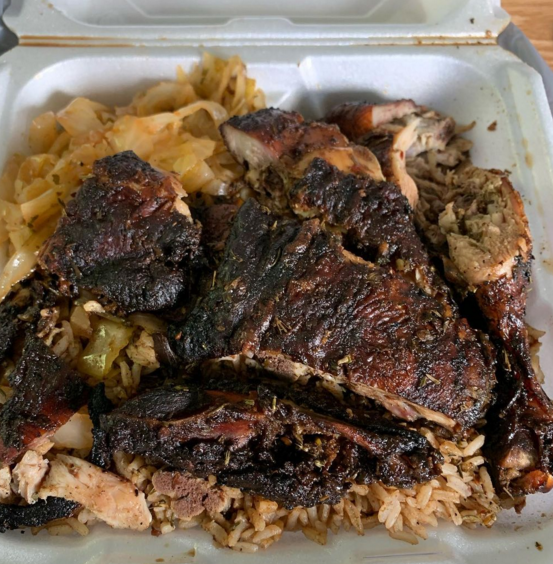 
In terms of the local dining scene, 2020 commenced with a bang. Those first heady months were illuminated with stellar meals at places like Alea, Zhug, Hola and Mojo, bold restaurants that portended a welcome shift from the fast-casual tsunami and towards creative independence. But alas, Covid threw a gigantic spanner in the works, stopping progress in its tracks. Silver linings abound, however, in the form of plucky upstarts like Proof, Home Bistro, Half Moon Bakery and Leavened, businesses that managed to bloom during the darkest of days.

At Doug Katz’s dreamy Middle Eastern meeting place, hummus is used as a backdrop for various dishes, but none managed to captivate diners – including this one – like the curried lamb. The interplay of warmly spiced braised lamb set against the silky, nutty spread is straight culinary witchcraft. Scoop that magic up with bits of plush clay bread, top it with the namesake electric-green zhug, and you’ll be placed under a perpetual spell.

For a demonstration on the transformative powers of real-fire cooking, reserve a table at tiny Alea in Ohio City. In place of the typical backbar of booze bottles sits a wood-burning cooking suite that fills the room with the irresistible charm of a backwoods chalet. Chef-owner Athan Zarnas leans on wood as though it’s a spice, imbuing a corpulent heritage-breed pork chop with an intoxicating scent while branding the exterior with a seductive char. The juicy-pink chop is nestled into a pool of silky celery root puree and garnished with mouthwatering roasted grapes.

Few restaurants had to endure more hardships to reach opening day than Proof, the barbecue joint that shares the same Tremont building as Visible Voice Books and Crust Pizza. From the untimely passing of its consulting chef to months of Covid delays, the persevering business finally debuted in May. From a trusty Southern Pride emerge wood-smoked brisket, pulled pork, pork belly and chicken. That 14-hour brisket gets folded into tortillas to become some of the tastiest Texas-style tacos in town.

Bulgogi and Spaetzle at Home Bistro

At first blush, a dish called bulgogi and spaetzle sounds like a convoluted mash-up dreamt up by a stoner in the import aisle. But this concoction, crafted by chef-owner Victor Morenz at Home Bistro in Little Italy, fires on all cylinders. Thin-sliced beef is tossed with tender dumplings, coating them in that sweet/savory bulgogi sauce. Bright pops of punchy kimchi light up every other bite, while a sunny, runny fried egg enriches it all.

When Juan Vergara announced his plans to unveil a new taco shop, the disingenuous groans reverberated across the land. But those keens quickly quieted after he rolled up the windows of his "L.A.-style taco stand” in the Birdtown neighborhood of Lakewood. Hola, now with additional locations, succeeds thanks to stellar meats like wood-fired carne asada and spit-roasted al pastor. But it’s the birria tacos starring slow-braised beef that weaken the knees. The tacos are seared on the griddle in rich broth and paired with hot consommé for dipping.

Empanadas at Half Moon Bakery

From a small Puerto Rican bakery in the shadow of MetroHealth come some of the crispiest, most delicious empanadas around. The bakery is run by Gerson Velasquez and Lyz Otero, who have worked in some of Cleveland’s loftiest restaurant kitchens. The result is a selection of flaky Argentinian empanadas and corn-scented Columbian empanadas, all stuffed with savory fillings like seasoned ground beef, shredded chicken or mixed veggies. The zippy aji, a spicy green chutney, is indispensable. 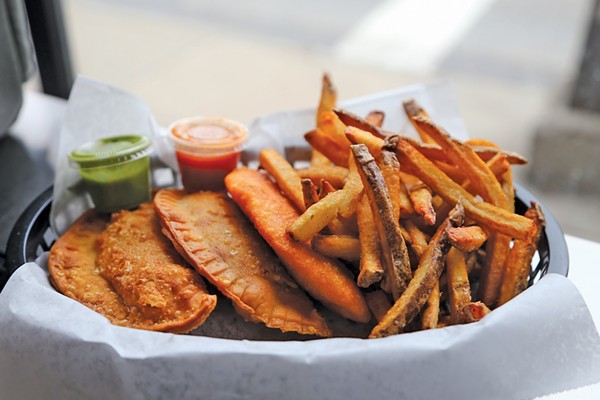 As with tacos, burgers and barbecue, most folks think there’s nothing new under the sun to discover. But discovery is precisely what awaits at Roman Café, the new E. Fourth Street pizzeria from Citizen Pie impresario Vytauras Sasnauskas. From all outward appearances, the rectangular slices look like standard-issue Sicilian, but this is Roman-style pizza, which translates to light, airy and crackly-crisp crusts crowned with a rainbow of meat and veggie toppings. The grab-and-go process is well suited to the current dining environment, but also the inevitable return of harried lunchbreaks.

Daniel Ang progressed from a food truck of the same name to a brick-and-mortar restaurant in Lakewood only slightly roomier. There, he lovingly prepares a small roster of dishes culled from his childhood in Singapore, where he devoured foods rooted in Chinese, Indian and Malay traditions. When you visit, do try the curry noodle soup and braised pork belly rice, but if you want to experience Spam in its highest form, tack on an order of the musubi. Slices of the sweet-salty canned ham are sauteed, painted with teriyaki, sandwiched between steamed rice and bundled up in a tidy seaweed wrapper. 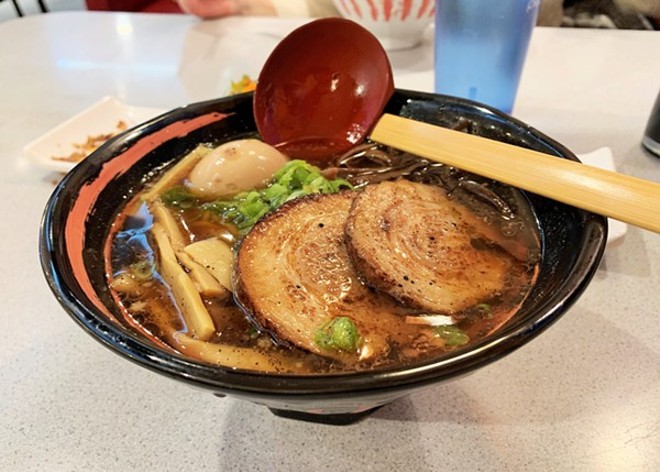 Thanks to social media, I was persuaded to travel to Willoughby in search of ramen. What I encountered when I landed were some of the best bowls in Northeast Ohio. The Japanese eatery offers a wide array of sushi, hibachi and stir-fries, but the ramen options are exemplary. Choices include a classic pork tonkotsu, kuro ramen with squid ink, Hokkaido-style yellow ramen, soy-based shoyu ramen and broth-less mazemen ramen. The tonkotsu arrives characteristically milky, with a rich, savory broth made from long-simmering bones. In the bowl are bouncy noodles, thick wheels of chashu, tender braised pork belly and a soft-cooked egg. Order it as spicy as you dare.

If I had a nickel for every time I passed by this unassuming Caribbean eatery without hitting the brakes, I could buy a small island of my own. When I did finally stop at this Warrensville Heights take-out shop, I surveyed a couple regulars for suggestions. The near-unanimous reply was: jerk chicken, extra-spicy. Unlike many of its brethren, where foods are plucked from a nearby steam table, Island wrangles the bird straight off the grill before dousing it in incendiary sauces. Paired with warm cabbage and rice and beans, the dish serves as a reminder that culinary delight can lurk in every nook and corner.

Sometimes comfort arrives in the most unexpected of places. Upon arriving at Yemen Gate on Cleveland’s west side, I was immersed in the sights, smells and sounds of a faraway land. The aromas of fresh-baked bread, exotic spices, savory stews and grilled meats hung in the air. While we enjoyed slow-braised lamb haneeth, orange-hued chicken mandi and charcoal-grilled chicken – all served atop buttery long-grained rice – it was the cauldron of bubbling fahsa that will lure me back. The heavenly spiced lamb stew is served with rashoush, a tire-size flat bread that arrives blistered and puffy from the hot tannour oven.

If there’s a bright side to 2020, it was the rise of quirky, nonconventional startups that aim to disrupt the status quo if only to survive these atypical times. One such arrival is Corner Spot, a ghost pizzeria that operates in a church and accepts new customers through Instagram. These thick, rectangular pies are designed from the dough up for the delivery (here, pick-up) age. They are fully baked, but not hot, requiring a few minutes in a hot oven to achieve their intended outcome, namely sharp edges, singed-cheese corners and crusty bottoms. The subtly flavored Spuddy Rich is layered with thin-sliced potatoes, sweet melted onions, garlic confit and rosemary cream.

For a chef who ran a 20-year-old restaurant, Doug Katz rose remarkably quick to the challenges presented by Covid. This summer, he converted a kitchen typically bursting with catering gigs to Chimi, a South American-inspired ghost restaurant. A lack of a dining room doesn’t stand in the way of a great meal thanks to vibrant dishes like peanut salsa and chips and jackfruit tamales. In the shrimp Veracruz, plump seafood shine in an earthy stew of tomatoes, olives, capers, nuts and mint. Swaddle it in warm white corn tortillas, hit it with the namesake chimichurri and savor a taste of the Tropics.

When chef Michael Herschman announced his plans to revive Mojo, the pioneering small-plate restaurant he launched decades ago in Tremont, I was thrilled. So thrilled that the restaurant was the first I visited after the return of outdoor dining. Like the original, this revival offers a dizzying selection of small, medium and large plates, each more tantalizing than the last. The chef’s rightfully famous calamari is here, as are classics like fried tofu and curry beef noodles. No bowl packed more of a punch, however, than the one layered with fried boneless chicken thighs, housemade kim chi, smoky-sweet kabayaki glaze and a runny fried egg.

It’s a truism to state that all great sandwiches start with great bread. That’s why bakeries like Leavened, which opened this fall in Tremont, have a leg up on the market. Ian Herrington and his team don’t offer many sandwiches, but when the Italian makes an appearance the supply does not last long. Built on horizontally sliced focaccia, the weighty sandwich is stuffed with pepperoni, salami, ham, provolone, tomato and mild but crunchy giardiniera.