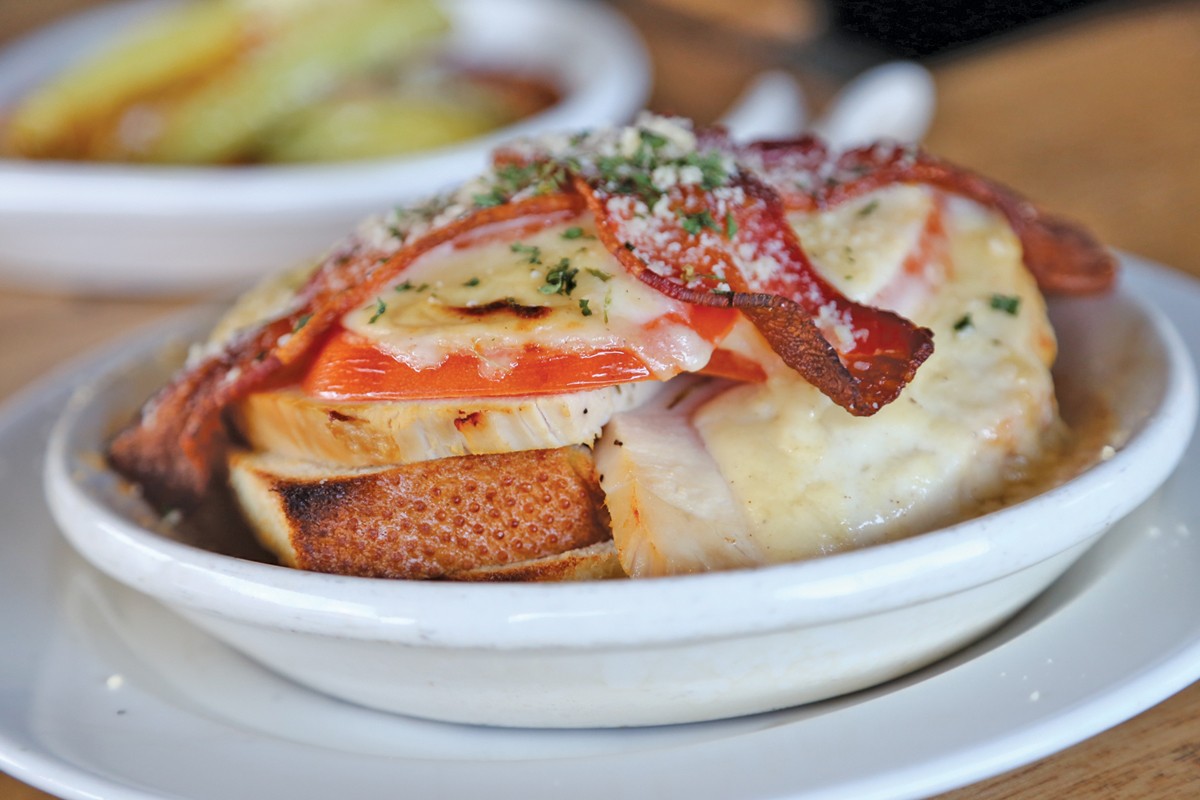 It's truly astonishing what a little light can do. For as long as anybody can recall, the tavern at the corner of Lee and Kensington roads in Cleveland Heights has been a dim cavern owing to windows that long ago were sealed up tighter than Al Capone's vault. By installing a wall of new glass along the southern expanse, the owners of the Kensington Pub have done more than simply flood the room with natural light; they've filled it with optimism.

For nearly three years, the space formerly known as the Tavern Company has been closed, a conspicuous missing tooth along the neighborhood's prime restaurant row. Partners Jeff King and Brad Poe seized on the opportunity to not only rescue the iconic spot, but to improve and refine it in ways they believe local diners desire. Of course, along with the keys to such a prominent spot comes the pressure to make good use of what many see as an extension of their living rooms.

The windows might be the most visible improvement, but management didn't stop there. Nearly every surface got the once-over, from the floors to the ceiling to the walls to the tabletops. Fortunately, the owners stopped short of completely expunging the personality of the well-worn tavern, with the mile-long wooden bar and backbar possessing every bit of handsome charm it always has. That bar is, once again, one of the best spots for friends to meet up over beers and baseball, and those beers exit clean lines and shiny taps. Fresh wines by the glass, a unicorn at corner pubs, include a French rose, German riesling, Italian Chianti and California cabernet, along with a dozen or so other options.

I'll admit that walking into the old TavCo and bumping into a host stand was more than a little jarring. The move is just one of a handful of small gestures aimed to bring a touch of old-tavern class into the mix, moves borrowed from the owners' many combined years working the dining rooms of haunts like Johnny's. Servers don crisp white shirts and ties while hoisting laden-down serving trays. A flip of the wrist and a tray stand opens alongside the table, a slightly more elegant maneuver than shuttling stacked plates by hand.

Fear not, pub fans, Kensington isn't fine-dining — or even finer-dining for that matter. You can still enjoy a burger and fries at the bar in your work clothes, even if your day job is mowing lawns. But you can also, if the mood strikes, tuck into a thick steak and wash it down with a plummy Nickel & Nickel cabernet from the Napa Valley. That burger, available in four different builds, is beefy, juicy and easy to enjoy thanks to a buttery brioche bun. Order the Sweet & Smoky ($13.50) and you'll net a burger topped with sweet caramelized onions and smoked Swiss cheese. Thick, crisp fries are included in the deal.

Order the strip steak au poivre ($25) and you'll be rewarded with a nicely trimmed 12-ounce chop wearing a coarse and crunchy peppercorn jacket and gilded with a silky cognac cream sauce. From the expertly charred exterior to the warm medium-rare heart, the steak is steakhouse good. The stark white platter also is steakhouse-bare save for the sprigs of fresh thyme. Three other chop presentations are on offer, as is a double-bone pork chop and roasted lamb shank. Intrigued, we ordered the hot brown casserole ($16), the pub's take on the classic Southern comfort food. Starring good-quality, thick-cut roasted turkey, bread, bacon and bubbling cheese sauce, the dish is comforting indeed.

Once you get past the burgers, steaks and chops, the landscape narrows to salads, a handful of sandwiches and a pair of mac-and-cheese dishes. Breaded pork schnitzel sammies appear to be having a moment and the one served here ($13) is ideal. Tucked into a soft bun, the breaded-and-fried cutlet is topped with slaw and slathered with spicy mayo. Other sandwiches star corned beef and that great house-roasted turkey breast.

An odd jumble of apps includes plump beer-steamed mussels ($13.50) served with golden brown toast points; sausage-stuffed, cheese-capped banana peppers ($12) in chunky marinara; and a tasty skewer-free corndog ($8) sporting an aromatic cornbread coating. Night owls can knock back that corndog along with a cold beer clear up until 2 a.m. every day of the week.

Despite the new management, new name, new look and new menu, Kensington Pub feels like an old friend who just moved back to town. After a few awkward moments, you pick up right where you left off.