The tiny kitchen at little Touch Supper Club, in Ohio City, is turning out big flavors 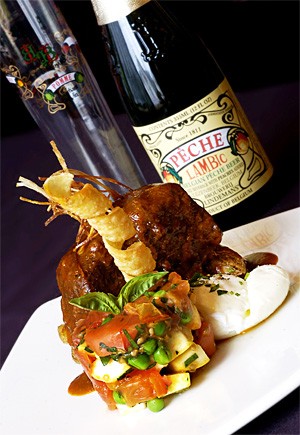 When we last caught up with Jeff Fisher in late 2007, the chef was still feeling high from his recent stint at Chicago's Charlie Trotter's, the Lincoln Park boîte that holds a perennial space on the short list of America's best restaurants. The weeklong stage both tired him and delighted him. More important, it inspired him to carve out his own little niche, filled with charm, graciousness, and first-rate food.

Ohio City is no Lincoln Park. And Touch Supper Club, where Fisher now hangs his toque, is surely no Charlie Trotter's. But that doesn't mean his inspiration has gone to waste: For quality, value, and charm, this little restaurant, bar, and dance club may be the best surprise in town.

It's a surprise because Touch's commitment to first-rate dining has been a hit-or-miss affair throughout its eight-year history. Things looked up in 2005, when club vet Rob Ivanov bought the biz. Unfortunately, his opening chef took off in mid-2006, leaving dinner service in the hands of a revolving crew. Ivanov's luck finally changed last summer, when his pal Fisher left a post in Tremont. "The minute I heard Jeff was no longer at Lago, I called him stat!" Ivanov says. "He's the missing piece of my restaurant puzzle."

Fresh flowers, modern art, and warm, attentive servers give the room unexpected panache. Equally charming is the complimentary, pre-appetizer amuse-bouche, perhaps something like homemade hummus on a crunchy toast point. And post-entrées, there's the intermezzo: a shooter of fruit-studded seltzer, maybe, or a bit of sour-cream sorbet in a tangy berry broth.

Those twice-fried frites are killer, whether as a stand-alone nosh or a side for the heart-stopping burger, which comes topped with crisped coppa (dry-cured pork loin), a glistening fried egg, and a slather of "secret" sauce. They also accompany the tender steamed mussels, balancing briefly atop the jumbo bivalves before tumbling down into the savory broth, an almost effervescent blend of Delirium Tremens, bacon, and garlic.

Fisher also explores the nexus of savory and sweet, particularly in starters like the butternut-squash turnover, a palate-pleasing twofer of frangible puff pastry and caramelized veggies, finished with a Christmas Ale reduction. It's the same with the ample spring roll, stuffed with duck confit, goat cheese, and sun-dried blueberries, drizzled with blueberry Frangelico sauce, and garnished with an Asian-pear-and-pomegranate salad.

The warm mushroom salad also balanced sweetness and dark, with a mingling of earthy fungi and chewy sun-dried cranberries, anchored by a fragrant parmesan-basil dressing. But even a sweet tooth might ache after the housemade ravioli, plumped with a too-sweet filling of butternut squash, then dabbed with sweet Frangelico sauce and a touch of browned butter.

Fortunately, savor was back with the succulent braised short ribs; on the side, a creamy poached egg melded with the pan juices into a sort of à la minute sauce. Nearly as robust, the thickly sliced pork loin with bourbon-spiked apples and onions, and the mac & cheese — a brimming bowlful of al dente pasta, smoky tasso, and baby green peas, shellacked with a silken sauce of Vermont cheddar, creamy Port Salut, and zesty Cotswold, piqued with minced onion and chives.

If the big flavors generally impressed us, so did the tiny prices. Combined with first-rate service and urbane amenities, they made it easy to overlook the occasional rough patch — the fibrous asparagus in a vegetable medley, say, or the fact that food came out of the kitchen at a more-than-leisurely pace. (A word of advice: Take interesting companions.)

And while we're bitching, we'll mention the dingy unisex restroom. If Ivanov is serious about promoting Touch as a first-rate supper club, he needs to upgrade that college-bar restroom. A new door would be a great start.

For sweet endings, both the nontraditional take on bananas Foster — with berries and a puff-pastry raft joining the usual ice cream, caramel, and buttery sautéed 'nanas — and the mellow molten-chocolate cake, enhanced by scoops of homemade ice cream, are well worth the calories.

And by all means, order cappuccino. Smooth, intense, and topped with a heavy crema, it's probably the best restaurant coffee we've ever had.

Sip on that, Chicago.