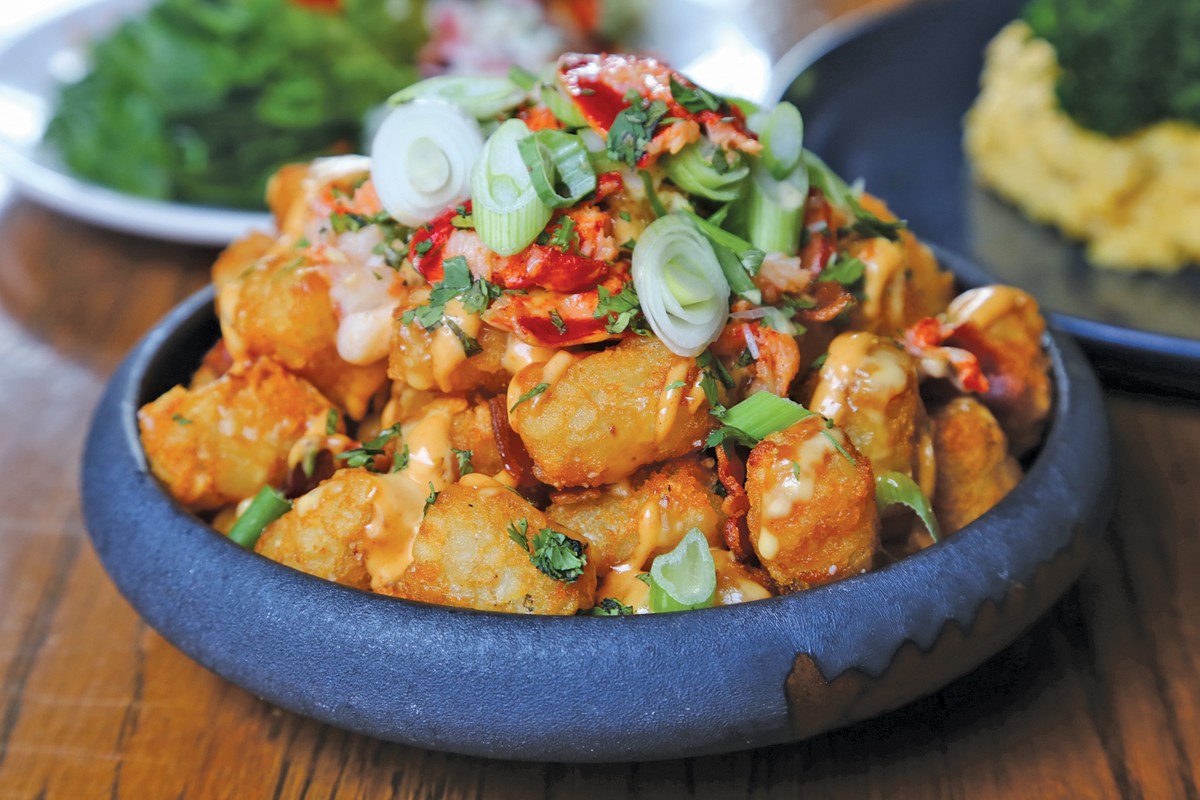 By the time you get off work and make your way to Thyme Table in Bay Village, the “Bay Moms,” as one staffer affectionately called them, have been merrily sipping white wine at the bar for at least an hour. Stroll in at the uncivilized hour of 6 p.m. and already the dining room is full, with many tables well into their main courses. Who eats dinner this early?

Since opening at the tail end of April, the modestly proportioned bistro has been at the top of the dance card for many residents of this placid lakeside suburb. Chef-owner Michael Smith appears to have captured the curiosity and support of the community with his spiffed-up tavern concept, where the menu trades ambitious for approachable at nearly every turn. Thyme Table is the opposite of a special-occasion restaurant, but that doesn't mean there is nothing special about the place.

Years of working in the customer-facing catering business has given Smith a knack for devising eye-catching dishes like chicken-fried oysters, lobster-topped tots and beer-braised short ribs with cheddar grits. And given his decade of experience satisfying client whims of every stripe, it's also not surprising to see subtle nods to Italian, Greek, Korean and Middle Eastern cuisines sprinkled throughout.

To kick off your meal with a literal flash, order the flaming cheese ($14), a showy starter that involves some pyrotechnics. After the cheese is set ablaze tableside, it is paired with a platter of pita wedges, stuffed grape leaves, tabbouleh and hummus. The grape leaves are firm and lemony, the tabbouleh herby and bright, and the hummus nutty and pleasantly spiced. Those decadent tater tots ($12) arrive hot and crispy beneath a crown of sweet lobster meat. Bacon, scallions and a judicious gilding of cheesy sauce elevate the ubiquitous pub snack into an extravagant treat.

Smith and company nail the fried oysters ($12), dark and craggy on the outside, plump, molten and briny within. There's remoulade for dunking and a refreshing shaved fennel slaw as a chaser. There is almost nothing pretzel-like about the pretzels ($7) save for the dusting of coarse salt. While freshly baked, savory and delicious, especially when dipped into the beer cheese and grainy mustard, these round rolls lack that characteristic sheen and shell of a true pretzel.

I'm pretty sure that if the person who selected the perfectly flat, rimless side plates was also the one tasked with wiping down tables between guests, they likely would reconsider their purchase. From scallions to tots to roly-poly pretzels, everything tumbled right off the edge. We did appreciate the tabletop carafes of clean, cold water to top off our glasses as the need arose.

As the crowds confirm, there's no shame in dishing up chestnuts like fried chicken sammies, peppercorn-crusted tuna and braised beef short ribs, even as spring approaches summer. But do so and you invite scrutiny. That otherwise appealing egg-topped fried chicken sandwich ($13) was torpedoed by a biscuit bun so thick and dense it was inedible. An elegantly trimmed and patiently braised short rib ($24) arrived lean, supple and pot roasty. But you could cut the accompanying cheddar grits like cornbread they were so stiff and set. The less said about the falafel ($17), the better, a dish that perverts the paradigm in every way, shape and form.

In the plus column are nearly perfect salads like the gem wedge ($7), which swaps pale iceberg for buttery gem and crimson oak lettuces and dresses them with bacon, cherry tomatoes, pickled red onion and a creamy blue cheese dressing good enough to bottle. Pasta ($19), made black as night thanks to an infusion of vegetable ash, is satisfyingly al dente. It is tossed with beautiful shrimp and springy peas in a light pesto-enriched cream sauce.

In a small, trendy place like Thyme Table, where a first-come, first-served system translates into consistent waits for a table, the bar is often a diner's best friend. The 14-seat stick here is indeed a saving grace for solos and couples, but the stools come at a price. Our bartender was great with cocktails, beer and wines by the glass and bottle, but she could not list the contents of the meat and cheese board, erroneously described the chicken sandwich as white meat, and when asked about the differences between the short rib appetizer and short rib main course, said of the former, "It's smaller with different stuff on top."

Management did a great job reworking the former 583 Bistro into a snappy little space with forest green walls, tin ceilings, copper accents and on-trend lighting, but if you think restaurants have become too loud, you might want to avoid Thyme Table when that bar gets rolling.