Was The New York Spaghetti House ever as good as we remember it? 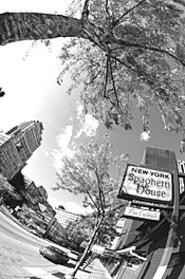 Walter Novak
Nostalgia alert: A local landmark is back in business.
At Gateway's New York Spaghetti House, the pasta is seasoned with nostalgia and served with a side of misty-eyed remembrances -- an emotional MSG, with the power to transform even mediocrity into a peak experience.

How else to explain the rapt look on the faces of diners as they gobble down heaping platters of flaccid spaghetti topped with undistinguished sauces? It's not food, after all, that they are devouring; it is memory and myth, and maybe even the unspoken hope that, as with the restaurant itself, former glory days can somehow be revived.

Originally opened by Mario Brigotti in 1927 (and closed by his son, Jim, in 2001), the New York Spaghetti House, along with spots like Mills, Clark's, and the Silver Grille, carved out a special niche in the hearts of Greater Clevelanders. Its narrow downstairs dining room and the legion of solemn, slightly supercilious Italian waiters (who remembered every order without writing down a word) could have come straight out of a Damon Runyon tale, and at least in those innocent days preceding Our Great Culinary Awakening, the fare -- ravioli! beef tenderloin funghetto! veal cutlet Milanese! -- seemed worldly and exotic.

As a result, for generations of diners, the New York Spaghetti House was the place to celebrate life's passages, from first dates to wedding anniversaries and from new jobs to a seat on the board. So sure, when the place finally shut down, fans said they were grieving the loss of the restaurant's marinara and its famous "brown sauce" -- but what they really mourned was the loss of yet another cultural touchstone in a town that had already lost so many.

But now look at those once-long faces! Since it reopened in June, with new owners (the Frangos Group) and the original sauce recipes, the joint has been flooded with happy diners who drop in for impromptu after-work dinners, grab a table before a game or concert at the Gund, or just stop by for the gustatory equivalent of a stroll down Memory Lane. As they follow the hostess down the short stairway and into the downstairs dining room, their eyes light up like kids' on Christmas morning. "I used to come here for lunch once a week," a retiree recalls. "My parents always brought me here for a good report card," a mother whispers to her daughters.

That these memories come rushing forth so easily is a testament to how little the interior has changed since the new owners took the helm. Mellow oak paneling and those pastel frescos of Italian piazzas and palaces still cloak the walls, red-checkered cloths still drape each tabletop, and the air still shimmers with the aromas of garlic and tomato.

Of course, the old Italian waiters are gone, replaced by young men and women who tote little memo pads to record the orders. As a result, while service is undoubtedly more welcoming, it is considerably less refined. (A young waiter at another table was overheard apologizing for the dining room's swarm of gnats: "Yeah, we've got a bug problem; they have traps all over the kitchen to catch 'em.") Still, the culinary team, headed by executive chef and Spaghetti House veteran Rubin Hart, seems to operate smoothly, and gnat-free dishes come forth from the kitchen with admirable regularity.

Of course, the question on everybody's lips is "Is the food as good as ever?" Here, we are of two minds. By 2004 standards, the small menu -- four apps, four salads, three soups, and such tired old workhorses as chicken Parmesan, veal Marsala, lasagna, and fettuccini Alfredo -- is uninspired. Flavors, while wholesome, are unoriginal and generally understated. And while we appreciated the use of fresh parsley as a garnish, it must be said that the grated cheese tasted packaged, the Italian bread was grocery-store quality, and the pastas -- whether penne, lasagna noodles, thick spaghetti, or fresh fettuccini -- were uniformly overcooked.

As for the "famous brown sauce" -- a thick concoction of tomato, ground meat, and, we suspect, flour -- it seemed to us as sweet and bland as ever. In fact, our dining companion, an out-of-towner who had never fallen under the original brown-sauce spell, was greatly unimpressed: It took three shakes of salt, two spoonfuls of grated cheese, and a sprinkling of red-pepper flakes before he felt the stuff merited even the slightest attention.

On the other hand, it seems likely that the food here has always been thus. After all, when boomers recall childhood trips to the New York Spaghetti House, they aren't remembering wild-boar sausage, veal chops, or polenta. Their fond memories very likely are built around dishes that were comforting, homey, and entirely unpretentious. So we have to guess that the food is probably pretty much the same as ever.

Among starters, for instance, we found little that was memorable, but nothing that was unpleasant. An à la carte house salad, for example, was a simple composition of tender lettuces, mild vinaigrette, some grated mozzarella, and a pepperoncini. Pasta e fagioli tasted vaguely sweet and rather savory -- although it could have used more of both pasta and beans; and while the fried calamari had both tough and tender bits, the accompanying marinara (which we prefer emphatically to the brown sauce) was so sassy that we ate it with a spoon. The best of the lot, though, turned out to be the quartered artichoke hearts "Franchese," dusted with flour, lightly fried, and finished with a lip-smackin' lemon-butter sauce that highlighted the slight tartness of the canned but tender 'chokes.

Main courses were similarly predictable. No surprises, for instance, in the breaded veal Parmigiana, a large, toothsome cutlet smothered with melted cheese and served with a side of marinara-topped pasta. Other than the flabby noodles, we had no complaints, either, about the fettuccini Alfredo, with its garlicky sauce of cream, butter, and cheese. But for actual oomph, the meaty lasagna was the closest contender. Layers of zesty pepperoni, garlicky ground beef, and the sweet-tart marinara, along with mozzarella, ricotta, and Parmesan cheeses, infused the dish with rich, salty, and almost spicy flavors.

To drink, general manager Anthony Esquival (former co-owner of the now-defunct Curcio's, in Lakewood) has put together a small, properly unassuming list of value-priced wines from California, Italy, and Australia. Our choice was the smooth, well-structured, and slightly peppery Rancho Zabaco Dancing Bull Zinfandel (California); the wine retails at our local Giant Eagle for $12 and was well priced on the wine list at $18.

Dessert offerings include spumoni, cannoli, huge slabs of very sweet tiramisu, and substantial wedges of fluffy textured cheesecake. Alternatively, smooth cappuccino, with a foamy head of steamed milk flecked with cinnamon, made a fitting final taste, although the coffee could have been hotter.

Not that we expect any such flaws, shortcomings, or oversights to dim fans' enthusiasm. After all, today's Clevelanders have dozens of spots they can visit for stylish digs and cutting-edge cuisine. But for a taste of times gone by, there is no place that compares to the New York Spaghetti House. 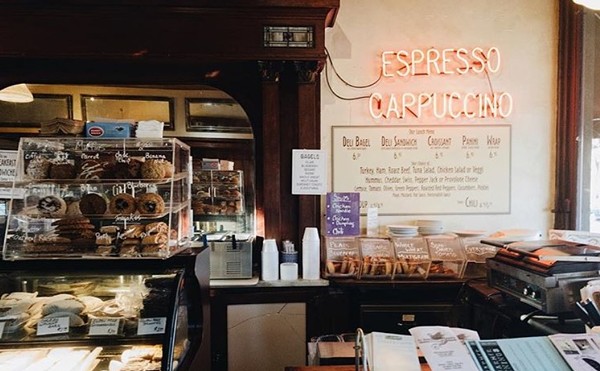