What Are You Waiting For?

Yes, Sterle's Has Been Around Forever, But You Should Stop Putting Off A Visit 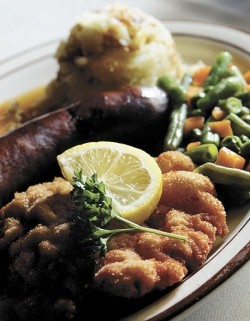 Wallet-friendly restaurants are sitting in a much more enviable position than posh-and-pricey vanity projects. Like $5 mocha fraps and twice-monthly manicures, costly dinners are disappearing faster than you can say "Happy Meal." And the sad truth is, many fine restaurants will close their doors within the next six months.

Frank Sterle's Slovenian Country House will not be one of them. To cross the 50-year mark, as this institution soon will, you gotta be doing something right. At Sterle's, that something is filling bellies with tasty vittles for a good price. On weekends, the ante is upped with free music and dancing.

What started out as a modest neighborhood tavern in 1960 has ballooned into the city's largest ethnic restaurant. There are private party rooms at Sterle's that dwarf the average bistro. Fully committed, the Central European polka palace can accommodate around 400 guests.

Arranged like a Bavarian beer hall, the cavernous space is festooned with bucolic hand-painted murals, old-world family crests and a frat house's share of beer signs. Brawny hand-hewn beams serve as the tent poles of this big top, while a snug little bar seems to disappear at the far end of the yawning room.

When it comes to the food, comparisons can and will be made to Sokolowski's University Inn in Tremont. While both restaurants specialize in European soul food at honest prices, the obvious distinction is that Sokolowski's is Polish and Sterle's is Slovenian. In reality, both restaurants appropriate foods from well beyond their respective ancestral borders. Case in point: Sokolowski's serves crab cakes, Sterle's offers a western omelet. Who the hell orders either is anybody's guess.

Another difference is the approach. Diners at Sokolowski's work their way down a lengthy cafeteria line, selecting pre-made items from a steam table. At Sterle's, you sit, you eat, you enjoy - just like at Grandma's. And like at Grandma's, you invariably eat too much. Food here is served in such large portions that it arrives not by hoisted tray but via four-wheeled dolly.

The most popular way to chow down is family-style. For $17.95 per person, each guest is blitzed with soup, salad, bread (with real butter), Wiener schnitzel, roast pork, smoked kielbasa, sauerkraut … deep breath … potatoes, veggies, coffee and dessert. The only decision to make is what flavor beer to wash it all down. Even there, diners find a bargain, with cans of domestic going for $2.50 and pitchers of German Warsteiner for $10. Presented in a stainless tureen, the chicken noodle soup is overloaded with thin egg noodles. Bland but soothing, the soup doesn't last long in this weather. You can take your pick of salad dressings, but for my money, the crisp iceberg, cabbage and carrot combo demands the straightforward vinaigrette.

This joint has been peddling pork since folks like Michael Symon and Mario Batali were crawling in circles, and our juicy roast pork loin, while far from glamorous, is undeniably delicious. The thick-sliced meat is gilded with thick country gravy. We also slather on heaps of the kicky white horseradish, but are forced to reserve some for the kielbasa (especially since our server neglected to wheel over the included sauerkraut). Bursting with smoke and spice and everything nice, the Polish pork sausage is a festive holiday treat.

I think often about Sterle's Wiener schnitzel. Beneath a blistered, mahogany-colored breading lies an appropriately thin and tender slab of trampled veal. No tricks, no adornments. But why stop there? Go rogue (i.e. ditch the family-style) and try the Sterle schnitzel ($15.95), a mountain of breaded veal beneath a sea of creamy mushroom gravy. If you find yourself in the area around lunchtime, pick up a schnitzel sandwich for $6.95.

Sterle's mashed potatoes are unlike any found elsewhere. Called home fries here, they fall somewhere between hash browns and smashed spuds. They are difficult to describe; go taste for yourself. The tinned vegetables, on the other hand, warrant no such special trip.

Dinner ends - finally - with a pot of strong coffee and some nice apple strudel.

Just because Sterle's has been here forever doesn't mean it will be here forever. Folks who for years put off a visit to the storied Hofbrau Haus, Sterle's neighbor for over four decades, learned that fact when the restaurant closed and was subsequently razed. Some nights at Sterle's are as merry as a Frankie Yankovic concert. But others are as quiet as Lilith Fair.

Frank Sterle died 23 years ago. How long are you going to wait?