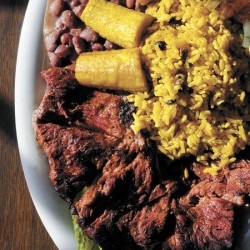 Many readers of this column might never consider visiting La Brasa. In addition to residing in a sort of no man's land between Detroit Shoreway and Brooklyn, the place just isn't very inviting. Propped out on the sidewalk is a hastily scribbled sign announcing that the joint is open. That's important, because the accordion bars covering the windows and doors might lead diners to think otherwise. And if you aren't bilingual, you might have difficulty with another sign listing the days and hours of operation - in Spanish.

But poke your nose inside, as I tentatively did a few weeks back, and you might catch whiff of a beautiful scent. "La brasa" is Spanish for "glowing coal," and the name refers to the cooking method of choice at this new Central American eatery. The centerpiece of the open kitchen is a squat brick charcoal grill (yes, indoors), suspended over which is a special grate designed to cradle split chickens. With a simple flick of the cook's wrist, the entire frame pivots, flipping a dozen or so roasted birds at once.

Now, let me try to explain how good that chicken tastes. After plowing through a half-bird at lunch one afternoon, I ordered a whole chicken to go for dinner. When I returned for lunch a week or so later, it was all I could do to not order another one. Will I be back for more? You better believe I will.

La Brasa is a lot like La Tortilla Feliz was when it opened in Tremont a dozen years ago. Central American staples like pupusas, tamales, empanadas, grilled meats and simple stews are prepared from scratch and served up in a small, clean, spare space. Prices could not be cheaper, and portions could rationally be no larger. For instance, a half-chicken, hacked into six pieces and served with a mountain of rice and beans, costs $8. A cut-up whole chicken to go without sides is just $10. For smaller appetites there is a two-piece meal with sides for $5.

Unlike the sign in the window, the menu could not be simpler to comprehend. A large board contains pictures and brief descriptions of most items (though it does lack prices). In addition to the chicken, there are large platters built around grilled sirloin, stewed beef and pan-fried fish. Each contains two sides, some combination of white rice, yellow rice, beans and French fries. Orders are placed at the counter; the food is delivered to you at one of five tables.

I hesitate to call items such as empanadas, tamales and pupusas "starters," because there is no telling when they will land on your table. During one meal, my wife's entrée came first, followed a few minutes later by one appetizer, then another, and finally my main dish. Items come out when they are ready.

Our pupusa ($1.50), a thick cornmeal pancake, arrives golden brown from the skillet, its melted cheese and bean filling oozing out the side. The dense corn cake is served with a pickled cabbage slaw and mild tomato salsa, each adding pleasant acidity to the savory patty. The texture of La Brasa's tamale ($2) is creamy, almost pudding-like, giving it the consistency of soft polenta. Tucked inside is a mixture of tender braised chicken and beans.

Fans of all things crunchy will enjoy the tacos ($2) and empanadas ($1.50) here. The rolled tacos are filled with a bit of chicken and cheese, fried, and topped with diced veggies. Seasoned ground beef is the filling in the empanada, an orange-hued half-moon fried-up crisp.

If you can pry yourself away from the chicken, try an order of the carne guizada ($8.50). This homey stew is gently spiced, with tender cubes of beef and potato suspended in wholesome gravy. Carne asada ($10.50) is a slightly chewy but flavorful steak that is grilled to order and served with beans and pigeon pea-studded yellow rice. A super-fresh salsa made with green peppers, onions and tomatoes garnishes the beef.

Meals are served with salsas that go well with everything, from empanadas and tacos to steak and white rice. The mildest is a simple cilantro-tomato sauce; the spiciest is a pureed tomatillo salsa that is beautiful on the chicken.

The folks at La Brasa would do well to lighten up a little. Employees seem suspicious of customers who might be eager to watch the action (guilty), despite having a sparkling-clean, wide-open kitchen. I was told the owner doesn't like people to see how things are done, a comment that might scare off tentative visitors for no good reason.