The recent arrival of places like Mabel's BBQ and Proper Pig has provided Cleveland diners not only with the boundless delights of expertly smoked meats; it has also served as a sort of master class in the art and craft of barbecue itself. For many of us who grew up eating — and enjoying — grilled and sauced ribs, chicken and the like, those first tastes of peppery brisket, meaty dry-rubbed pork ribs and snappy sausage were honest to goodness revelations.

Now that we know how it can and should be done, we are better equipped to evaluate newcomers like Woodstock BBQ. Based on these standards, the new Lakewood joint has some growing to do. While we love almost everything about this casual eatery, the barbecue is a bit of a roller coaster ride, punctuated by highs, lows and so-sos.

Let's start high, shall we? Our group almost skipped the chicken wings ($9), what with a dance card quickly filling up with meaty mains, not to mention cold beer. Wings are everywhere, we grumbled. But then they came out, all copper-colored and glistening with a spice-speckled rub. Smoked, not fried, the wings are unencumbered by a mantle of breading. In its place is skin and meat, smoky, juicy, habit-forming meat. Though great on their own, they benefit from an occasional dunk in one of the three house sauces.

Those sauces include a thick, sweet, tomato-based Kansas City-style, a thinner, spicier, more multipurpose tonic, and an unconventional but interesting jerk-style sauce.

Woodstock's pulled pork is better than most in that it is pork that is smoked, pulled and served largely unadorned so that diners can savor the smoky, porky goodness. It's on the lean side, approaching dry, but it's tender and flavorful, garnished with only a drizzle of sauce. This is not sad, sullen crock-pot pulled pork. Get it in a sandwich ($6) or on a platter ($9) with cornbread, pickles and onions.

Woodstock's brisket also approaches greatness, but falls slightly short of the mark. Thick-sliced and sporting a nice dark bark, the meat looks promising from the jump (save for the unwelcome drizzle of sauce across the top). Soft and supple in the hand, with a jiggly little cap of fat, the beef has the feel of competition barbecue. A nice peppery rub gives way to deeply flavorful, tender, smoky meat. Overcooking, however, has wrung too much moisture from the brisket. Get it in a sandwich ($8) or on a platter ($11) with cornbread, pickles and onions. 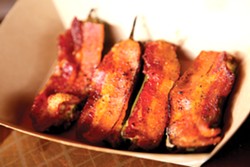 When our order of spareribs ($11 half, $20 whole) lands on the table, we instantly know that something is very wrong. The rectangle of meat is perfectly flat across the top, with no indication that bones even exist underneath. A dull, pasty rub covers the entire surface. Predictably, the pork is mushy not tender, grey, dry and bland, as though it was pre-baked or reheated. I'm hopeful that on my next visit I'll get to sample them straight out of the smoker.

Unlike many BBQ joints, this one does not sell a combination platter, a handy vehicle for diners eager to sample more than one smoked meat product. I'd also love to see the promised turkey breast and sausages begin to make appearances on the menu.

If you come with a crowd, order the loaded nachos ($9), a hubcap-sized platter layered with chips, cheese sauce, pulled pork, olives, tomatoes, jalapenos, and barbecue sauce. Woodstock also prepares an admirable version of stuffed jalapenos ($5), affectionately called Atomic Buffalo Turds within the barbecue community. Cream cheese-filled peppers are topped with bacon and smoked until they take on the pleasant whiff of campfire.

Also on the small, lined, handwritten (but photocopied) menu is a Brunswick stew ($5), a great way to utilize leftover barbecue. Like everything on the roster at Woodstock, sides such as cornbread muffins, baked beans, collard greens and mac and cheese are more than reasonably priced at $1 to $3.

Owner Robert Togliatti purchased the 100-year-old building, formerly Trio's Bar, and poured a ton of his time, money and passion into the renovation project. What came out the other end is an attractive, casual and welcoming neighborhood saloon with cheerful service. Diners enjoy a great draft beer list, wonderful bourbons and even a cocktail list. A bright and roomy barroom connects with a rustic dining room, complete with the requisite reclaimed wood paneling, skull and antlers, and cigar store Indian. A facade of accordion-style windows opens up and folds away, uniting the sidewalk patio to the interior.

If diners approach Woodstock more as a bar serving barbecue and less as a barbecue restaurant with a bar, I think expectations will fully, and satisfactorily, align with experiences.