Three great ways to avoid the downtown doldrums at lunchtime. 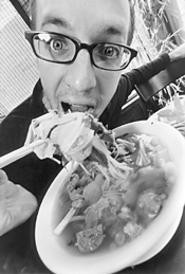 Walter Novak
For an invigorating break from the brown bag, warm up to #1 Pho.

Attention, wage slaves! When it comes to workaday lunches, you downtown types are a distinctly unimaginative bunch. According to our entirely unscientific survey, even the more sophisticated among you -- who would rather pluck their eyelashes out, say, than dine on Stouffer's mac-n-cheese -- are wimping out when it comes to the midday meal. "I'm a food-court kinda guy," confesses a usually suave fellow from accounting firm KPMG. "I brown-bag it," admits an otherwise chic head honcho at Edward Howard. But never fear: Café is coming to the rescue, with a trio of ideas for reasonably priced Asian-inspired lunches that are anything but average.

At noon, the high-ceilinged dining rooms at #1 Pho are flooded with daylight, and the air is redolent of hoisin and basil. Open since September, this snazzy Vietnamese eatery on the western edge of Chinatown finally puts to rest the notion that Asian-restaurant decor must fall somewhere between funeral home and Tiki bar. Rather, partners Hank Nguyen and Danny Nguyen have turned a formerly decrepit-looking tavern into a sleek, serene retreat.

Lively Vietnamese pop music plays softly in the background, while golden-oak plank flooring and walls shaded tomato and saffron make a classy (and appetizing) backdrop. Servers are friendly and eager to answer questions about the menu, which turns out to be an impressively large, neatly bound compilation bursting with enticements like shrimp-stuffed crêpes, shredded lotus root, and sautéed beef with lemongrass.

But for midday comfort -- and when do we need comfort more than on a brisk November afternoon? -- the go-to dish is pho, the traditional Vietnamese rice-noodle soup, ladled into white crockery mixing bowls that would look right at home on Grandma's kitchen shelf.

For the cautious diner, there is pho with thin slices of tender eye of round or with bits of chicken breast meat.

For the daring, there is pho with beef tripe or tendon. Then, feel free to get creative with add-ons: Want your soup hot enough to sear your sinuses? Pile on the jalapeño slices, the red chile paste, and a squeeze of fresh lemon. Looking for fragrant, sensual flavor? Stir in the thick hoisin sauce, crushed leaves of Asian basil, and a handful of bean sprouts. Or go nuts, as we are wont to do, and add a little of everything.

Pho, of course, is not the only type of soup on the menu. Vegetarians can cheer themselves with a steaming bowl of canh chua rau cai, a rousing sweet-and-sour broth crowded with pineapple, okra, celery, baby corn, pepper, scallions, and mushrooms, for fruity flavor balanced by a slow, subtle heat. Others can choose from seafood-lemongrass, tomato-crab, and wonton with shrimp and pork. Most of the broths are priced at less than $8 -- meaning you can finish with a high-octane glass of iced Vietnamese coffee sweetened with condensed milk and still get by for less than $10. Then, maybe scrape another 70 cents or so off the floor of the Buick and cross the street to Golden Plaza to snare a custardy cone of spongecake at the Golden Bakery. If there's a more invigorating way to restore both mind and body, we're betting it can't be accomplished over the course of a lunch hour.

In the case of the newly opened Indigo Indian Bistro, we hope three times is indeed the charm. Given how quickly tenants have come and gone from its location at the Prospect Avenue end of the Colonial Arcade, the eatery might as well have a set of revolving doors. But whatever factors caused the rapid demise of Wallaby's Brewing Company and Jo-Jo's Colony Tavern, the Zen-mellow, well-lit space overlooking the arcade is too welcoming to be at fault.

First-time restaurateur Amit Pandya took over the spot in late August and has enhanced the room's handsome glass, brass, and oak decor by introducing colorful Indian textiles in the form of wall-hangings, framed artwork, and giant tasseled floor pillows. Several muted television sets hang over the freestanding bar (which is stocked with Kingfisher, Taj Mahal, and Flying Horse beers, among other libations), and the air hums with innocuous soft rock melodies.

The menu includes both northern and southern Indian dishes, ranging from soothing vegetable biryani to pungent lamb vindaloo. But with most entrées priced in the lower teens, value-minded lunch guests head straight to the well-stocked buffet, to fuel up on an ever-changing selection of starters, main dishes, and desserts, as well as savory sides like delicate basmati rice, fresh-from-the-tandoor naan, creamy raita, and several chutneys.

On the day we visited, we chose from a dazzling array that included smoky, butter-soft tandoori chicken; thick, earthy palak paneer, with generous cubes of homemade cheese; and a spicy chicken tikka masala in a golden cream sauce. If the thin, salty tomato soup piqued with ginger failed to wow us, a dal bristling with lentils and kidney beans was substantially more comforting. And while purists will note that the food's traditional fieriness has been toned down to accommodate more timid Midwestern palates, a spoonful of hot sauce, from a tray at the end of the buffet line, can rectify that problem. Light-textured rice pudding (kheer), scented with rosewater and topped with chopped pistachios, placed a sweet exclamation point at the meal's end and convinced us that Indigo Bistro is the perfect refuge on days when the boss is running amok.

Sure, it doesn't radiate Century's panache. But Richard Baribault's Tea House Noodles location on East 12th Street makes up for a paucity of elegance with a fun, quirky ambiance and, more important, food that's tasty and healthy. From its space-age music and colorful mandala prints to its blue tables and orange-plastic stacking chairs, the Tea House is all about funk and verve. Although meal orders are placed at the counter, there is plenty of comfortable, spacious seating, just right for spending an hour dishing with co-workers. (A private dining room is also available for those with especially sensitive gossip to share.) And looking out the large front windows onto a peaceful, tree-lined street, it's easy to forget, for a while at least, that you're still in the asphalt jungle.

The focus of the small menu is the noodle and rice bowls, studded with tender-crisp vegetables, topped with a choice of piquant sauces, and perhaps garnished with chicken, shrimp, beans, or tofu. For those with a burning passion for, well, hot stuff, there is the fiery Balinese-style Rica Rica sauce with hot peppers, ginger, and sesame oil; for those who consider paprika the height of heat, the soy-and-shiitake-based miso-mushroom sauce is savory but mild. While the modest portions are fine for most appetites, fans of the all-you-can-eat buffet may want to supplement their noodles or rice with a fat, fluffy, steamed Asian bun, stuffed with finely chopped veggies and slathered with creamy Thai-style peanut sauce. And for liquid refreshment, a 20-ounce freshly squeezed carrot juice is a nutritious bargain at only $2.50. To think you were ready to settle for a bologna sandwich and cold coffee at your desk!