David Amstutz of Jack on the Bone, out of Massillon, spent years in the restaurant business before making the switch to a combination of catering and, as he puts it, "getting serious" about the rib circuit. He participates in roughly 12 cookoff events each year, offering up his smoked slabs at locations around Ohio and into West Virginia, Indiana and Canada. "Burlington, Ontario is the biggest rib event going up there and it's pretty intense," Amstutz says. 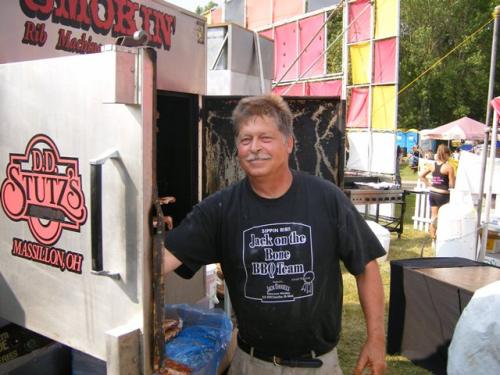 Being a ribber is not a glamorous profession. A completely mobile chef, Amstutz spends two laborious days setting up his booth. He has to construct a kitchen under tent, complete with attention-grabbing signage and a sturdy counter. Then, he and his team have to get the food ready on-site. Bringing only cases of pork and other basic ingredients, Amstutz foregoes pre-packaged or pre-prepared foods to make and cook everything right in front of the customers, saying, "It's the freshest product you can get."

He's assisted by a mix of family, friends and seasonal employees throughout the summer. This year his son-in-law Jamey, a school teacher, is ready to get grilling. His trusted assistants Peggy and Brian will be there to toss on the sauce, as will a couple of new hires. But Amstutz is more than a little nostalgic about losing the help of his daughter, who is moving to Hawaii this year. "I'll miss her," he says. "She's been there for me since she was just a little girl."

Planning out what to bring is also a challenge. One year a surprising turnout at the Columbus Jazz & Rib Fest meant slim pickings for barbecue lovers. Hungry smooth jazz enthusiasts came out in droves for
saxophonist Kenny G and Amstutz heard the crowd may have swelled to some 300,000. Not surprisingly, Amstutz marvels, "We had absolutely no idea what a big draw he would be."

Those planning to get saucy at this year's Memorial Day rib cookoff at Tower City can look forward to a Jack on the Bone menu that also includes beef brisket, a real roast pig, chicken breast and barbecued mushrooms. Even though burnoffs are events designed with carnivores in mind, Amstutz has found that "there are some vegetarians that come out." Amstutz's ribs are treated with a special dry rub then cooked slow and low for three hours. Jack on the Bone offers smoky, sweet and hot sauces, but it's the original recipe that still wins the most awards and a hint of Jack Daniels that sets Jack on the Bone apart. The Tennessee whiskey is spritzed on each bone for flavor enhancement.

I asked Amstutz if he ever got sick of ribs. While every year starts off in mouthwatering anticipation, he admits, "You always want to taste your stuff to make sure it is up to your high standards … and you have to sample around to check out the competition, but after a while it does get a bit old." — Samantha Fryberger

More Get Out!: Scene's Events Blog »

Get Out!: Scene's Events Blog