Just out on DVD, the Alan Freed Story revisits the Cleveland DJ's legacy 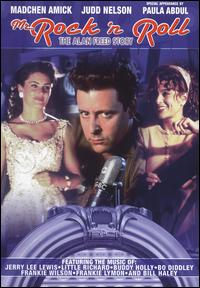 While its accompanying press release compares Mr. Rock ’n’ Roll: The Alan Freed Story to music-related biopics such as Cadillac Records, Dreamgirls and Ray, this film, just out on DVD, is hardly in the same league. Originally made-for-TV, the movie commences in 1956 as Freed (Judd Nelson) is hosting a big band radio show on a Cleveland radio station. One day at a dance, someone slips him a R&B disc. He spins it and the crowd goes wild. He eventually convinces the radio station manager to let him start playing R&B, and the rest is history. Early on, Freed hosts the Moondog Ball, what’s become known at the first rock n’ roll concert and some 20,000 fans show up to squeeze into a venue that only holds 8,000. Then, it’s off to New York and Freed, credited with coining the phrase “rock ’n’ roll,” eventually gets into the concert promotion business after he’s booted off the air because his radio show is deemed too controversial (Freed plays what is called “race music”). He recruits everyone from Buddy Holly (Joe W. Davis) and Jerry Lee Lewis (James C. Victor) to Jackie Wilson (Leon) to play on a concert tour that sells out every venue it visits. But money problems get in the way, and it’s not long before Freed’s business falls apart and he has to go back to DJing. He starts taking bribes from the labels to spin certain records and is eventually disgraced (even though the payola practice would continue for years). The movie’s factually accurate; it just doesn’t transcend its subject matter as Nelson is a bit too wide-eyed to play the shrewd Freed. And the drama between him and his lovely wife Jackie (Madchen Amick) verges on the stuff of soap opera. While archival footage and behind-the-scenes material would seem to be in order, the DVD doesn’t have any bonus material, either.