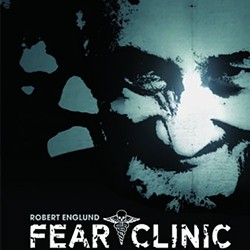 PHOTO VIA INSTAGRAM
The weather's getting colder, but Ohio's film industry is heating up.

Part of the team that worked on Miss Meadows, starring Katie Holmes, this summer in Cleveland were so impressed that they're back for Round 2.

Fear Clinic, a full-length feature film is currently being filmed in Medina. The flick is next in the recent string of movies filmed in Northeast Ohio, including Jenny's Wedding, Captain America: the Winter Soldier, and Ghostbusters 3 , which *may* begin filming sometime next year.

The horror movie is based on a 2009 web series, and features actor Robert Englund, who is best known for playing Freddy Krueger in the A Nightmare on Elm Street series.

In Fear Clinic, Englund plays Dr. Andover, a doctor who specializes in overcoming phobias. Most of the filming will take place in the old Sophia Huntington Parker Home for Pythian Sisters on North Huntington Street.

The cast was also filmed in the town square, capturing Medina's charming gazebo and Christmas tree in the background. Local restaurant Eli's Kitchen was the setting for a traumatic scene that is key to the story.

The film's publicist, Mani Isler, told the Akron Beacon Journal that Fear Clinic is "the most watched horror web series in history." The cast and crew hope that the film version will be finished in time to be released for the 2014 Halloween season.

The horror flick is one of many films to feature Cleveland and Ohio scenery, proving that Northeast Ohio is more than just a pretty face. We have lots of substance, such as the ideal small-town in America setting, to offer the film industry.

Cecily Rus joined Scene as a blogging intern in September 2013. She is a recent graduate of Colgate University, where she majored in English/Creative Writing. She has previously interned at Scene Magazine in Boston. Her interests include traveling, cheeseburgers and Game of Thrones. Cecily is a Lakewood native...
More
Scroll to read more Movie Reviews & Stories articles
Join the Cleveland Scene Press Club