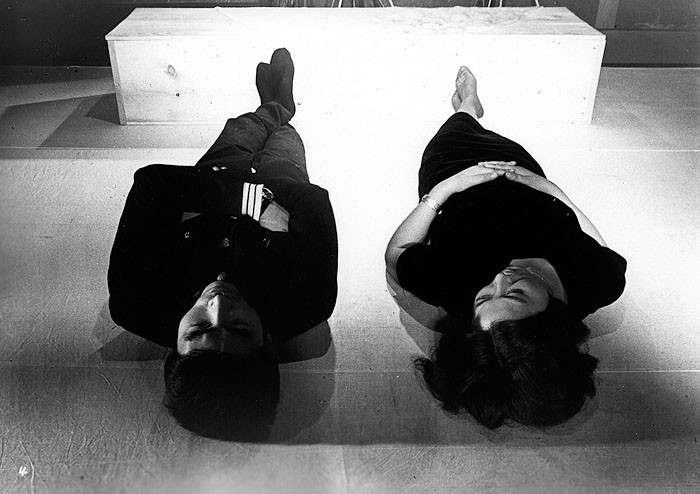 Although widely considered to be Japan's greatest living filmmaker, Nagisa Oshima is unknown to most contemporary North American arthouse habitués. The fact that Oshima has directed only one film — 2000's surreal gay samurai flick Taboo — in the past 23 years is partially responsible for this. But the lack of quality prints of some of Oshima's greatest works has exacerbated it. Thanks to the efforts of Cinematheque Ontario curator James Quandt, that situation has been rectified. In the Realm of Oshima, a touring retrospective of 18 Oshima films, many in newly struck 35mm prints, comes to the Cleveland Institute of Art Cinematheque in March and April as a two-part series.

"Discoveries" (March 5-15) showcases the eight rarest Oshima titles, including several that have never been theatrically released in this country. "Classics" (April 2-26) highlights Oshima's best-known movies, including 1976's In the Realm of the Senses (April 9 and 10), the film that inspired the series' punning title.

Oshima was a precursor to two of the most influential filmmaking movements of the mid-late 20th century. Like many seminal figures of the French new wave (including Truffaut and Godard), Oshima was a critic before directing his first films for Shochiku Studios. Being a radical iconoclast, Oshima chafed at studio-mandated restrictions and eventually started his own production company. For Oshima, cinema was a "revolutionary tool." He even went so far as to banish the color green from his movies because he considered it "too soothing."

And just as many directors identified with the German new wave (particularly Fassbinder) had examined the moral cost of rebuilding Germany's postwar economy, Oshima was regularly drawn to explorations of Japan's own postwar trauma. Quandt describes 1960s Oshima films like Night and Fog in Japan (March 8), The Sun's Burial (April 5) and Death by Hanging (April 16 and 17) as "total eviscerations of Japan Inc."

Yet, to fully appreciate later Oshima, it's important to have to have seen his nascent works. That's why In the Realm of Oshima provides such an invaluable service. The sexual gamesmanship and transgressiveness, the psychological and physical violence, and Oshima's über-Brechtian mashup of documentary techniques and the most outré avant-garde tropes all make perfect sense, if you've taken the time to familiarize yourself with the director's pre-Senses oeuvre.