A Q and A with Post Grad star Jane Lynch 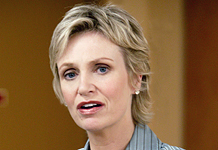 Born on the South Side of Chicago, actress Jane Lynch is yet another product of the Windy City’s Second City comedy group. Lynch, who continues to get mad amounts of work even though she’s now in her late forties, recently sat down for this one-on-one interview in Los Angeles to discuss her role in the new comedy Post Grad, where she plays the mother of a smart college grad (Alexis Bledel) who can’t find a job. She also discussed her career that includes spots in cult comedy hits such as Best in Show, Talladega Nights: The Ballad of Ricky Bobby and The 40-Year-Old Virgin.

Were you funny as a kid?
Yeah, I was funny as a kid. I do remember going out of my way to make people laugh, and I got in with this popular group of girls in high school by doing self-deprecating stuff. I got to be friends with the hot girls and go to all the good parties. I was the ambassador for my older sister who wanted to hang out with them, too. She wasn’t sufficiently grateful and took me for granted. I was like, “I acted like a monkey to get you in with this group!”

How’d you get hooked up with Second City?
It was one of those resumes I sent out every week. I knew they were casting for the touring company and I got called in for a casting audition. It wasn’t something I aspired to. I wasn’t against sketch comedy but I never went to a Second City show and I had never improvised. The audition was improvising and they chose two girls and I was one of them.