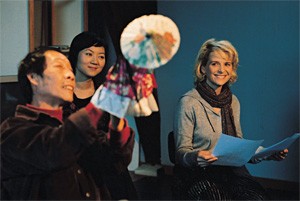 The Red Balloon was the art-house E.T. of 1956. Flight of the Red Balloon is something far more baffling — a literal-minded movie with an amiably free-floating metaphor.

Director Hou Hsiao-hsien — who only screened The Red Balloon after he was commissioned to remake it by Paris' Musée d'Orsay — has said the original shows the "cruel realities" of childhood. His own version begins as fantasy — as seven-year-old Simon (Simon Iteanu) addresses the scarlet sphere drifting overhead. Then it naturalizes, tracking the boy over the roofs of Paris to contemplate the untidy existence he shares with his mother, Suzanne (Juliette Binoche).

Almost immediately, the balloon's role is assumed by the Chinese film student Song (Song Fang), hired to look after Simon. A would-be guardian angel, she hovers in the boy's vicinity before locating the studio where his mom is rehearsing her new, Chinese-inspired puppet show.

As though shooting a silent, Hou wrote a script without dialogue — then discussed each scene with his actors, who had to invent their own lines. This surely accounts for Simon's diffidence as well as Binoche's splendiferous eccentricity.

Let's call her the spirit of the place. Paris apartments are cluttered, Parisian lives are messy, and the city is shown so congested that you can almost smell the exhaust fumes. To cope, Hou himself has adapted a looser, more lyrical style — using window reflections and shallow focus to layer and complicate the images. A movie that encourages the spectator to rummage, Flight of the Red Balloon is contemplative but never static, and punctuated by passages of pure cinema. A medley of racing shadows turns out to be cast by a merry-go-round. A long consideration of the setting sun, reflected on a train window that frames the onrushing landscape, yields a sudden flood of light.

Audiences have long been harvesting the riches of last year's Cannes Film Festival — Cristian Mungiu's 4 Months, 3 Weeks and 2 Days, Gus Van Sant's Paranoid Park, Alexander Sokurov's Alexandra, Asia Argento's performance in Boarding Gate. But Flight of the Red Balloon is in a class by itself. In its unexpected rhythms and visual surprises, its structural innovations and experimental perfs, its creative misunderstandings and its outré syntheses, this is a movie of genius.