A documentary about a group of women who enroll in a class on burlesque dancing, A Wink and a Smile has its local premiere tonight at 7 at the Cleveland Museum of Art. Here's our review of the film. 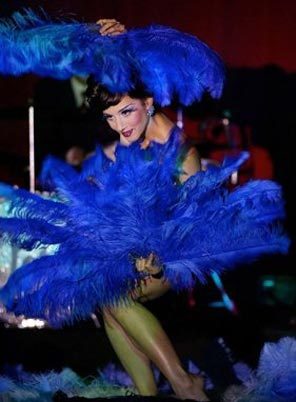 A Wink and a Smile (U.S., 2008) A documentary about 10 women who sign up for a class on burlesque stripping, Deirdre Allen Timmons’ film is guilty of overanalyzing things. In a series of interviews with the participants, we hear the usual things about body types and empowerment. Miss Indigo Blue, headmistress at Seattle’s Academy of Burlesque, helps the women develop their stage personas and learn dance moves during the six-week course. Behind-the-scenes footage includes classroom lectures (“please wear a tampon and cut the string”) and intimate interviews with the subjects. And yes, there’s plenty of footage of burlesque strip shows, some of which include brief bits of nudity. The film culminates with a show at a local coffeehouse. Indigo Blue calls the performance an “amazing spectacle” and then goes on about how much the participants’ confidence has grown. She gets no argument here, but that’s really stating the obvious in a film that tells more than it shows. **